Pulling a Jane Austen: Renovating a Dress, Again, for the Jane Austen Festival


It has long been no secret that Jane Austen's funds could be sparse, and that she tweaked and retrimmed her caps and dresses and whatnots to renew them, season after season. Rare was the woman who didn't refresh at least some of her wardrobe in this fashion.

I've done the same with the standby white wrap-front dress, which first debuted in 2011, and wore it to the Jane Austen Festival in Louisville last weekend.

This year it received new sleeves, French-style Grecian sleeves with no seam, that button across the top to hold them closed, green silk ribbon at the hem, and a green silk sash with an antique buckle, a gift from dear friend Sabine, along with the buttons. I have to say, the renovation made the dress feel the best it has yet. 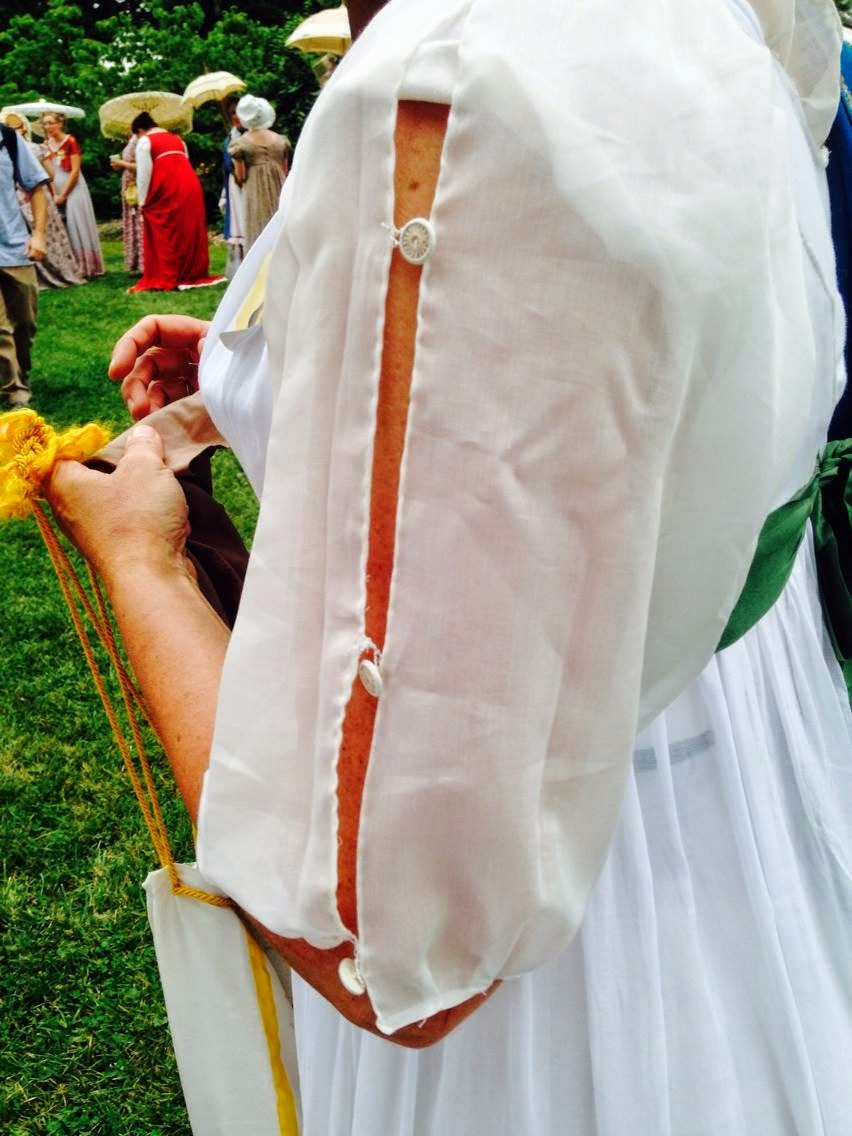 Jenni and her family, Laura, Polly and I attended the festival as the Merveilleuse and Incroyable contingent from Directoire France. Ah, what a day was Primidi Thermidor, the first day of the month named for summer heat! Most years Locust Grove shimmers under a hot, humid haze, and we thought to thumb our noses at the usually almost-unbearable heat by sporting muslins and French style: no sleeves or almost no sleeves, sandals, no neck-coverings, no outer coverings at all, really, unless you count my kid gloves, which I just could not keep on.

Being a bit barer than our compatriots from America and Britain, we did feel a little naughty. You can't help it when everyone else in costume is layered with handkerchiefs, chemisettes, even spencers, and multiple underpinnings. Excepting two young gentlemen who apparently had just walked out of the same pond Mr. Darcy did in that movie, hatless, jacketless and waistcoatless, but dry. Ye gods.

We were much cooler. Perhaps that accounts for the stares. Stares? Well, yes. That's what happens when you channel the Pre-Punks and Neo-Greeks of the 18th century. Some got the visual joke, and bless them for it.

The joke was a little on us, actually. For the first time in five years, the weather was reasonably cool on Saturday, and I was glad of my wool wrap for awhile. It was only hot for the promenade? Why? The weather gods just wanted to annoy us.

This year really was the best yet. Mr. Roberts and the captain and crew of the HMS Acasta outdid themselves portraying life in the Royal Navy; if you get a chance, read the letters received in a packet and opened that day with much excitement: they come from all over the world.


Jo Baker read from her novel Longbourn; Dr. John Mullen showed us the details and humor in Austen's novels that time and cultural shifts have hidden from us. There was excellent music and singing, archery, puppet shows, one of the best afternoon teas available in Kentucky

and the only that I know of from vintage bone china, the annual style show, really wonderful shopping, and best of all, the Promenade. Four hundred and ninety-one of us dressed up and bested Bath for the world record; at least for now, we bear the honor of holding largest Regency Promenade ever. It was quite a pretty scene and one you're unlikely to see outside a costume film.


You can read a fuller write-up of the day on Jenni's blog, Living With Jane, and "The Pioneer Times" recorded the entire event in photos. My camera was pretty much stuck in a too-small reticule all afternoon, so I took few pictures, fewer of which came out. My thanks to those who did take photos.

You all looked positively racy next to the other ladies ;) Pretty, though. Certainly more inspired by ancient dress than later in the period.

There is *one* recorded instance of a young lady here in Sweden, who was daring enough to go for a walk wearing thin french clothes with flesh coloured stockings. She was so mobbed by the boys she met, she needed help to get away from them...

Dear Sarah W.,
Thank you! Laura's dress really did feel Grecian or Roman, in an odd way, since the Roman-style dresses I've made actually end up giving a person a great deal more coverage. Still, the feeling was there.

Poor girl in Sweden! She probably didn't expect *that* much attention.

What a lovely re-imaging of an older dress! I'm particularly fond of your sleeves. So pretty!

The Jane Austen Festival looks like such fun! I hope to make it there next year. :)

Thank you! The sleeves are really comfortable. I might put in a few more pleats at the sleeve ends: they still feel a bit loose. In hot weather, though, those sleeves are comfortable: no binding, and extra air flow. Not that 95% humidity airflow is much improvement, but hey, any bit is better than none.

Very best, and please do come to the festival next year. Think you'll really enjoy yourself so many people, including me, would be chuffed to meet you.