In the Corset Cover Dress Diary posts I wrote about having trouble creating fine machine hems around the bottom of the corset cover. The seams connecting the fronts and backs of the garment kept clogging the hemmer because the amount of fabric was too much. I wrote,

"It's impossible to do around the seams, though, so you have to stop near these eges and hand hem them afterwards. Not terribly efficient. Once you have a well-fitting pattern, might as well hem each piece BEFORE you seam the pieces."

So I asked the folks on TreadleOn, a super-duper online community for those who use treadle machines. Always warm and helpful, several Onions gave me tips on how they deal with the issue. I've reproduced several of them here, with a few edits for context.
Thank you, Onions!
Posted by ZipZip at 2:42 PM No comments:

From the Rag Bag: a Scrap Quilt for a Baby 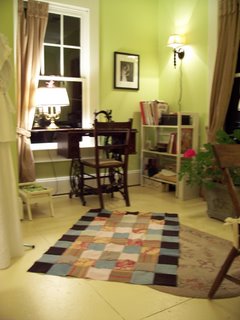 My sister Julie and her husband are expecting a baby boy, so I thought they might need a quilt for June Bug, as they're calling him.

Not a fancy quilt for display, but a hard-working utility quilt that he can play on and drag around, and that can be tossed in the wash. So, taking a page out of the past, I resorted to the rag bag and have assembled the simplest of quilt tops.

At left, the completed quilt top

Rag bags used to be common: when clothes and other textiles outlived their original uses or began to look tatty, they'd be recycled. Small pieces would end up in a rag bag to be pulled out later to live again as cleaning rags or quilt block pieces.

Over time I've filled quite a fat rag bag. Any piece of clothing too ratty to be given to charity was cut up and the buttons and zippers saved for reuse. For this quilt I pulled from the bag remnants from some of my husband's old striped oxford shirts, a couple of pairs of jeans and other slacks, and bits of fabric left over from a skirted table project. 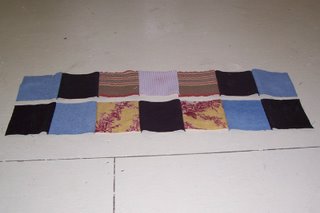 Each quilt block is just one piece of fabric, cut 5 inches square. Once all the pieces were cut, I laid them on the floor and played around until I got a pattern I liked.

At left, two samples of blocks sewn together into strips.

Then I sewed strips of blocks together, making the seam allowance the width between needle and edge of the presser foot, which is about a quarter of an inch. After that I sewed the strips together. 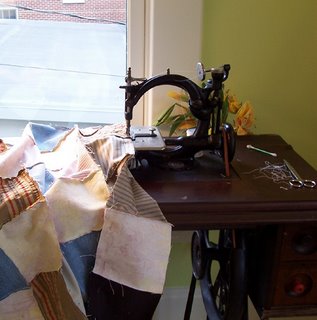 I only had to pay careful attention to a few things. I had to line up the blocks on each row when sewing the strips of blocks together. No matter how careful I was, not all blocks were exactly 5 inches square. After all, I used scissors when cutting them, not a rotary cutting wheel, and they were cut out of bits of fabric, not nice neat "fat quarters" meant for quilting. To make up for this I pinned the each strip to the next very carefully, easing each block to fit to the next, easing just like I might a curved seam on a collar. It worked pretty well! Only one row is rather too far off.

At left, the strips of blocks are sewn together on the Willcox and Gibbs chainstitch treadle machine.

Now it's time to embroider "June Bug" on a block and then add a thin cotton batting and a backing of plain blue check fabric. I will bind the outside edges with a heavy-duty quilt binding.

Posted by ZipZip at 2:42 PM No comments: 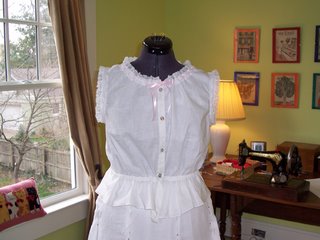 The corset cover is complete. Here it is at left. Compare this image to the photograph of the original in the 1911 textbook I drafted it from, which appears below. I think they are quite close, with one exception. I have a 30-inch waist, and the original was for a 24-inch waist.

The cover is comfortable to wear, and fits as it should, which is a relief!

I believe this is a typical schoolgirl-type corset cover, utilitarian and effective under opaque shirtwaists or bodices, but not meant for dress-up wear by any means.

I will be using this piece for nightwear instead. With a pair of "bloomers" or tap pants it it ought to be both cool and a refreshing change.

Posted by ZipZip at 9:33 PM No comments:

If you are interested in period advertisements, catalogs, magazines, scrapbooks, diaries, and ephemera, do see the digitized collections that Harvard and Duke University have online. 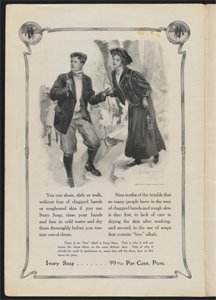 As Harvard describes it:

Includes such representative items as

Part of the Rare Book, Manuscript, and Special Collections Library. Includes items such as

Posted by ZipZip at 8:37 PM No comments:

Hooray, almost finished with the corset cover! Just have to add buttonholes and the internal waist tape, and it's done. Meantime, I have added the lace to the neckline and armcyes (armholes), which was a bit of an adventure in itself.

At left, the corset cover as it stands now. The internal waist tape is not pulling in the waist as much as it will, and the front is pinned together.

Perhaps I was a bit silly, but I was bound and determined to have as finely finished an effect inside as outside the corset cover. No raw edges, nothing to fray, and everything as neat as neat.

Even after reading the directions out of the 1917 guide American Dressmaking Step by Step (on vintagesewing.info) that say that you can hide raw edges on beading, I didn't "get" it.

So here's how to do it the long way. 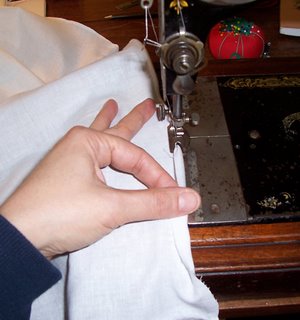 Hem the edge to be decorated with as tiny a hem as you can manage. My Singer handcrank has an attachment that can do a 1/8 inch full hem. It's impossible to do around the seams, though, so you have to stop near these eges and hand hem them afterwards. Not terribly efficient. Once you have a well-fitting pattern, might as well hem each piece BEFORE you seam the pieces.

Above or left, the Singer VS 27 handcrank with the small hemmer in operation.

Measure the lace so that it reaches 1 and 1 half times around the edge to be decorated. Gather it by sewing in the little margin (it's about 1/8 inch wide and looks like a mini selvedge edge). I ended up arranging the gathers so they looked a little bit like open inverted box pleats or ruching and very much like the effect! 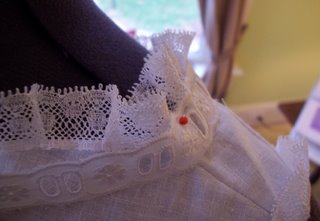 Then baste the lace to the the edge of the area to be decorated, with raw edge of lace on top of right side of fabric, and its selvage next to the outer edge of the fabric.

After that, cover this tiny basted seam with beading (sewn with a seam to each side of it) so there are no edges showing. You have to fold out the lace so it sticks out over the edge of the fabric. This is fiddly work! Too fiddly, I say.

Above or left, the lace being pinned to the neckline.

The easier way also results in no hem inside and probably a flatter, slightly less bulky result. If only I had read those instructions more closely!

Here's what you do. On the fabric to be decorated, say a neckline, fold the raw edge from the inside to the outside and baste it flat against the right side. Now inside you have a perfectly smooth surface, no hem, no edges.

On the outside, now gather the lace and once again baste it to the edge...but this time, face the lace so that its pretty edge already falls out over the edge of the garment, and the selvedge edge is sitting on top of that raw turned-in edge. Baste down. 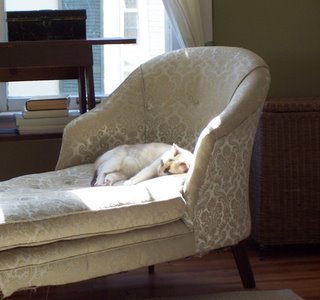 Then baste and sew the beading (one row of stitching to each side) over the combo of the basted lace selvedge edge and the raw edge of turned over neckline hem and voila...all nice and neat and tidy.

Man, did I feel silly! I was just fixated on internal hems and didn't realize I could do them externally as neatly. Oh well.

Next up, the buttonholes and buttons. Until then, bye now!

At left or above, my kitty ZipZip asleep on a chaise in the March sunshine. She's in my lap right now, too.
Posted by ZipZip at 8:14 PM No comments: 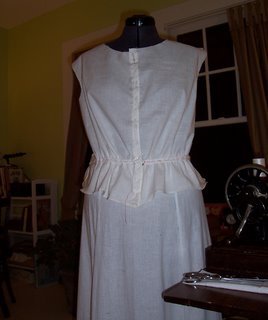 The latest project: drafting and constructing a circa 1911 simple corset cover of muslin.

Just a reminder of how someone might have worn one. The 1905 Butterick sewing book I have a reprint of states on p. 33, "for ordinary waists [shirtwaists]...a well-fitted corset cover answers about the same purpose as a lining [on a fancy bodice]." So one would put on a chemise and knickers, or a "combinations" instead, then the corset, then one of these corset covers and a petticoat, then the shirtwaist and skirt on top.

(Above, the corset cover partially assembled. Set on the stand inside out, I have basted the channel for the drawstring tape over the waistline gathers.)

Once again, I am using the 1911 manual, Textbook on Domestic Art, as the source for making up this garment. See the Cornell University HEARTH site, and browse for it. You can view and download each page. The directions appear on pp. 86-96, and comprise 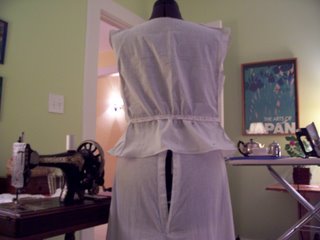 This particular pattern produces a corset cover with an interior waist drawstring or "tape", and then a short peplum that helps keep the corset cover in place. Many corset covers don't have such a peplum; you can easily find them on Ebay. The textbook photo shows a simply trimmed garment with modest lace at neck and armholes, and the directions say that armholes could be simply bound with bias tape, although you could make a corset cover with all kinds of decoration from tucks to beading, or make it of eyelet fabric.

(Above, the corset cover with waistline tape channel pinned to it, from the back) 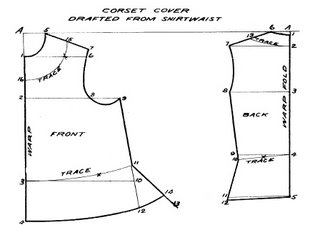 The pattern only requires two pattern pieces, front and back...but the front is split into two pieces for a total of three pieces. I drafted it in about two hours, including checking it and cutting it. Remember though that I am a slow worker; someone with a bit more experience could knock it out rapidly. There is also an oblong piece of fabric that you cut out to make the channel for the interior tape or drawstring to go through.

The "model" measurements for this pattern are about 15" across the shoulders and and a 24" waist. My 30" waist circumference resulted in a more boxy-shaped pattern, but the result on the manniquin still looks good.

(Above: the pattern draft sample as it appears in the textbook. The numbers are drafting points you use to build your own draft, not measurements.)

Notes on Cutting and Construction

(Above, the Singer 27 handcrank sewing machine used for this project. It does wonderful tiny stitches and uses really neat attachments, sans electricity.)

That's where I am to date. Back with the final product soon as it's done!

Posted by ZipZip at 8:54 PM No comments: