Vernet is alive and well in this household, thank you. I may be more than a year behind, but it's a wonderful dress that should see the light, and so little by little it moves ahead.

Let's have a look at some embroidery stitches, shall we? In I Spy Eyelets, we discovered that my first choice of embroidery thread, a high-twist, dense thread, produced some pretty coarse work. It really was not very nice. Each stitch produced one thread, since this was not floss, and even working as carefully as I could the stitches looked messy.

Methought, this is not efficient, and thus that extant research and the realization that all three of my original eyelet pieces used soft, low-twist thread. As importantly, the embroiderers used more than one thread at a time to gain more coverage per stitch and to help more stitches be nicely lined up together.

Thus it was that I switched mid-project to a vintage German floss. Thank you, Sabine. It's ducky stuff.

The embroidery continued. Late winter, in a sunny spot, sitting in my favorite chair, whose maker lived before eyelet embroidery was popular, an interesting thought. 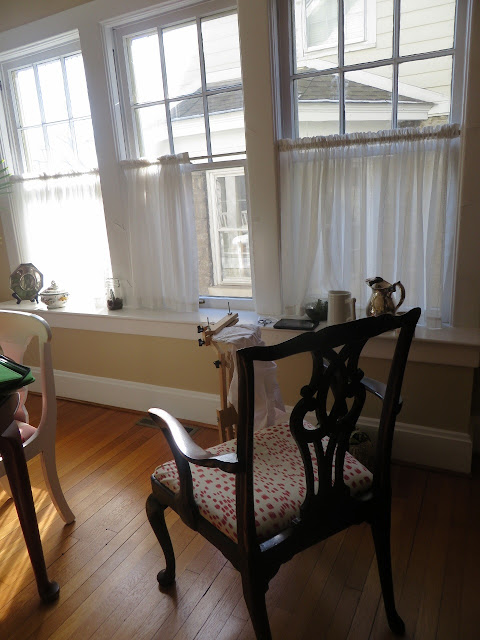 As winter turned to spring, more embroidery upstairs to an equally sunny corner in the guest room. Always sunny, because my eyes hurt so every time I embroidered, and the migraines that have made for so many unhappy, unproductive days and nights in our household were trying to return. 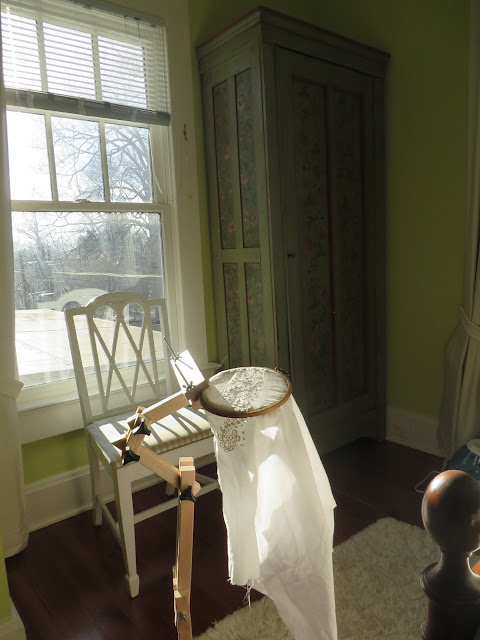 I took a break and turned to sheep, and the headaches mostly left me alone. Poor dress, she appeared doomed to wither.

Then I couldn't get her out of my head. Isn't that the way it happens so often? That what isn't good for us is the very thing we desire to do the most?

Embroidery, hardly a vice, until it interferes with health and thus the smooth running of family and work life. Anything good intself, cannot be a good if it harms anyone.

Dumb dress, silly dress, sillier fashion plate. I couldn't get her out of my head. The dress is, after all, a classic, eminently wearable design, timeless, and worn in just the right conditions, almost contemporary.

Thought to change the way I worked. I needed not just sunshine, but very short sessions, 15 minutes or less. Just one or two little eyelets at a time.

This has worked, and so the dress comes back. With improved embroidery. 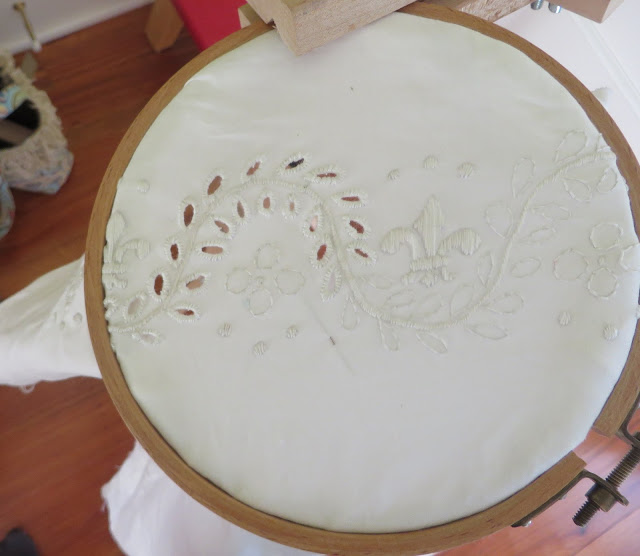 Three threads of floss per stitch. 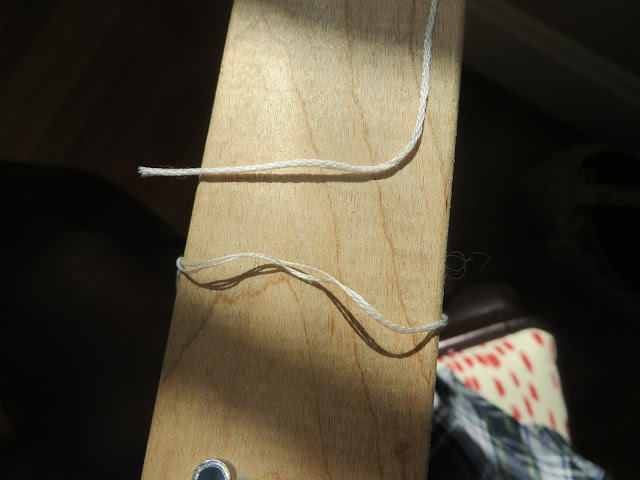 As of today, just a few little eyelets left. Just a few.

Jenni of Living With Jane just left a little while ago, after fitting a bodice mockup to me. I took an old dress designed in the so-common round-gown-with-drawstring mode, and cut out a copy bodice. Then we looked at a more "modern", 1814-ish dress (in Die Kostuemsammlung der Familie von Bassermann-Jordan), and I adjusted the cut. I basted the pieces together and then Jenni fit the mockup to the more streamlined cut. Now it awaits cutting out in percale and sewing up.

Jenni is helping our friend Emily design and make her own Regency dress, in much the same way. It's the way we know to build dresses now, and apt to the Regency period. Though Curte's mother recalls that her mother could look at a dress on someone, go home, take an old dress and with it, old newspapers as pattern paper, and a fitting, make just about any dress. Some dressmaking skills just carry on, generation to generation.

That, however, is for another day.

This morning as I write a wood thrush is singing outside the open window, the song one of the most beautiful of any American bird. The thrushes are migrating to the northern woods. May his or her trip be safe and successful, and may they nest and bring beautiful babies, like this baby, to add happiness to the world.

Lana is a good mother, protective and loud when she protests us holding her baby. Nina is almost as loud, but up a few octaves. in calling for her mama. Here she is: 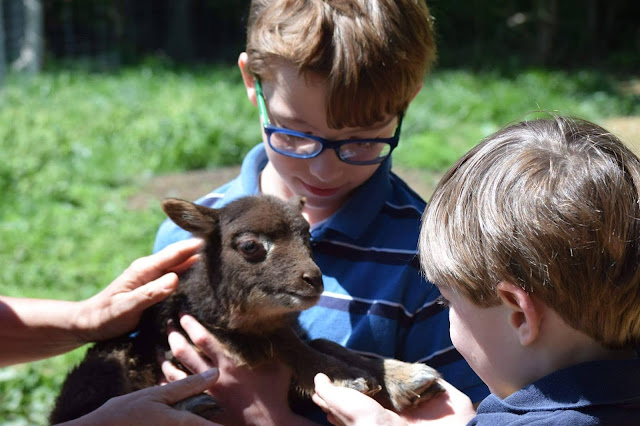 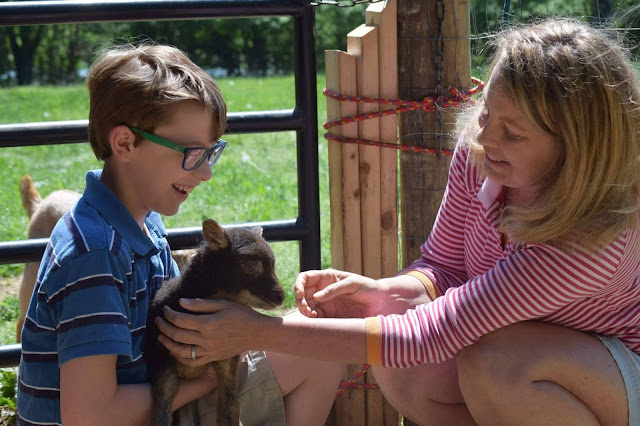 Mama sheep tend to check on their lambs when they nurse, and nudge them around with their noses so that the lambs remain near their sides. Sheep wag their tails madly when happy and Sara Dunham of Punkin's Patch up in Cynthiana says that a lamb who is nursing successfully nursing will wag its tail while drinking. No tail wag? He or she may be having trouble latching on. 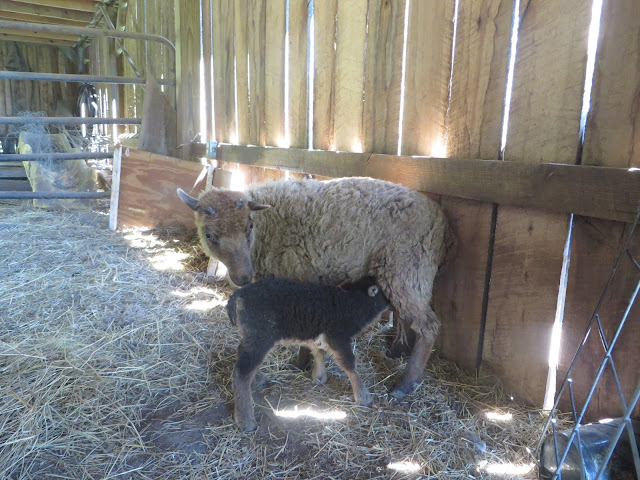 Now they share a maternity pen with both outdoor and indoor spaces with their relatives, and the lambs, just days old, are bouncing around. Now I understand what gamboling means: springy hops with front legs, back legs, all legs! Sidesteps, mincing, prancing and fidgety dancing. It's adorable and hypnotic.

You can read all about Laura and Chris' new flock babies at Square Peg Farm. You'll see Kelly's just-born lamb and its first steps, and meet all the mamas and their little ones.
Posted by ZipZip at 9:13 AM 4 comments: