A Pleasant Interlude, Drawing and Painting 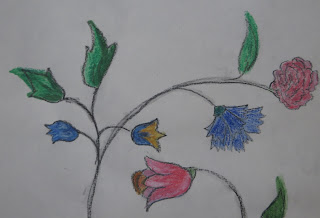 Has it been over a month already, since the last post? Checking the calendar, apparently so. It doesn't seem that long.

Late summer has a way of contracting and stretching at the same time, doesn't it? Contracting, in that there's a last urge to enjoy summertime, before school begins. For us, that was some three weeks ago. Stretching, in that outdoors the days are still long, still dreamy, still inviting you to watch the ripening world. When I've been able to, that's just what I've done.

Things that grow seemed to be asking me to draw and paint them, so I've switched gears and have pulled out the pencils. Long in love with eighteenth century floral drawings, especially those on textiles, and especially those that were more demotic, calligraphic, impressionistic, than naturalistic, it seemed right to draw that way. Carnations grafted to bachelor's buttons, daisies to roses, ivy leaves and bamboo leaves feeding the same stems.

I've looked at images of textiles on museum sites all over the world, choosing the Chinese designs since they have appealed the most. I've compared the styles, varying by unnamed artist and by time period, compared reedy wiggly designs with those whose flowers burst in sprays, those with narrow wandering stems, those with fat brown stems, those with more naturalistic flowers, those with imaginative takes on flowers that never were.

Common to them all: inked drawings at base, white under flowers, and washes of color from a limited palette, rapidly, loosely, almost poster-ishly applied when you look at a little more than brush-length distance. This was decorative art, not fine art, made for use, not for a frame, but its brush freedom is just beautiful to me, its disregard of staying within the lines as much intentional as hurried and with an eye to maximum dollar return, at least to my eye.

Then I read up on pigments and paints used during the period, and which were used on what, and about the exchange and mixing of designs and colors among the West, South Asia, and East Asia. Complicated, but oh, so much fun! You could study color for a lifetime. 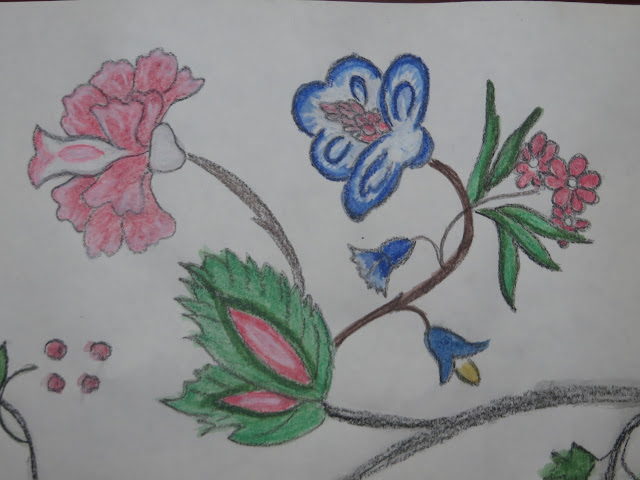 Finally, itching just to draw, out came plain No. 2 pencil and bond paper, and later, watercolor pencil and brush, and a slightly higher grade of paper. First, straight copying, to get the muscles understanding the shape and muscle of the designs, then freehand drawing and finally, as comfort increases, a slow development of my own style in the genre.

Here below, an unfinished watercolor pencil drawing. When done, the wandering stem will launch flowers and leaves to every reach of that paper. 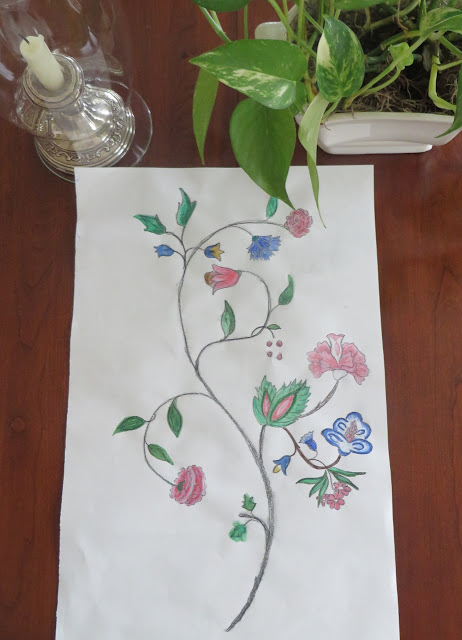 The two views earlier are very close up, this one is at about a normal distance the eye might be from the work.

Looking at the drawing critically, there should be more yellow: cadmium yellow has replaced the orpiment (a rich lemon yellow) that was used then but is, as so many of their paints were, toxic. There should also be a red, too, a vermilion. Vermilion is still available, thank goodness. Many of the colors here are fudged, since the colors originally used are either no longer available at all, even by natural pigment companies, due to their toxicity or lack of color fastness, or even if still made for oil paints, for instance, aren't sold by Prismacolor or the other company whose black pencil I bought.

I've been drawing flowers seemingly forever, at least since junior high, when Medieval manuscript illumination was all I could think about after school. Later it was bell flowers and acanthus leaves, after 1780s wall paintings and applied plaster decorations. Still later, Rapidograph ink drawings, colored in with pencil in one or two spots, of flowers in windowsills. Take-offs, I guess, of mid-century illustrators. Who knows? It was back in the '80s. Finally, for some twenty-plus years, impressions of just-picked flowers, drawn in a limited palette on cards to friends and family, drawn from the head, hardly from nature. Now, I'm more than ready for a new foray, but back into an older style.

What a blast. Let's see where this leads over time.

Before we go, here's what the boys have been doing, or one boy, in particular: making sure his brother's animals have their lunch. 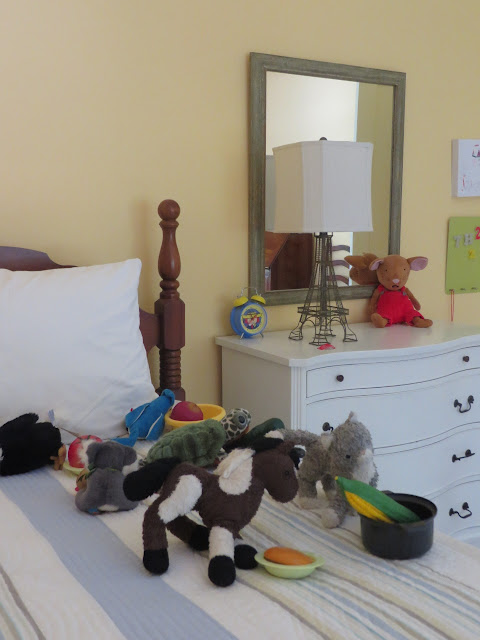