And Now, the Weather Report 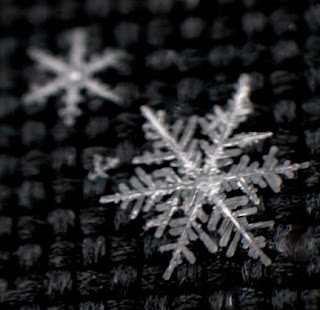 Posted by ZipZip at 6:23 PM No comments: 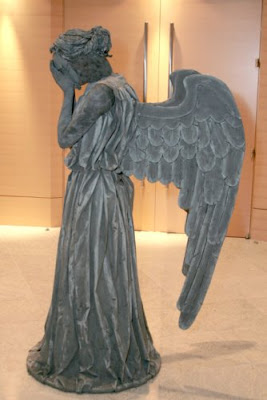 Hallowe'en is almost here, it appears. Did some fiend nip a statue (with aid of a backhoe) from a cemetery and move it to this hall?

Look closely...it's not so...the statue breathes. It's real; it lives.

It's a lady in costume.

The angel left me in wonder, and so I had to see how she was made. The maker was kind enough to detail the process. Her ingenuity is as striking as the final effect.

See Beware the Weeping Angels on the Crafty_tardis Livejournal site.
Posted by ZipZip at 5:16 PM 3 comments:

Black Walnuts: The Harvest and the Cake 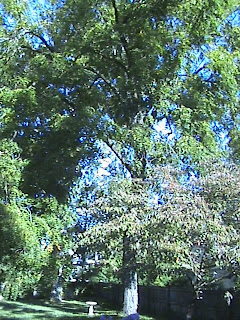 It's that time of year: black walnuts are littering the Kentucky Bluegrass. The last few trips out to my in-laws, I've passed patches of roadside where hundreds of nuts lie waiting, and out at the farm, Erma and I have examined their walnut trees. Most are heavy with nuts, and we've started to collect them from the ground. Every once in awhile one of the tots comes up, crying "Ba! Ba!" not for sheep, but for "ball", and presenting me with a walnut, which in its husk is, in fact, shaped very much like a tiny basketball and even has that bumpy surface.

When she was a girl, Erma and her sisters used to lay their finds on the road to their farm so that when the car drove over them, the thick husks, spicy with a green, peppery scent we both love, would break open. This past week we found quite a few husked that way in the little track that leads to the garden; Robert's and Ann's truck must have done the job when they loaded up vegetables. For the rest, I made do by stamping on them with my sneaker.

Walnut-loving, patient Kentuckians all over are gathering up black walnuts and soldiering through the difficult process of extracting the delicious, rich, fragrant meats from the shells. A labor of love it really is, too...the husks stain and the shells are so hard that they're used in commercial abrasives.

Our family is among the group of gatherers, for besides the trees at our in-laws, we can go to the back yard to collect them, because we're blessed with a large, lovely, sinuously shaped tree that bears well most every year.

This is a multi-step process.

The nuts come in a yellow-green, thick, hard-but-fleshy husk, and you have to get that off, first. If you leave the husk on so long that it turns brown and rots, some say it will ruin the nut's flavor, although I've not found that.

Complicating factor? The husk has a juice that will stain you, your clothes, even concrete. Folks made dye of it in past years. 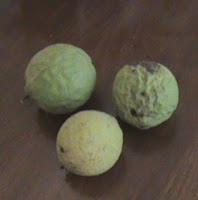 Cure the Nuts in Their Shells

I've read recently that the nut flavor is improved if you set the nuts aside for a few weeks to cure. Don't pack them too deeply or they may mold; I've read that two or three layers deep in a box is about right.

Note: I've neglected to cure the nuts with no ill effects. 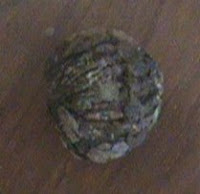 Black walnuts have unbelieveably HARD shells. I've read that soaking them before cracking them helps, but no one in my in-law's family bothers with that, to my knowledge.

Photo: a black walnut in in its famously hard, furrowed shell

A normal nutcracker will not crack a black walnut: you might just crack the cracker. Only commercial operations are able to crack more than one nut at a time, too. Regular folks are left with cracking the nuts one at a time.

Lexington and the surrounding little towns used to boast several places that would husk and maybe shell nuts you brought to them, and even buy them from you, but sadly, fewer people gather the nuts these days.

So, tools of choice in my in-laws' family? 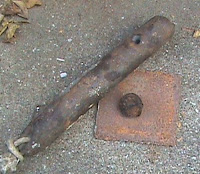 Pound the nuts on concrete with a flat iron (the cast-iron type that predate electric irons), or place the iron bottom-up in your lap, place the nut on it, and hit it with a hammer. Pick out the meats with a nut pick.

Photo: getting ready to crack a walnut. The cracker is an old window-sash weight, of cast iron; a fragment of sheet iron is the base on which the nuts are cracked.

My method? Place the nut on a piece of cast iron, take an old cast-iron window-sash weight, and, holding it horizontally, one end in each hand, strike the nut smartly. Then pick out the pieces. The interior of the shell is a tightly packed maze, so it's really hard to get whole meats.

All methods result in a certain amount of nut meat loss, and you invariably introduce bits of shell in with the nuts, but my mother-in-law says that this goes with the territory. 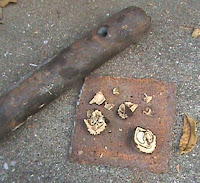 About two pounds of nuts will result in a cup of nut meats; it takes me an hour to crack that many. However, since you only need a cup's worth for a cake, that's okay!

Photo: the walnut, cracked. It took one blow to split the nut, and then a few lighter blows to get the meat free of the shell pieces.

Since the cracked nuts are oily, like regular walnuts, you should use them within a few weeks or so of cracking them, but you can freeze them to get them to last longer. My method is to just crack what you need, and store the rest in the basement out of the reach of squirrels and other pests. Don't put them near the furnace: if the nuts dry out too much they'll be spoiled.

These nuts will go in about anything that a regular walnut will go in: cakes and pies, and fudge, on top of salads, and so on. Then there's black walnut ice cream, which is hard to find commercially, but oh, so good.

The flavor of this nut is very rich, and it has a spice, a ring, an edge to it that regular walnuts do not, but the edge is not bitter. It's woodsier, maybe. The freshly cracked nuts are fragrant, too, with an elegant scent that reminds me of expensive Austrian cafes as much as it does country cooking. The scent has a similar richness that coffee does...it draws the nose. 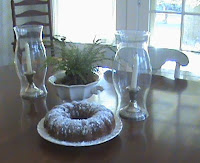 Last Friday afternoon, while the tots played around me, I cracked a cup's worth of nut meats, and then Saturday morning as the sun was coming up, commenced on this cake to take out to my in-laws.

Wouldn't you know I was carrying coals to Newcastle? Saturday was also the Old Union Christian Church auction, and Erma bid on and won a butterscotch pie, cream pull candy, peanut butter rolls, multiple kinds of fudge, crabapple jelly, and grape jelly, all made by the church members. They didn't need a cake.

They got one anyway, and Erma says she loves anything with black walnuts in it, and I comfort myself with the thought that the cake will freeze well.

By "tests done", they mean that a toothpick or tester inserted into the cake center will pull out cleanly. However, I'd watch the cake carefully and test several times...and at the first instant this happens, out it comes. Mine had pulled away from the sides of the pan like most cakes do when done, and was a rich brown, but maybe a little darker than it should have been, and was just a little drier than I'd like.

The result was still delicious, a fairly fine-crumbed cake with a faint vanilla flavor and strong taste of walnut, with the added bonus of small nut chunks for texture and extra flavor.

This recipe makes a sizeable cake. It doesn't need icing; I just dusted a little confectioner's sugar on it, but you might consider soaking it with bourbon over several weeks, for a keeping cake. I am going to try it, because the combination sounds irresistable.

It makes a good tea cake and very nice dessert to follow a fall dinner...the stronger flavors go well with the last of the tomatoes, with squash and pumpkin, with "soup beans" and the first of the fall stews.

Here are a few interesting bits about black walnuts; there's more out there and this was unscientifically gathered, so better resources may exist.