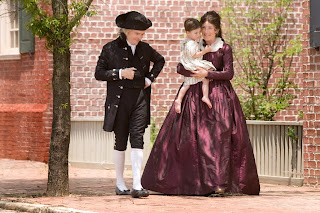 I am slowly completing posts that conclude the construction of the bodiced petticoat and both open robes that have been in progress these many months...they are taking a good long while to do because the closer the event came to which we were to wear them, the less documentation I made.

In the meantime, there is a good bit of material about the Dolley Madison film that PBS made, online.
Right now I cannot get the film itself to play, but some of the 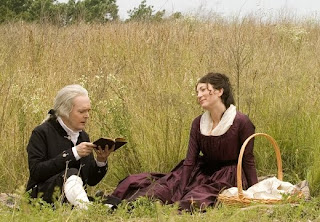 behind the scenes items work. For example:

On YouTube, a good many bits seem to be preserved.
Top two photos: early scenes from the film. 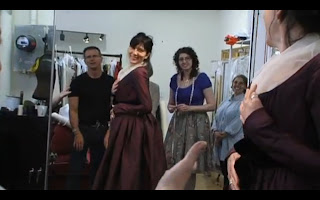 Why am I especially pleased? Because fairly early on in the film, we see Dolly in the 1790s, the era our sewing group has been studying. And the look of that dress you seen in the photos above? That's one of the looks we aimed for. Handsome, isn't it?  Dolley's gown is a round gown, but shares many of the characteristics of the gowns we have designed...and I see a round gown, in plum, of course, in my future, not to mention her hairstyle, which is handsome and understated.

The costume designer video puts the fashions of Dolley's lifetime into costume context, and how they traveled from late 1780s to the the end of the Regency era we know so well. It's well done. She also offers some detail into how the fit of gowns changed over the years. Important! For example, in the screen capture above, you see the very tight arms, the residual conical shape of the stays beneath the dress, but the boufy front created by both the bodice gathering and the fichu.

Do enjoy. I cannot wait to have a look at the film!
Posted by ZipZip at 1:12 PM 3 comments: