Next weekend is our annual Ladies' Tea Guild annual retreat, and I am in a hurry to finish a big-brimmed Edwardian hat for the occasion. In usual fashion, I procrastinated on completing what I thought would be the difficult part of the hat preparation: steaming a plain hat into the required shape. What a surprise, then, when the steaming and shaping process took less than 10 minutes, and was completed with burns or tears.

The Effect for Which This Hat Aims

One of the prominent antique clothing dealers offered a mousquetaire-style hat recently. Oh, for a glimpse of D'Artagnan! One side of the wide brim is turned up raffishly, while the rest of the brim turns down to frame the face. The requisite plume fluffs out the back, too (although if you look closely, the plume is actually an entire, and I hope artificial, bird). After the reference to dashing young bloods, the milliner turned from 17th century France to tastes entirely feminine, for she, and I am quite sure it was a she who added this extra bit of drama, ruched the entire underside of the hat in iridescent peacock-blue shot silk that goes copper in some lights. To balance things out, a row of ruching adorns the top of the hat as well. Voila...a marvel.

The Hat Base, Pre-Steaming

For the hat base I am using the High Crown Straw Hat (SH-955) sold by Jas. Townsend and Co. It has a 6-inch brim. The hat is quite well made, as advertised, although one should be aware that it's still a country hat...the straws are coarse-ish. This not your couture hat with straws as thin as buttonhole thread. 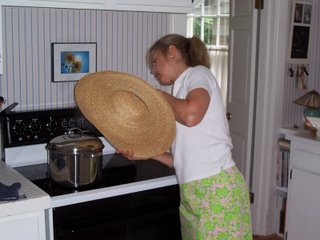 To steam the hat I followed suggestions made by kind members of the Sense and Sensibility Patterns Forum.

At left: steaming hat brim to soften straw fibers so they will bend. The steam is escaping from a small hole in a pasta pot. Click picture to see larger shot...it shows amount of steam coming out.

Here's what I did:

Not having a teapot to create steam with, I found a large pasta pot with a tight lid but a closable hole cut in it to let excess steam escape. 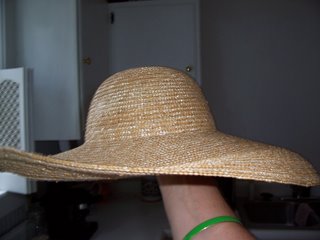 Here's the result! Next step: trimming. That's for another post.

Posted by ZipZip at 3:14 PM No comments: