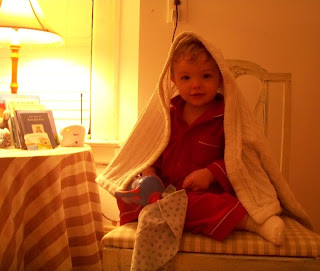 To all mamas and daddies from their sweet little tots,
To all family and friends, from their little buddies,
With love.
Photo: Christopher at bedtime.
Posted by ZipZip at 8:37 PM No comments: 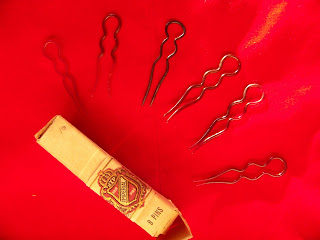 First, hairpins! They appear to be made of a sort of plastic, but they vary a good deal in color and pattern, which I am not used to plastic tortiseshell pieces doing.

The box, labeled "Imperial", isn't much help either. I have no idea how old they are but thought them fascinating.

Photo: six tortiseshell-patterned hairpins from a box of eight.

Second, a length of black bauble trim! It's fun to hold, as the cord is silky and the baubles, which are shaped like tiny short cylinders, bang around in a satisfying way. Again, no idea how old this is. 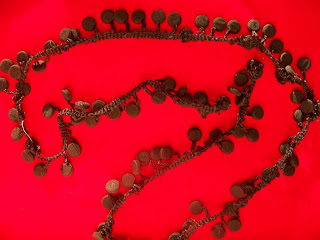 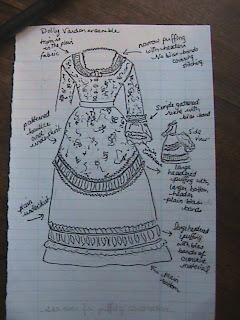 Note: As June 2012, this project has been on hold for some years, since Regency projects intervened, but I may take it up again.

Having the proper corset ready, courtesy Originals by Kay (Kay Gnagey), and having made the proper bustle with the Truly Victorian Grand Bustle pattern (TV 108), the next step in the Dolly Varden ensemble project to design the dress.

I've been playing around with various designs and every little while have examined fashion plates and photos anew to refresh and check the design ideas. It is quite apparent that there is no one Dolly Varden design...the term was bandied about loosely. Most dresses presented a vaguely eighteenth century look, featuring a polonaise or polonaise-style overskirt and brightly colored fabrics or sometimes striped fabric. Most dresses lacked a train, but some had them. See A Brief History of the Dolly Varden Dress Craze in this blog for details.

Photo 1: A Dolly Varden dress design...not the final one. 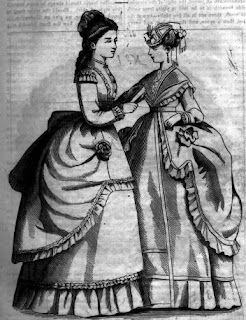 The first design, which currently pleases me most, is dominated by a poufy overskirt. Have a look at the figure on the right in photo number 2.

The pattern would be a variation of one published in January, 1869 and titled Pannier Overskirt, featuring a split front with a nice little updrawing just to either side of the hips, recalling panniers, and much poufing in the back.

The pattern published with the plate is actually for the figure on the left. Here are the original instructions (thanks to Couturiere Parisienne, again):


... made of claret cashmere, and trimmed with frills of the same and satin piping to match.
The tablier front is to be cut double, and without a seam down the center; a notch will be
found o one side of it, and a corresponding notch on one side of the rounded side breadth,
showing how these two pieces are to be joined together. The back breadth and side breadth
are joined by the corresponding notches. Both sides of the panier are alike; when the
breadths are all joined, the edge of the side breadth is to be laid in plaits from notch
to notch; there are in all five plaits... and a satin rosette added at the side where the
first (top) two plaits are arranged. A crinoline bustle should always be worn beneath this
kind of skirt.
Yet I can alter the panel to make the figure on the right! Take the front panel and split it down the center, and then extend the side panels across the back. Examine the two figures and you can see that this can be done, yes? Here's how I'd toile it, anyway:
Google has placed the 1869 Peterson's volume online, so the pannier overskirt pattern is available. See page 77.

The underskirt in the pictured design is lovely but doesn't really suit the floofiness of many Dolly Varden originals: it's too severe. Therefore, I would probably include headered puffings with bias band trims (see the second design option below), which were so popular during the period.
I also like the way the bodice in the right-most figure is treated, although by 1872 the waistline had fallen a bit. It's rather clever: the bodice lines form a vee shape, reflected in the upside-down vee shape of the overskirt. Also, can you see the reference to an 18th century neckerchief in the wide falling bodice collar? I can. With some care, I could I would probably try to alter a Truly Victorian pattern to make the bodice. If I chickened out? Just change the bodice design to the ubiquitous square-necked design offered by Truly Victorian (TV 400).


For fabric, bodice and overskirt would be made in a an eighteenth century-ish beflowered pattern, while the underskirt and trimmings would appear in a plain French blue. Since a Dolly Varden dress is usually meant to be simple and informal, I am doing a first version in an inexpensive cotton waiting in the stash, flat-lined in more cotton to give it more body. I know that it will likely not give the drape that the original wool would give it.After all, wool drapes crazily beautifully, or a crisp silk, which drapes ditto, only crisperly, would do that too. I can only hope that making it up that with the cotton won't be depressing. Grrr.

Design Option 2
The second design of interest is more my own, and includes elements common generally that year, with only the fabric and the slightly bell sleeves with eighteenth-century style sleeve flouncing to mark it specifically as a Dolly Varden design. Have a look at photo number 1. Frankly, it's probably better for the cotton I have, being simpler and less reliant on drape, darn it. It would also look super in a flowered lawn or voile. 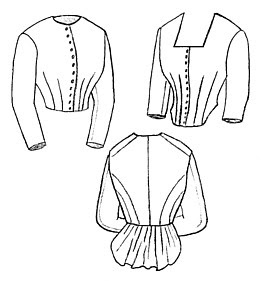 In this version, the bodice is a basic square-necked look(again, TV 400), trimmed at neck edge with a tiny tightly gathered lace or voile frill. The overskirt is the common apron-front design, gathered up at the sides and then falling in a fluffy, polonaise-y pouf in back. Both bodice and overskirt would be made of the flowered fabric; again the underskirt and trim would appear in the plain fabric.

Besides the apron and pouf, the main elements are the trimmings. Trim was what distinguished so many dresses in this period. It's been surmised that now-common sewing machine made making trims easier, so dresses began to be loaded with them. 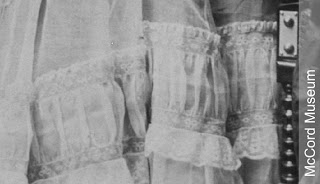 In this dress, the trims are all variations on puffings. The neckline features a narrow puffing with a header on each side; in the center front, about the button closure, there is a small bow. The overskirt is edged with a wider puffing, the stitching on either side of the puffing covered with a blue bias band. Above the scantily flounced underskirt bottom is a similar puffing, even a bit wider.

Photo 4: An example of a large puffing applied to a sheer skirt. The puffing itself is the gathered puffy band in the center. To either side a band of insertion has been sewn to hide the puffing stitching. At the top edge is a gathered header; at the bottom is a very scantily gathered lace ruffle. Detail of photograph of a Mrs. Davidson, Montreal, Quebec, 1870-1871. McCord Museum.

Because puffings might get in the way, the sleeve cuff area features a simple gathered ruche, the stitching covered with the blue bias banding. The sleeve ends are flounced like they might be in the 18th century, with scalloping, and inside are faux undersleeves in white voile, similarly scalloped.

I've found a good overskirt pattern that has a fullish apron front, a nice lift up the sides (with tapes), and plenty of pouf and length in the back. The overskirt pattern in Jean Hunnisett's Period Costumes for Stage and Screen (plate 19, view F) will work, reports Heather McNaughton of Truly Victorian patterns. 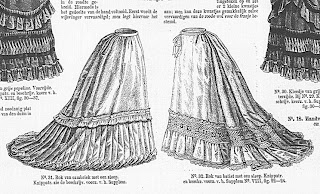 I plan to set a fluffy, highly flounced petticoat over the bustle. I'll use the Truly Victorian skirt pattern TV201 as a base pattern, but trim it as lavishly as I can. De Gracieuse has several plates focused on petticoats. Here are two examples of trained petticoats from 1872. I like the version on the left with the pretty ruche with bias band applied to the center, but not having time at present to attempt a knife bottom flounce, would
replace it with the gathered flounce at the right, edged at bottom with Valenciennes lace.

A red-letter day! Cornell University's HEARTH site put much of Harper's Bazar online...from the magazine's inception in 1867, in fact, until 1900. I am enchanted.

One of the sources for high-style fashion news in America, the magazine's engravings are superb, and the text is full of fashion news, sewing and needlework instructions, fashion plates, articles and poetry, and in every other issue, a full set of patterns, too. Sadly, Cornell has no plans to post the pattern supplements. I wrote to ask them about it and they replied the same day.

Here is a sample of text describing the carriage dresses featured on the July 18, 1868 cover:

1. Dress of blue silk, with tablier simulated by a puffing of the same, edged with narrow black lace, which begins at the waist, and sloping on each side borders the entire bottom of the dress, excepting the front breadth. Two similar rows of puffing, separated by black lace, are set above this on the bottom of the skirt. A row of silk bows, composed of four loops without ends, are set down the middle of the front breadth, in the manner of buttons. Large carriage mantle, with "full slashed sleeves, of black cashmere, lined with rose-colored silk, and trimmed with gold fringe and galloon. Black lace bonnet, with gilt diadem, and red rose and leaves at the side.
Fig. 2. Dress of changeable silk (gorge de pigeon) trimmed with a box-pleated flounce. Black lace mantelet attached to the bonnet. Corsage half low, with white muslin chemise Russe. Sleeves tight, trimmed with three silk folds. Belt edged with a bias fold of silk. Half long gloves of peau de Suede; changeable silk parasol, to match the dress, lined with white gros de Naples, with wide changeable fringe.

Some of the plates and patterns in Harper's Bazar are the same as those in De Gracieuse of the Netherlands, and the supplements for that magazine are available online (see my Fashion Plate and Photo Sources list for details). Why are the patterns the same, you might ask? Because Harper's Bazar took much of its content from Die Modenwelt in Berlin, which in turn seems to have copied Paris fashions.* America still leaned heavily on Europe for fashion instruction in those days.

The posted pages are fairly well scanned, although many seem a little dark, and the text is fully searchable, a real boon.

* The book Producing Fashion: Commerce, Culture, and Consumers, by Regina Lee Blaszczyk (University of Pennsylvania Press, 2007) states that Die Modenwelt was published across Europe, using the same fashion plates, in some 13 languages. De Gracieuse, I surmise, was one of these.
Posted by ZipZip at 8:40 PM 4 comments: