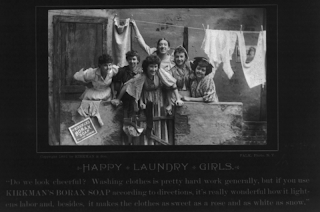 Amy of A Day in 1862 found a a receipt for washing clothes in a scrap book and copied it for us. It's titled "Warshing Clothes" and it begins...

"Build fire in backyard to heat kettle of rain water.
Set tubs so smoke wont blow in eyes if wind is pert.
Shave one hole cake of lie soap in boilin water.
Sort things, make 3 piles:..."
Do read the rest...you sure get an interesting sense of what it was like to wash clothes, and to reflect on it afterwards.
Photo: Girls in a tenement on laundry day. An advertisement for Kirkman's Borax soap, a replacement for homemade lye soap. Image courtesy The Library of Congress; LC-USZ62-59211.
Read the post >
Posted by ZipZip at 8:36 AM 1 comment:

If you watch films set in the Regency era, like the 1995 Sense and Sensibility film, you might get the impression that women wore little plain squares or triangles of lawn to fill in the necklines of their low-cut, high-waisted dresses, or nothing at all. The little triangle is commonly known today as a fichu and seems to most filmmakers rather unimportant. 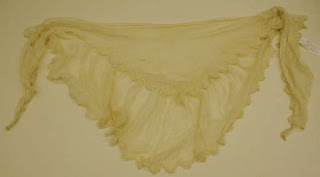 Note: Click on the photos to see larger versions of them. The photos of the fichu in my collection are especially big.

Photo 1: My antique fichu. It is made of Limerick lace and dates to between 1820 and 1835. More details below!

Photo 2: triangular fichu of white mull with buttonholed eyelets worked around the zigzag edge of the upper triangular sections and ruffle applied to lower section. Three-piece made with the large ruffled triangle forming the under section. Length (approx.): 91 in. (231.1 cm). Gift of Miss Amy M. Pleadwell, 1959 (C.I.59.17). Metropolitan Museum of Art.

Perhaps since then you have gotten the idea that chemisettes are the more correct thing to wear, whether plain or tucked or ruffled or ruffed. Yes, chemisettes were very common indeed, if paintings and miniatures and fashion plates and literature are any guide, especially for wear during the day.

Yet there was a world of fichus out there, too! Square-shaped, triangular, rounded, or long and narrow, a host of shapes, in lawn, yes, but often in net, too, and other fabrics. And decorative? Highly. Embroidery classical or Eastern, sparse or almost Baroque in its richness, fabric ruffled, layered, scalloped, ruched.

Photo 3: Long, narrow fichu. 1799–1821, European. [no medium available]; [no dimensions available]. Gift of Mr. Lee Simonson, 1939 (C.I.39.13.95). Metropolitan Museum of Art. Based on the photograph, the base of this fichu is of either a very sheer fabric or of net. It is embellished with ruching of more opaque-ish fabric. 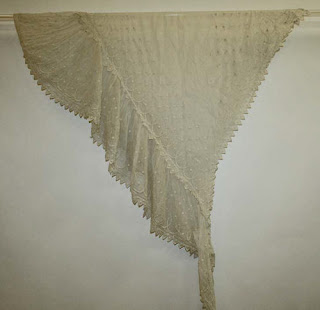 Fichus, popular in the 18th century (and maybe before: I simply haven't read), carried on in popularity, more or less, right through the Regency, the Romantic era, the mid-century, the high-Victorian era, and to some degree in the Edwardian era, before rather falling away to become a quaint relic. Each era's fichus are somewhat unique in design, their shapes and embellishments matching the prevailing fashions.

Making a Regency Fichu That's More than a Square: A Few Suggestions

The below is not an exact how-to for a particular fichu style, but more a listing of ideas and sources. Before I found my antique fichu last week, I was well on my way to designing my own based on a remnant of fine embroidered fabric salvaged from a heavily damaged garment.

Research
The first step is to look at pictures. Paintings and portraits give you an idea of how women wore them, but rarely how they were shaped. Try searching the Web for paintings and drawings by Ingres for example, have a look at the paintings and plates in La Couturiere Parisienne and see The Sangamon Settler blog for a series of 1820s portraits. Fashion plates mostly do not show shape details, just suggest them. Therefore, your best bet if you don't have a museum collection near you is to go looking within online museum collections. 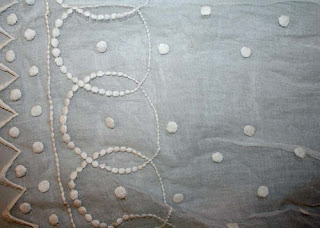 The Metropolitan Museum proved to be my best source, and that is where all of the photos in this post of fichus other than my example hail from. The Powerhouse Museum also has some online, and I imagine the Victoria and Albert does, too. A simple search using the word "fichu" will work.

Sadly, not all items in any online collections are dated or give dimensions, but enough do to give you a pretty wide variety of shapes and embellishments to work from. While I was looking at examples online, I paid very close attention to observing embroidery and kinds of embellishment, and tried to get a sense of what styles went in and out of fashion. For example, very early Regency fichus, like early Regency dresses, seem to feature two-dimensional embellishment, while the later Regency fichus, like the dresses they adorned, were more shaped and beruffled. Embroidery designs morphed too, from severe classical effects with the formal feel of an Adam fireplace embellishment, or clean, almost wiry, airy designs, to the more exuberant, rounded, fluffy shapes that marked the advent of the Romantic era. East Indian designs also appear.

Materials
Cotton or silk net (you can get it today from Judith Hats and Millinery Supplies, and I have seen it on Ebay as an import item, but have never bought from those sellers) was a common base for fichus, as you can see.

Dharma Trading carries lawns and gauzes, while Farmhouse Fabrics carries other sheers. Some silk sellers on Ebay and some importers appear to carry fine sheer fabrics, but I have not ordered from any to date. 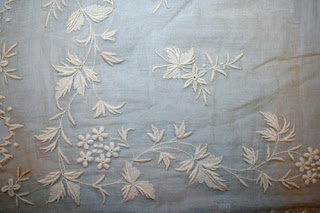 Whether you use net or lawn or gauze or another appropriate sheer fabric, you can cut your fichu in a variety of shapes. The pictures above give you some options, and Frances Grimble's The Lady's Stratagem has quite a number of pages devoted to making shaped fichus. Some of them work best for the late Regency and Romantic eras, but some patterns and ideas will work for earlier decades, too.

Later Fichus
From mid-century on, fichus are a staple item described in women's magazines. Sometimes engravings portray the latest fashion so that the smart woman can spot the right one in the shops, and sometimes directions were given for making them. Have a look at the sites listed on my Fashion Plate and Photo Resources page. You'll find Harper's Bazar and the Peterson's, Godey's, Paris Modes, and more. A little patient viewing should turn up all kinds of later fichus.

Last week I purchased a net lace fichu (see photo 1) from Pieces of History. It dates to between 1820 and 1835 and is made of Limerick lace. 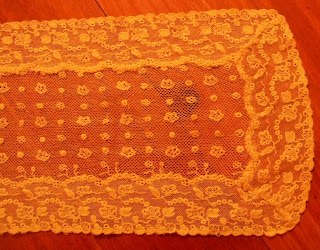 The fichu is some 5 inches wide and about 44 inches long. It is made of two panels, each 22 inches in length, joined at an angle at the center. If you look on the reverse, you can see that the lace is rather roughly sewn.

Photo 8: Detail of one end of my fichu.

Each panel is made of a long piece of net in two grades of holes...large in the central area, and edged on one long side with an approximately one-inch band of very fine-holed net. The net appears to have been manufactured this way. On the other long side and the ends just strips of the edging have been cut out and somewhat roughly sewn to the central panel, while the corners are mitered, the pieces being joined with overcast stitches. However messily the joins have been made, the thread used is so terrifically fine and the small net so small-holed that you can barely tell how it is constructed and at a few inches distance cannot tell the right side from the wrong side, except for the center join of the two panels. 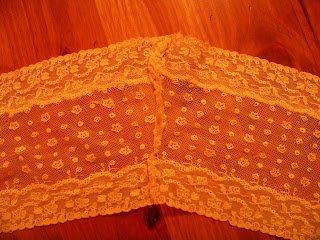 Limerick lace is not a true lace at all, being actually embroidery upon net, either tambour or needlerun embroidery. My example is clearly made by needle. Fairly fine thread is wound around, satin-stitch-like, multiple holes in the netting to create small circles, and around single holes to form lines. Filling stitches of a type I cannot identify fill leaf shapes. The Therese de Dillmont book mentioned above describes the process.

Photo 9: detail of back side of my fichu, showing central join of the two panels.

This fichu's lace is quite provincial and light-hearted compared to other, high-style examples of Limerick lace. Higher-style pieces feature far more intricately sewn patterns of acanthus and other floral elements.

Finding an Antique Fichu of Your Own

Amtique fichus are common in museum collections and turn up regularly in antique lace dealers' holdings (some dealers are listed under Sewing and Dress Resources in the links at left) and on Ebay. They can be reasonably priced, although early nineteenth century pieces tend to be pricey unless heavily damaged or very simple. If you are wanting a real fichu to set off a very special Regency dress, you might consider looking for an antique one (searching via the word "fichu" will do nicely). Not that I'd wear a museum-quality piece, but there are some out there that can be worn, with care. I saw several other ladies at last weekend's Jane Austen Festival in Louisville also sporting the real thing.

If your pocketbook is limited, you might consider rescuing a heavily damaged piece, and repairing it carefully. The Therese de Dillmont book details a method of darning holes in net -- with the darned section featuring the same honeycomb pattern.

If you intend to wear your fichu for an outdoor event or one in which your clothing might risk damage, I'd never suggest wearing the real thing, for in your effort to recall a time now passed, you risk damaging or destroying an artifact that has somehow survived.
Posted by ZipZip at 9:30 PM 5 comments: