Hippy-Hooray! A Pair of Hip Pads to Attach Directly to the Stays

It's not too easy to find extant hip pads, those second and third quarter of the eighteenth century tubelike or boxy protuberances worn over the stays to give the hips, and the skirts over them, a little extra oomph and ooh là là. Some mantua makers sell them, such as the Village Green Clothier, and some reenactors have made them, including a pair recently made by Kitty Calash. Among costumers, the larger pannier, made with cane or boning, are quite popular and create a dramatic hip line.

The circa 1770 English gown I am making is designed for fairly relaxed, informal day wear, so while I made a pair of panniers some years ago, methought semi-dramatic hips were more in order than gargantuan basket hips. Sarah Jane Meister, from whom I purchased my stays, sweetly sent the remnant of pink linen that the stays were covered with, so I took that and designed a pair of hip pads.

Many of you may already be familiar with the Boston Museum of Fine Art's banana-bright pads, complete with their original, worn strings. They were my immediate inspiration, and it would have been fun to have made them with yellow chintz, 'cept I didn't have any of that.

I was also a little leery of strings and more strings around the waist:


equals five sets of tapes, equals extra inches and a nearly sure rat's nest of knots.


Though guess what? The tape ties are made of wool!  Ha, ha! Evidence that I can use my handspun wool on the tape loom to make narrow tape ties as needed.

Anyhow, the excess string business. What to do about it? Then I found the stays below in the Met's collection, and lo, there were hip pads attached to them already, sans strings. Wish answered.

Do you see the pretty remnant of block-printed fabric used to create the European pads? What fun, what good use of scraps.

I've peered and peered at these images, and believe that they are tacked to the stays with thread. The dimples in the pad fabric lead me to believe that. Something else to notice: these pads are not exactly works of art. The pads on the Spanish stays are compact and nicely shaped, a bit like kidney beans. The European pads are apparently rectangles of fabric stuffed, and none too neatly. These were purely utilitarian addenda to the human shape :}

My cues for shape are the MFA pads. Because the pads form a crescent, it seemed to me that the skirts would like more neatly and naturally on them than on sudden squarish bumps.  Here's how I did them.

A blog post about the making of a farthingale roll, I think, gave me the needed tip. Sure wish I had written down or remembered the maker in order to give them credit!

First, the stays were donned, and the waist measured. Then I laid out the measuring tape in a waist-like ring on a piece of paper, and sketched in the rough shape of my waist in stays. Then I drew in a pad shape on one side of the "waistline". I estimated the Boston pads at about three inches wide at their widest. Drawing the shape into a crescent was easy: you can see that it's rather natural to do this given the shape of the waist. 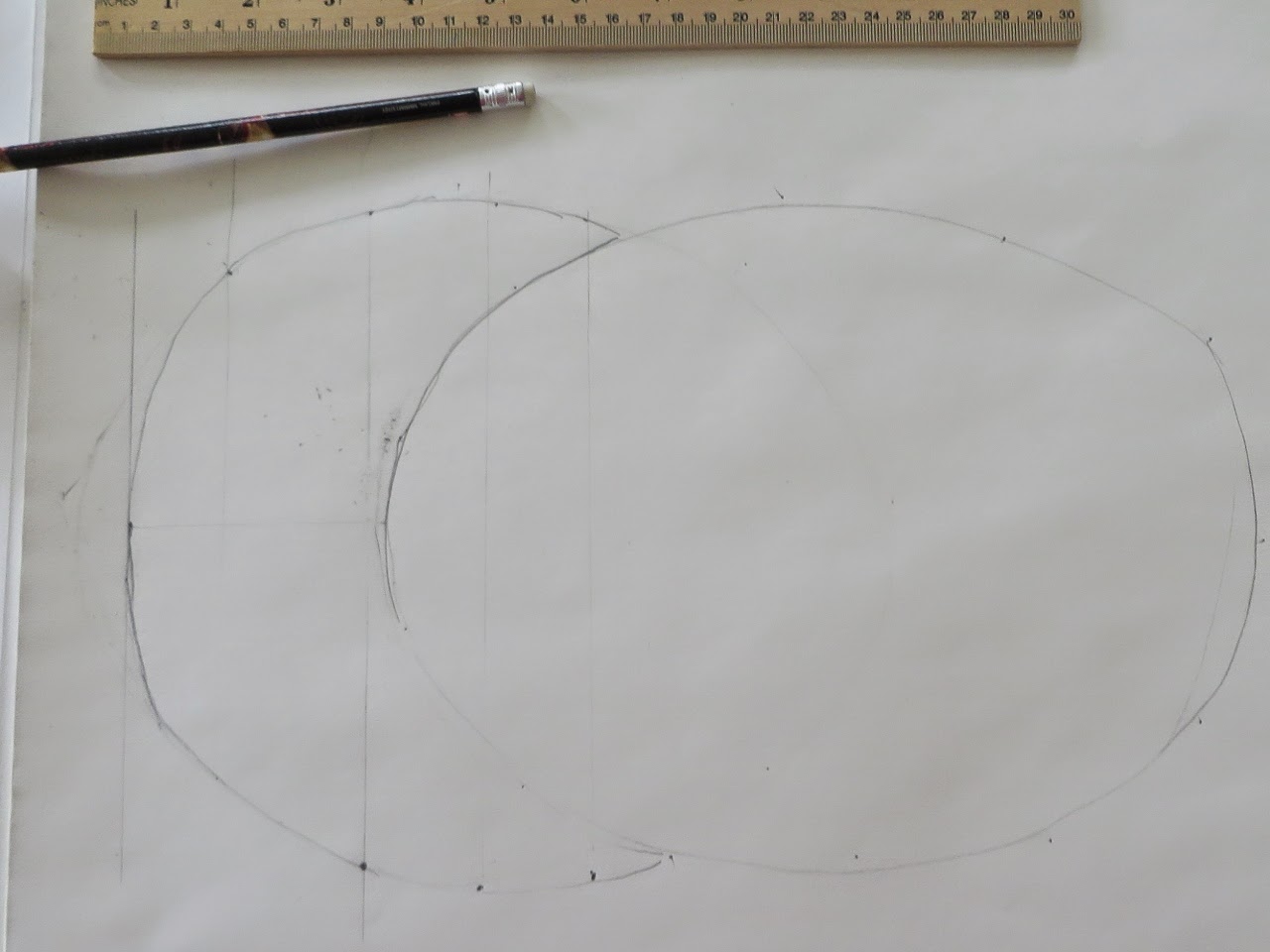 Next, I cut out the pad shape with scissors. 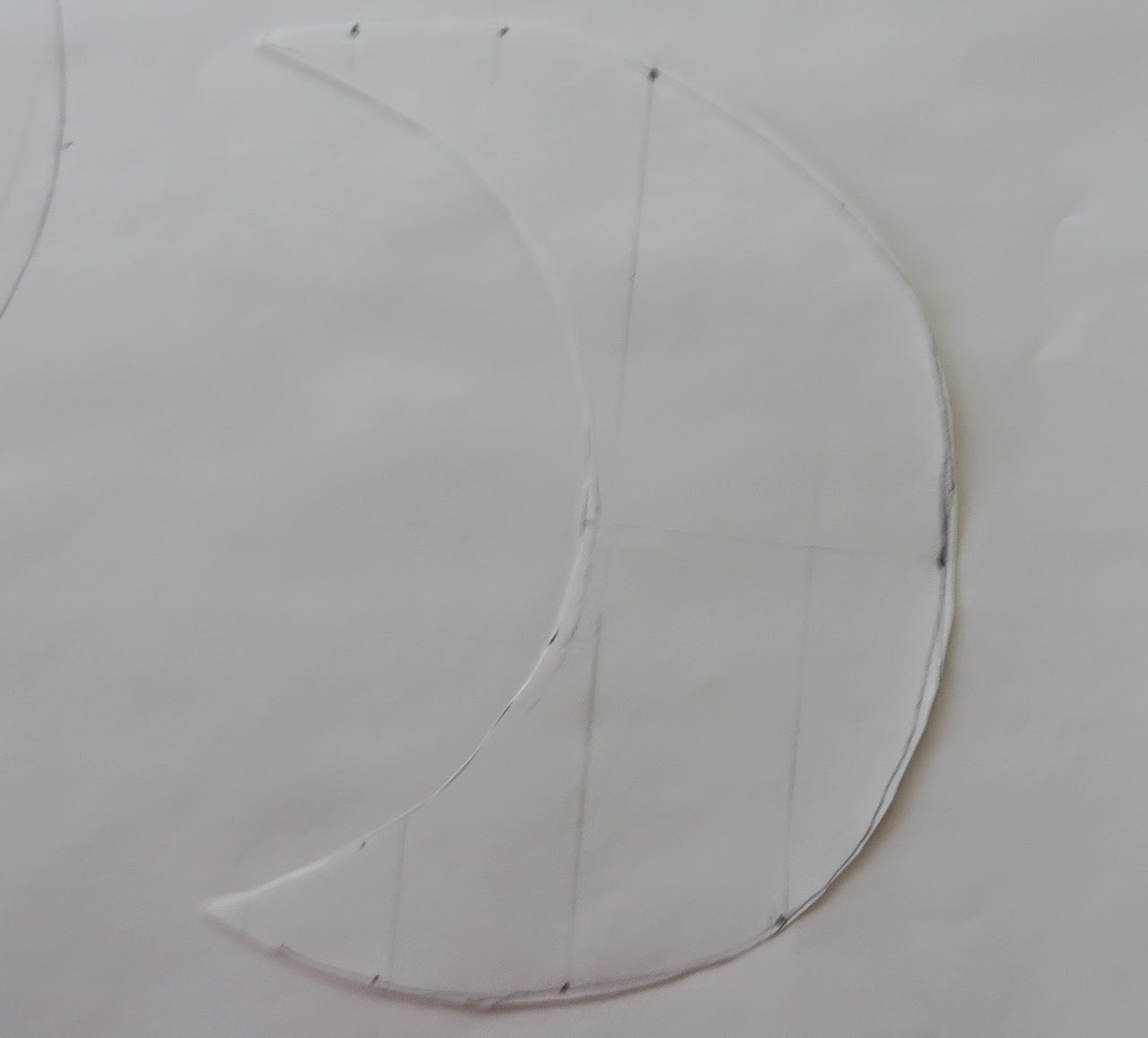 It was folded in half and the shape evened out so that both ends matched. 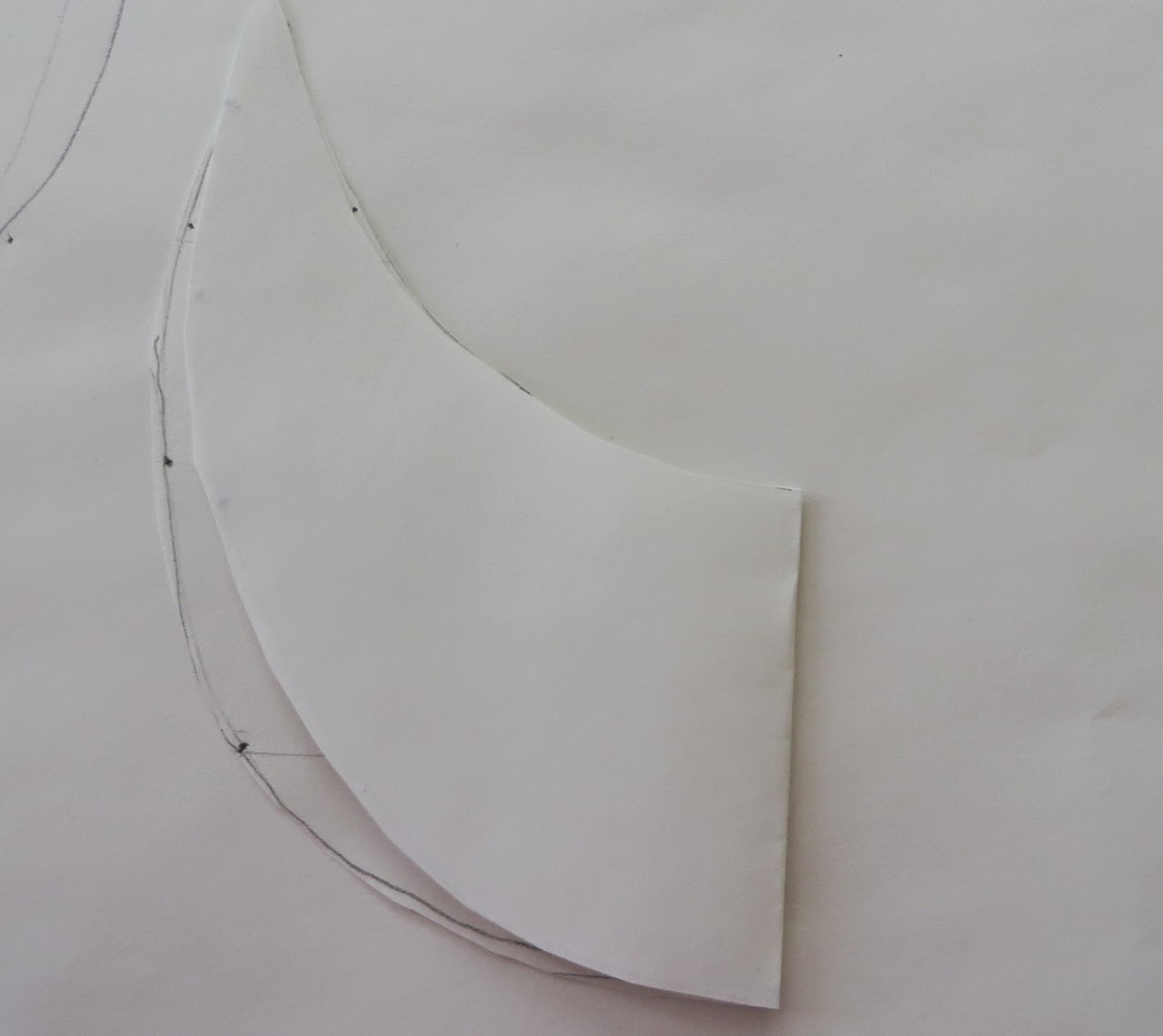 Next, using the cut-out as a template, I draw around its edges on a fresh piece of paper. I added one inch all around to account for the depth -- the thickness -- of the resulting pad. 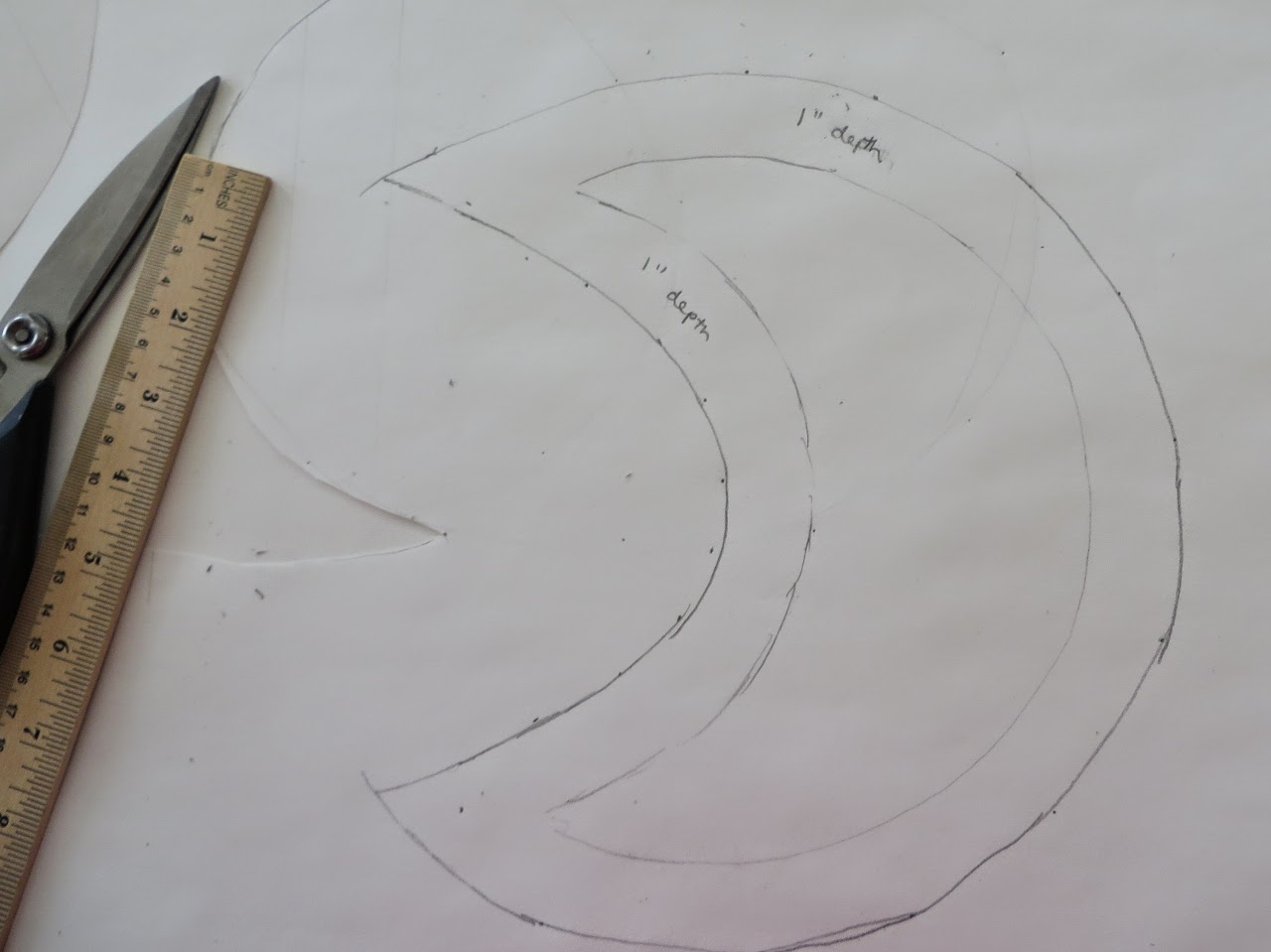 Then I added another one inch all around for a seam allowance. The wide seam allowance gave me lots of room to tweak the shape and thickness of the pads if needed. 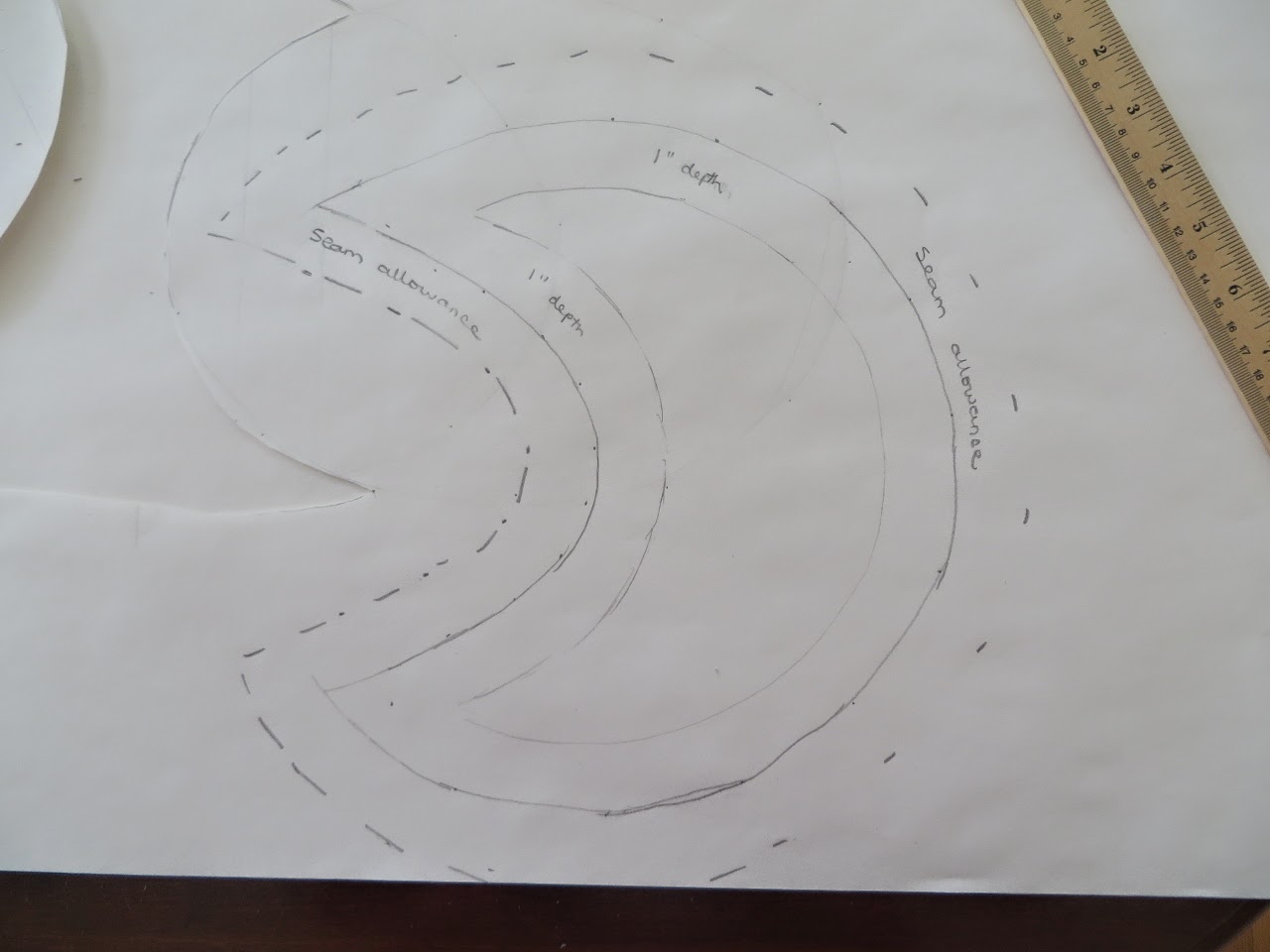 There, the pattern was finished.

The rest is pretty straightforward. Following the pattern, four pieces were cut out of the pink linen. 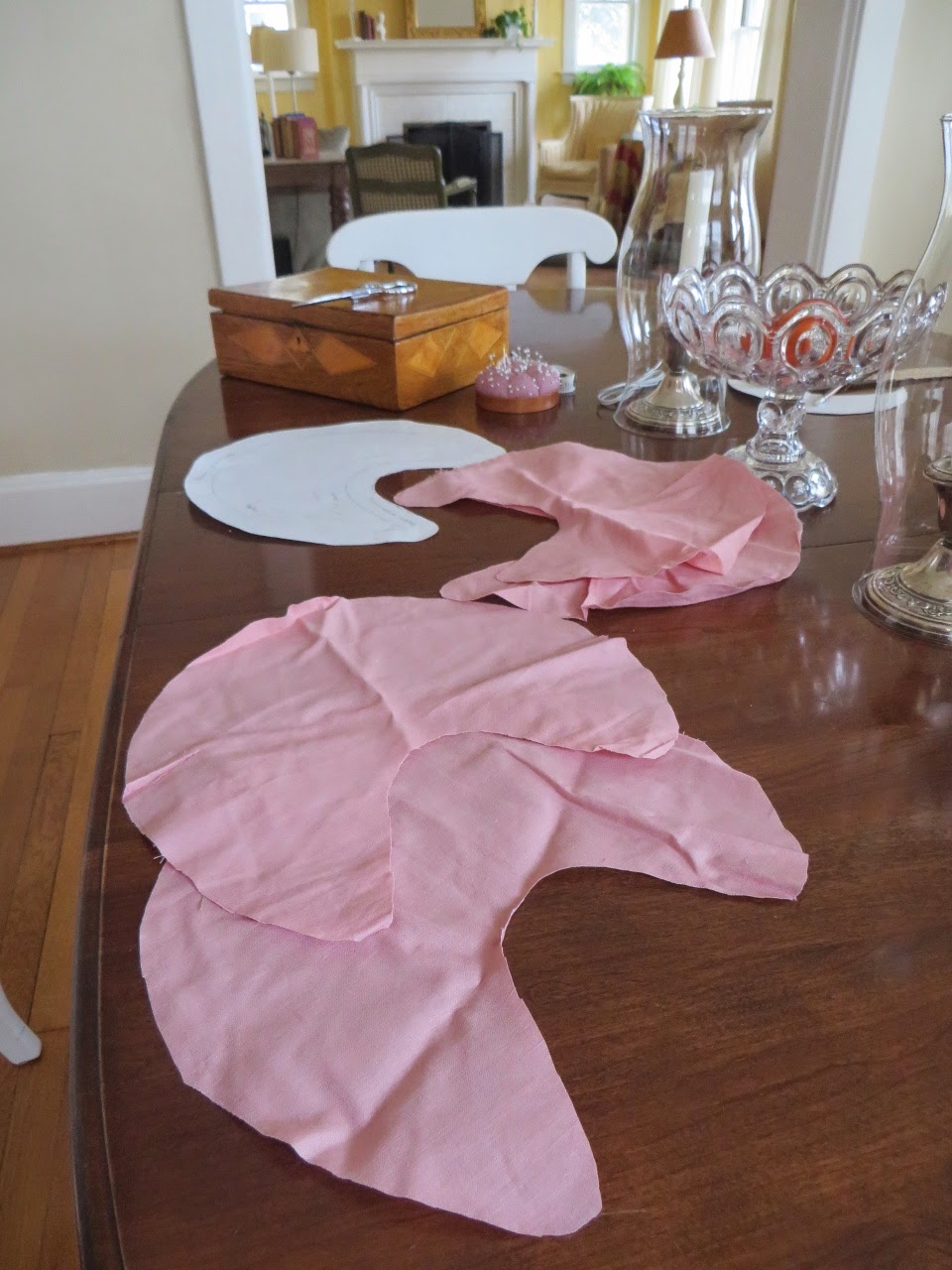 I sewed up each pad with linen thread, leaving a little hole in each for turning them right side out and stuffing them. The boys' toy car is in the photo for kicks and giggles. 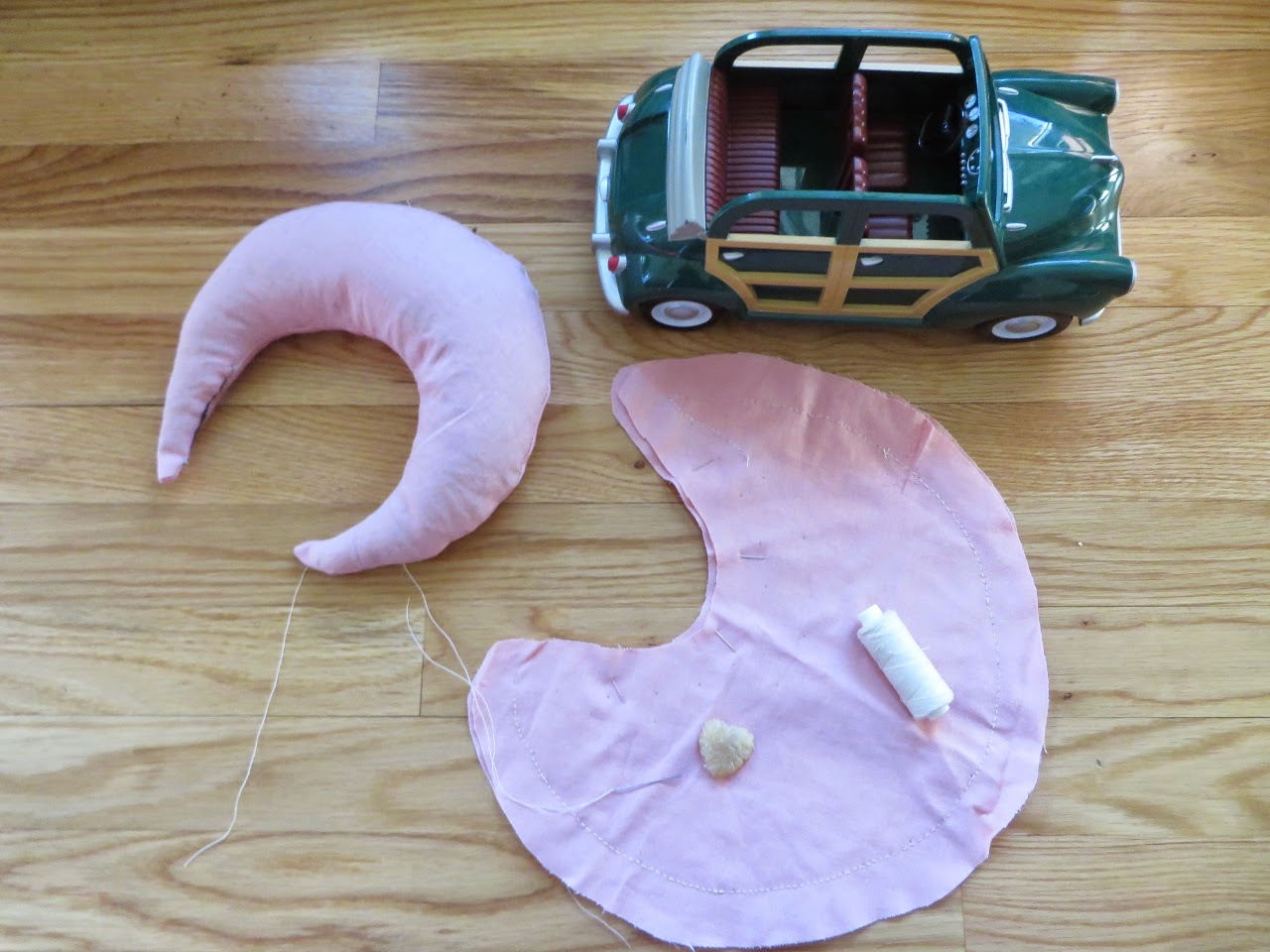 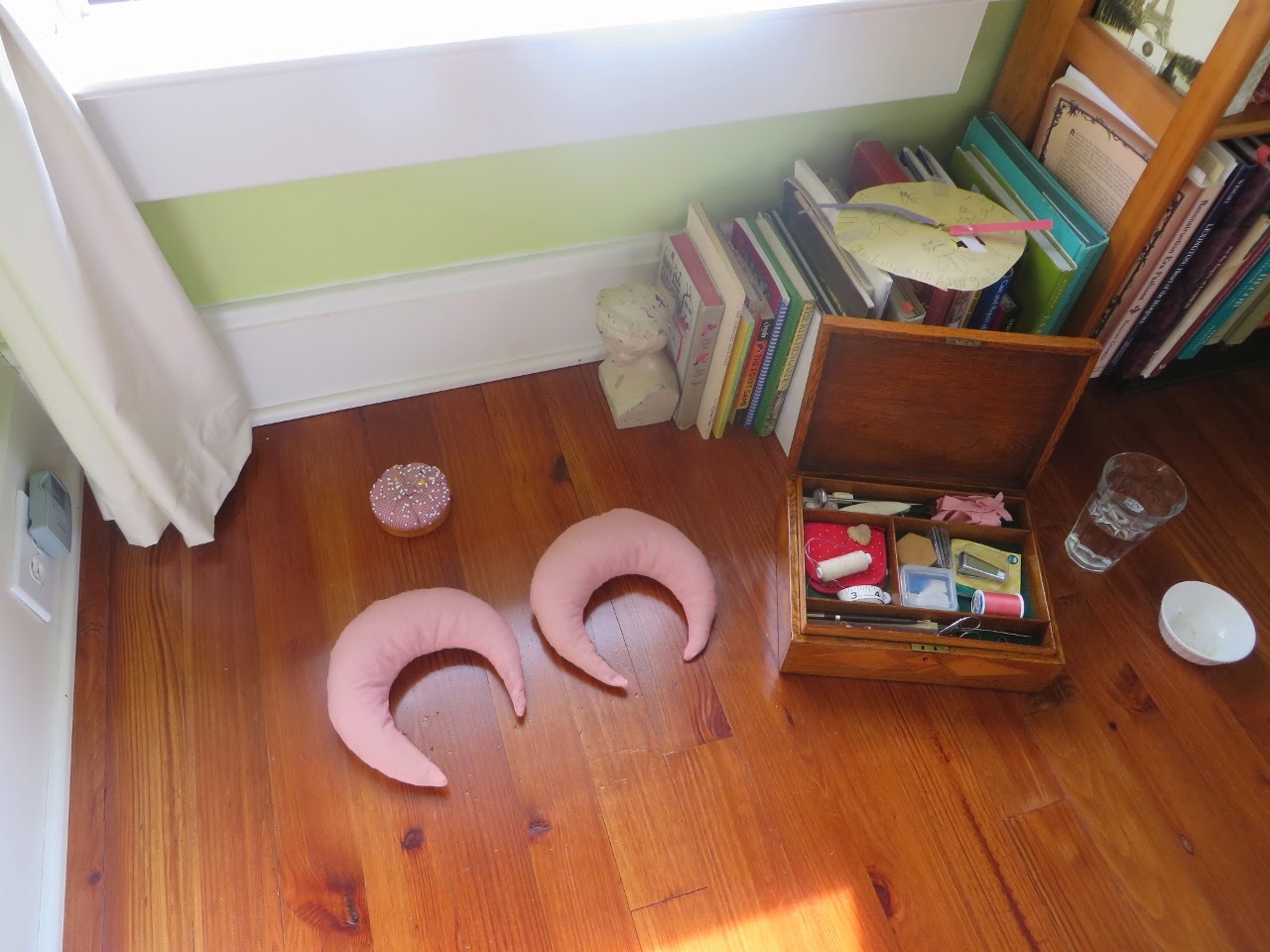 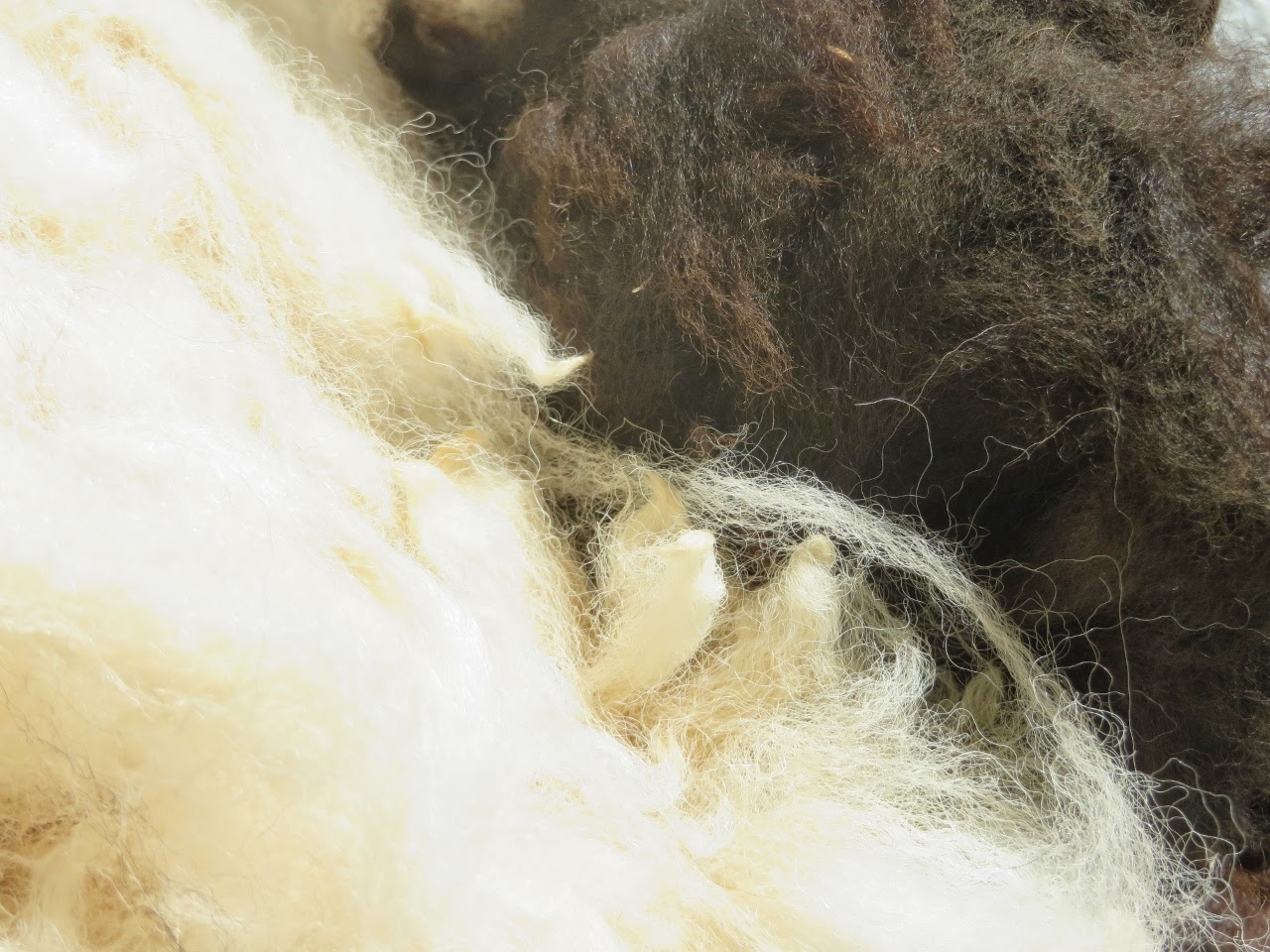 The pads are stuffed with alpaca, which is all I have at the moment. The stuffing is not crammed in, so that at some point the alpaca can be spun...the stuffing would then become down from one of our very old, ready-to-be-retired pillows.
The Final Pads

Here they are, pinned to the stays: 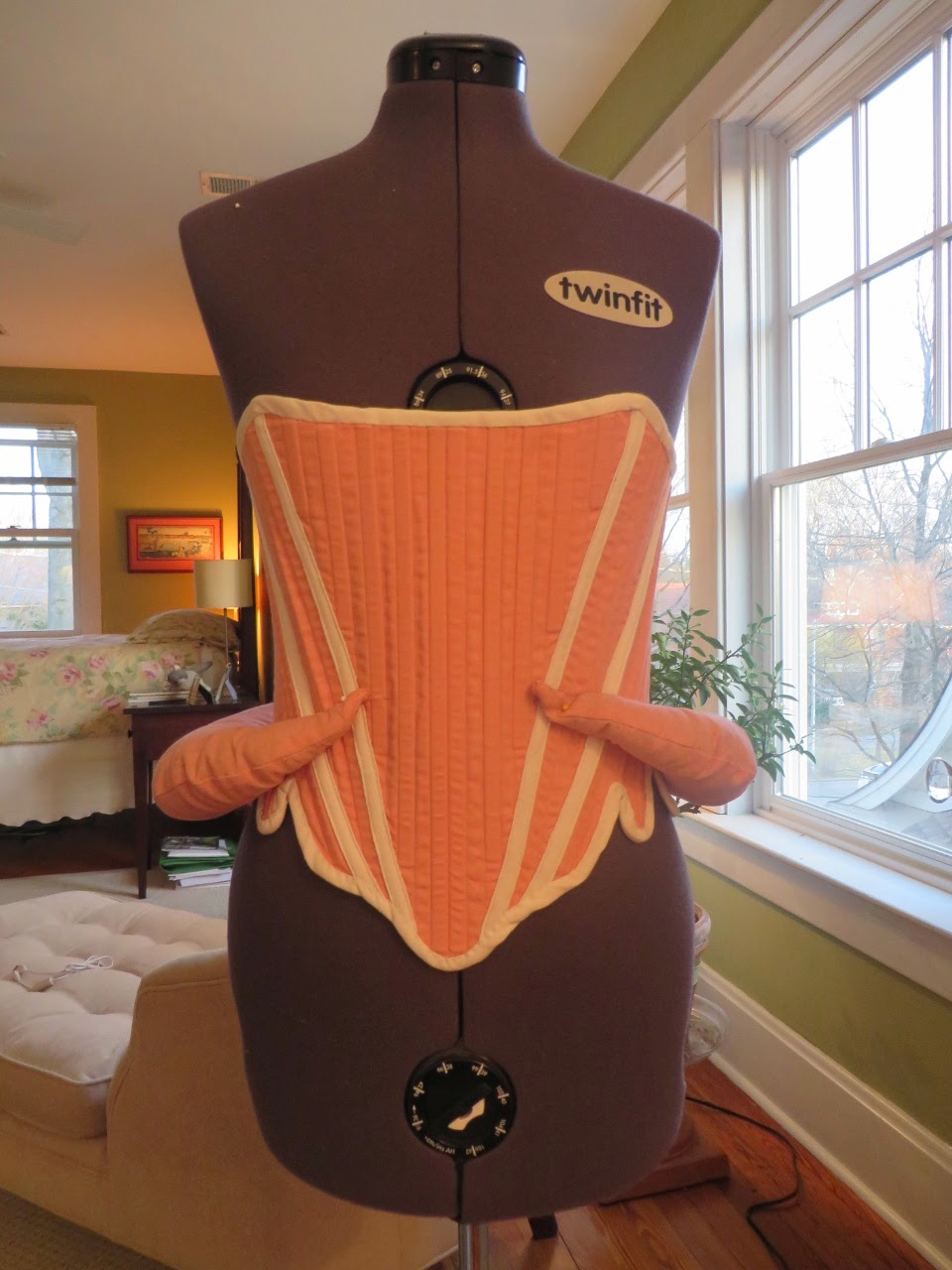 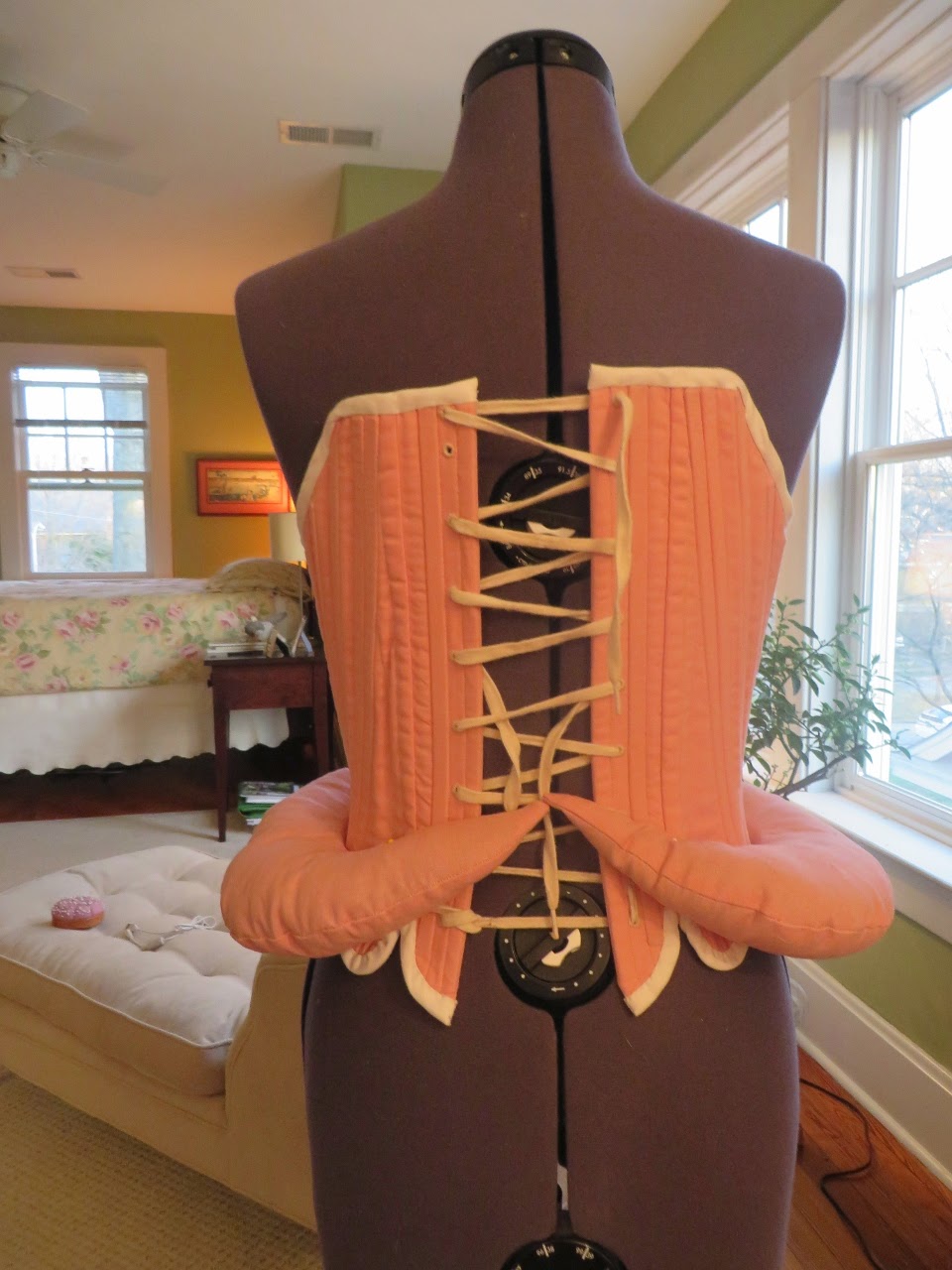 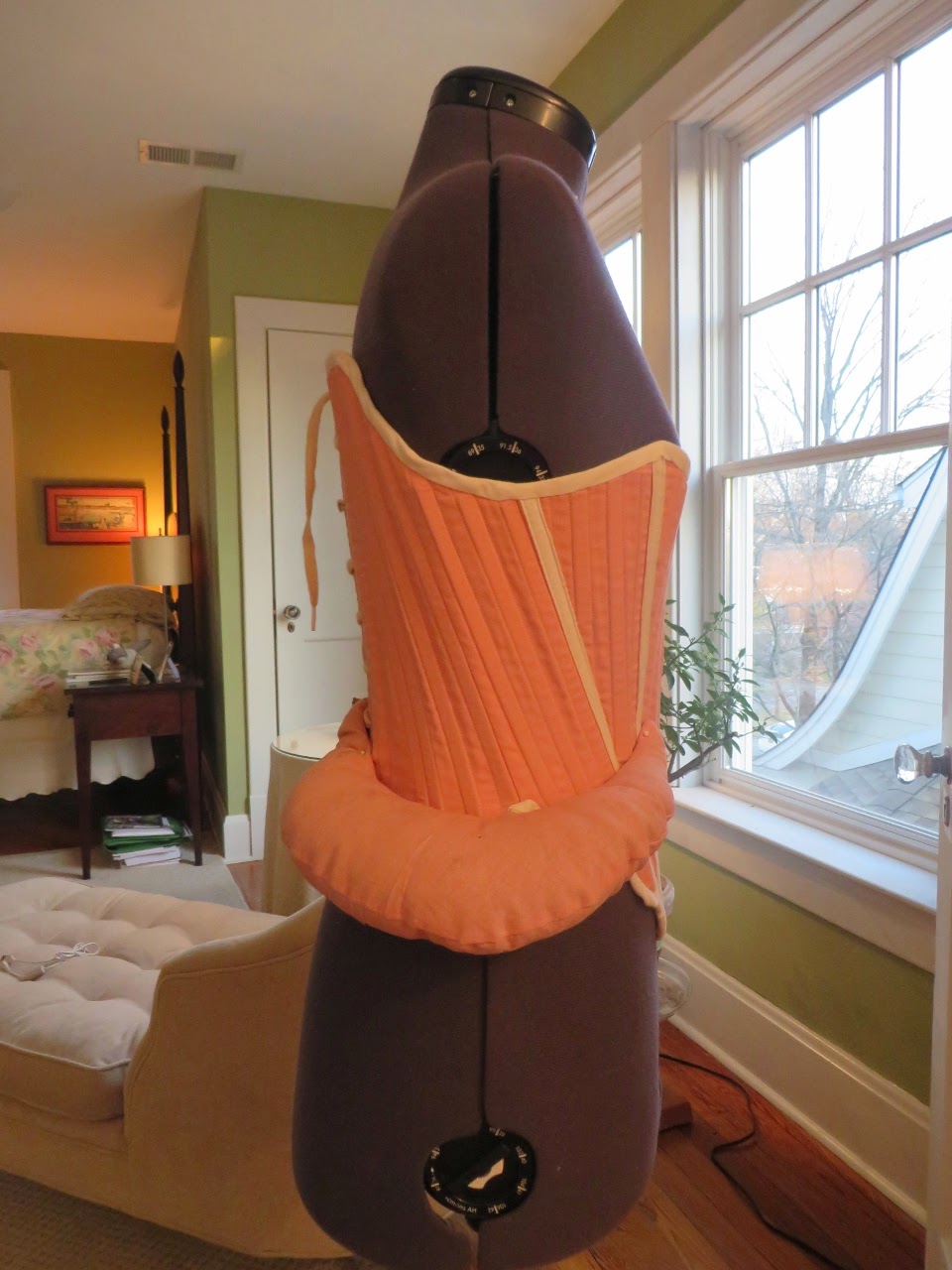 A rather fun little project. Straightforward and unfussy.

Next, a plain, narrow decency petticoat to wear just above the stays.  Before I leave you, a little boy and kitty silliness. Christopher rests his head on Muffin, all soft and warm, and reads as she  naps. Bliss for both. 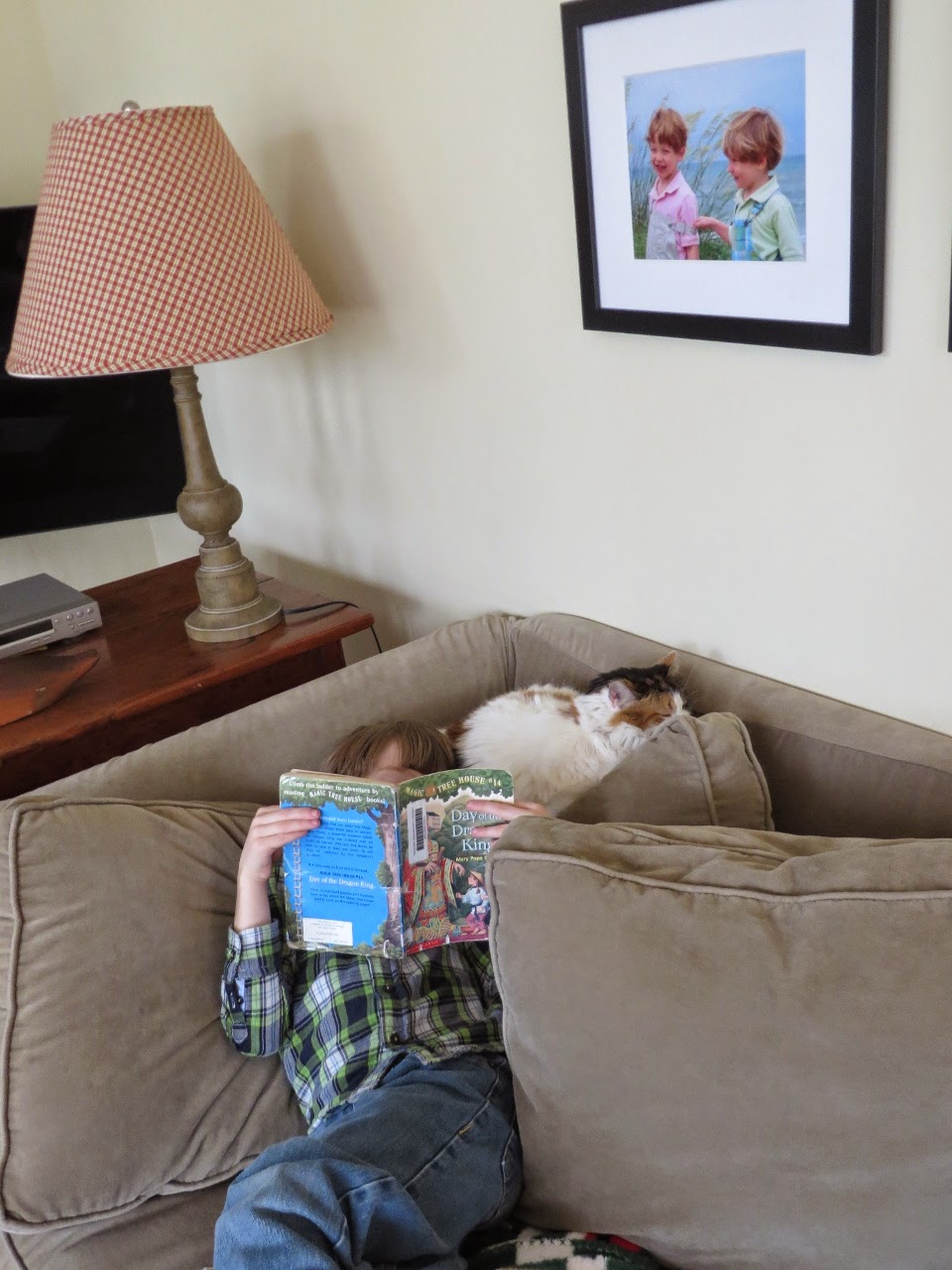