Early Spring Means Sheep Shearing...Or, How Lana and the Flock Took To Their Heels

Yesterday was shearing day number one at Laura's Square Peg Farm and so the boys and I headed out to help. Leeloo was still on the shearing stand, and the boys packed her shorn wool into bags,and wandered happily around the farm after being asked to please exercise Izzie the Adorable. More on her later.

Lana, my Shetland, was waiting in a fenced-off portion of a pen in the barn, where she and Lily stood gazing at us, as sheep will. Lily appeared patient, as she is a sweet and patient sort. Lana was guardedly quiet. You could tell she felt that Something was going to Happen. Then she figured out that she was to be haltered and that was it. She did Not want to be caught; she's not socialized, so she might be considered almost feral.

As soon as Laura's father entered the pen, she morphed between high-flying ping-pong furball with skinny brown legs to a cocoa streak of lanolin greased lightning in the confined space until Mr. Bullins wrangled her with main strength into her halter. At which point she sat down, wouldn't budge, and had to be carried to the shearing stand. In the mayhem a temporary fence fell, the other pen of waiting sheep saw their chance and within five seconds were out of the barn and skipping around in the back yard. Huzzah, freedom!

Noah and Christopher were playing with Izzie, when all six pounds of her Chihuahua mix spied sheep, loose. Fun! Time to be a big dog. The flock was now grazing in the back yard, so Noah, who had Izzie on a leash, allowed her to approach, but not too close, and she wiggled and barked and jumped and looked big as she could, and the sheep, disgusted, trotted back to the safety and quiet of the barn. They're not afraid of her, but they don't like being yelled at :}

She was one happy dog, and Noah, the shepherd, was one proud boy. Sheep at his bidding, you know. 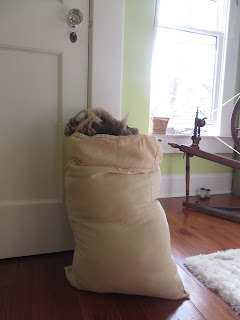 Shearing took a while. If Laura hadn't had the unenviable bum area, and her mother one side while I had the other, it would have taken hours. As it was, I left a good deal of fleece on Lana in trying not to get near her skin, so she looks perhaps a little lopsided. Laura says in a few weeks you won't be able to tell. Good.

After shearing, I felt Lana's side, just to see. Her tummy gurgled...those multiple stomachs were doing their thing, thankfully...but then suddenly there was a tiny, sharp movement inside. A kick!  I am a mama and I know a baby kick when I feel one. Laura's mother tested and the baby kicked for her, too. Alas, no kick for Laura, but she's expecting and that's old hat for right now:)

After giving Lana her oral medicine and shot, not appreciated by the sheep at all, and trimming her hooves, which she might have been happy about later, and at which I was a tiny bit better, we let her race away to her mama, crafty Etta, and buddy outside and went to wash up and hang out on the screen porch with a glass of very enjoyable, timely wine and some manchego and boucheron...on saltines. Actually, excellent cheese on saltines is quite good. It was warm out, the air caressing and teasing, and sprinkling under damp clouds, and the view was marvelous, daffodils and trees and meadow and sheep and barn, and the boys relaxed with us, and life was about as lovely as it gets.

We came home so happy, and singing

I have a pillowcase stuffed with Lana's gorgeous chocolate fleece with blond tips.

Noah says he wishes every day could be like that day. Christopher just grins.

I look at my pillowcase and dream of washing it, carding it, and spinning it, to accumulate until Lana has given enough wool to weave into two moorit Lana blankets, one for each boy.

Thank you Laura, for another memorable day. Thank you, Lana, for being your wild sun-washed brunette self.

Where is Vernet, you ask? I have a post waiting, but have had to stop embroidering for a bit. Since I stopped, I've had not a single headache, not one migraine. Could eye strain along with work stress be the causes of so much unbelievable pain these last 4-5 years? We may have a hiatus on sewing, then, to test the theory.
Posted by ZipZip at 7:35 PM 4 comments: