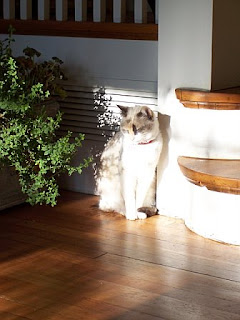 Our Zip Zip. Oh how we miss her. Our Purrpaw; little Foursquare - her squares of calico color decorating the back of her neck in quadrants; Purrball; Kitty Zip; Kitty in a Catsuit; Wibble; Whipple; Kittens Plural (applied to one cat: go figure); Sweet Purr, Zhip-Zhip. Endless affectionate names to call our sweet best companion for 15 years. Her mother, Inkspot, of whom Zip was probably the last living of her five kittens, is so blue without her kitten-soft, thick-furred, blue-eyed, dilute calico daughter. She asks to go outside and then sleeps endlessly in her rocking chair on the front porch, and we find it as hard to console her as we find it to console ourselves.

Zip Zip, my husband, and I shared our lives' most important moments to date. Zip's fascination with strings and sewing notions, her waiting at the base of trees, nose upraised, ears perked, tail quivering, while squirrels danced, heads down, and chattering, teasing her just feet above. She wouldn't hunt, but loved to watch, and the squirrel population grazed nearby restful and unmolested. Zip, her tail like a flag, galloping ecstatically to Curte in the backyard, to roll over in the grass and rub her back in it, purring, while he talked to her, Zhiiiip, Zhipppp, you silly. Her bout with bone cancer, which took her left foreleg; I stayed and slept with her in the guest room until she recovered enough to manage the rest of the house. Through rounds of kitty dialysis and special food, from which she'd rebound with energy and purring largely intact. 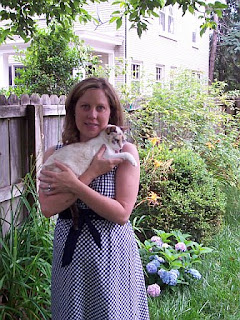 She helped us through my bout with severe chronic illness, through graduate school, multiple moves, meeting my future husband and thinking he was a good guy worthy of napping in his lap, marriage, two house renovations and endless furniture rearragements, both of which she disliked as a unwanted change in a happy routine. Though our marriage, and move to my husband's hometown: the drive up I-75 left her meowing faintly and continuously in my arms while I tried to steer, while her mother foamed at the mouth, all of us panting because we had the heat on in the Saturn to help the overheating car survive a traffic jam. Through my pregnancy and the arrival of the two boys.

She fell at age 15 years to the effects of chronic kidney disease and the stress of getting around without her left foreleg, lost to bone cancer two years ago. The arrival of the boys didn't help: she felt confused and we were all stressed trying to pay loving attention to all of each other, and none getting enough.
Posted by ZipZip at 7:45 PM 1 comment:

Not Much Sewing for Awhile: The Twins Have Taken Over! 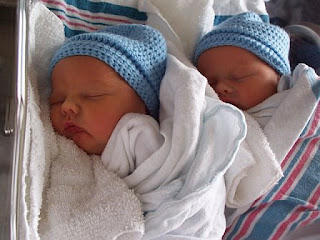 My goodness, is time a different entity now! Since the arrival of our twin boys on May 31, time has become both more blurred and less elastic. We live by their stomach clocks: every three hours the boys open their bow-shaped mouths like tiny birds for their next bottle of milk. We grab sleep, wake, run errands, wash them, love and hug and kiss them, during the intervening hours, whose minutes flee so quickly.

At left, our twins at three days old.

So quickly and through the fog of sleep deprivation, so that it's already difficult to remember that their fingers measured less than the length of my pinky fingernail just four weeks ago, that they slept through their feedings, that we hardly knew what color their eyes were, that we were elated and I was in pain from the sequelae to the c-section for weeks, that to compound the change we lost our beloved companion Zip Zip, for whom this blog is named, and spent days worrying about her decline, days crying mourning our loss, until now it's a soft ache that I doubt, like all good loves, will ever fully fade away.

Now we each of us have had some measure of sleep, Mom, my husband, and I, and the boys are growing and growing, and the smaller twin, at six pounds, and plucky as he was in the NICU, is first to look around him with interest, first to examine patterns of black and white. Born at 35 weeks, 4 lbs. and 15 oz., he didn't need but a little forced air for a short time, and the warmth of the heated beds, and by his second day my husband was feeding him with a bottle and he was drinking in the same methodical way that he maintains now. He was Baby B, the baby to the right, before birth, and he didn't move and wiggle as much as his brother, so we named him Noah, which means restful and peaceful. 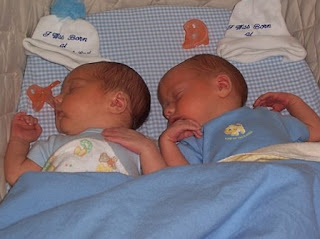 His brother is more volatile: he gulps his milk and then has a hard time burping; he eats too fast unless you set him up for a slow, quiet meal, and then is gassy and miserable and worries his parents and grandmother. He's bigger, too, and was at birth too, but, we understand from the NICU that the bigger twin often has a harder time. He needed forced oxygen and a feeding tube, and his heated bed, although at day 3 he graduated to our room and to the regular nursery so that we could care for he and his brother. He's still a little slower to develop; his huge eyes watch you with warm, vital interest, and his looks are loving, I fancy, and he loves, loves, loves to be held, but his face has yet to light up to that almost smile that Noah is already gracing us with. He fusses and fumes, and his soundtrack of peeps and gassy groans is practically continuous, even in sleep.

Above, the twins on June 17th.

So these are our boys and for awhile sewing and vintage machines, like other hobbies, move to the background, remembered fondly but with detachment and engaged in at odd moments, and right now, truth be known, not at all.
Posted by ZipZip at 7:15 PM No comments: