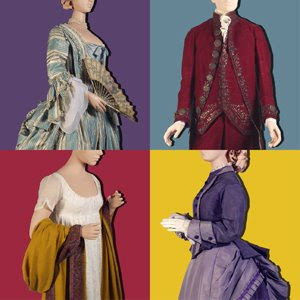 Fashions come in living color, usually...except when black is popular, which, once again, it is this year. Further, color in our clothes has been full of symbolic meaning probably since time began. Think of Madame X and her black clinging gown on pale skin, or how gauche it used to be to wear white after Labor Day, or why bright red on your tie or skirt evokes Valentine's Day or passion.

Popular colors have also been tied to scientific discovery...when aniline dyes appeared in the 1850s, people went nuts for shocking bright colors, which was shocking, shocking! to some eyes used to the gentle tones of dyes made from vegetable sources.

The Kent State University Museum, Anne Bissonnette, curator, put in an exhibit between 2004 and 2006 that explored color in clothing, and lucky for us, they put much of the exhibit and its commentary online, and have kept it there.

Do have a look at The Right Chemistry: Colors in Fashion 1704-1918. The exhibit takes you through specific colors in turn, such as purple and mauve, and then shows you garments in those colors with some details about them.

Want to read a few nineteenth century views on color in dress?

The Twins at the Farm! 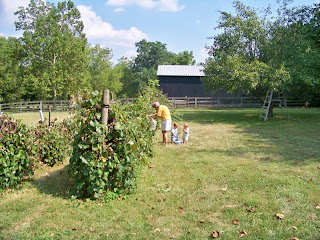 It was the last week in August, a puffy-cloud afternoon, out at Mamaw and Papaw's. Once out in back, the boys trotted with us down to the Concord grapes, which are so sweet and so heavy on the vine this year. They rather liked the taste, but preferred the apples nearby.

That tree has borne so many this year that the branches leaned way down towards the ground. They were mostly picked already but Christopher settled down in the shade with a windfall for a long while, while Noah "helped" Mamaw and I gather up other fallen apples, the sound ones, for us to take home. I had several hours of peeling and cooking them into applesauce during the next days... 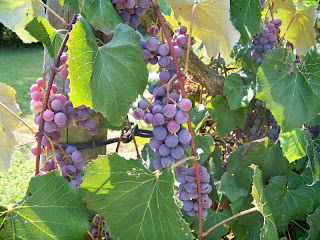 After awhile we thought we'd inspect the garden, and Noah patted his first pumpkin; it was fat and round! Then, as we wandered around, we heard Papaw come home so it was back towards the house as fast as excited little boys' feet could go.

And finally, those dirty little feet needed a wash, and so they played under the pump awhile.

It was a dreamy afternoon, the kind you remember for years. 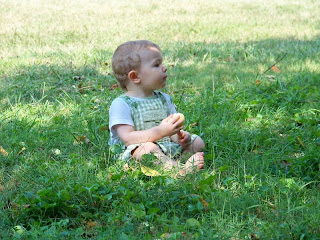 Photo: Christopher and his windfall apple. 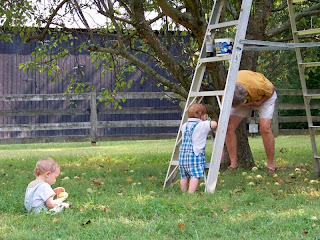 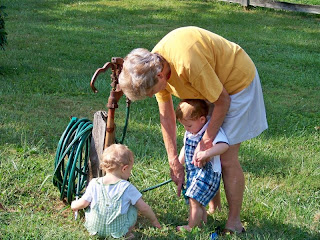