We know from last time that the Vernet 1.0 dress is a work in progress... However, 1.5 years into it, I have yet to write up how the first edition was actually constructed. At first, it seemed possible to pile everything into one post, but as I went through the notes compiled during 2015, it was soon clear that I'd have to break things up into background and evidence, and actual construction.

Time and Blogging and Less Time and Less Blogging

In years past, when a project would really take my fancy, I spent months researching and collecting whatever evidence I could manage to obtain from sources online - magazines, novels, fashion plates, an occasional manuscript, photos and documentation of extant garments. Then I'd muse all about it online, like so many of us do, as with the silly number of posts I made about the 1790s sleeveless spencer.

For a while, I was able to turn to actual garments from my own collection, as with the 1870 Bustle Dress. Despite Ohio's several excellent museum collections being just a few hours away, I've never had the freedom to visit them. My own stuff, obviously just study specimens and nothing special, was great fun to work with, but is now largely dispersed, gone to Cassidy of A Most Beguiling Accomplishment. If you read some of my earlier posts, you'll see the efforts of someone with more interest than proper background, and so it made sense to give things to someone with both the training and the equipment to care for them properly and make better use of what they have to tell.

In most cases, whatever research I did I wrote about nearly immediately, posting as the information came to light. It's frustrating that the Vernet project came along when it did, just when the life of our household, and my own life, was full of change.

Within the space of just a few years, my part-time job in public health, which I love, became more taxing than it used to be, the twins grew up enough to start piano, and YMCA soccer, and homework, and to dip into other fun that we could enjoy together -- fossiling -- a tee-niney garden, vacation Bible school. Chronic illness of one sort or another blossomed. It's common, you know: one chronic illness begets another; our bodily systems are all interrelated. I have a transplant, and the effects of long-term medications and transplant-related fatigue made it easier for other problems to arise: migraines, diverticulitis (now those episodes were fun, dangerous, and expensive), and now the formally diagnosed type of dyspepsia that makes eating a pain. Now I understand what novels mean when they describe a crabby person as having a dyspeptic personality. Try me when I am cooking dinner for my family, a dinner that I cannot eat, and you'll have a nice sample of it.

Then, you can't forget age. I don't mind it, aging. While crepey skin on my hands is creepy in one way, it's something that ties me to the many beloved people who have gone before me, and the years of living and suffering and just dealing with what comes have made me love what I have the gift of having right now the more, and make me more ready to share it, because really, what is a gift when it's kept to onesself? There's no point in that, as my own faith and that of others will readily tell you.

Meanwhile, ever after the roots of things that make up garments, I went after threads, and discovered spinning, and then fibers, then wool, and then -- SHEEP.  Oh dear, if ever there was competition for costuming, it's the fibers that make the fabric, and the animals that make the fibers.

The result? The inevitable sequela? I don't have much time to begin with, less energy to get on with, and I am splitting it umpteen ways -- job, children, husband, stupid illnesses, sheep and the world of making textiles, and costuming.

It's no wonder Vernet is taking forever.

So, if the following is less well researched than some projects, with less breadth of resources and iffy citation quality, well, you can see why. I won't give up, but, gee, it's after bedtime and I need to check on the new kitten, and tomorrow I visit Lana the Shetland and Nina her lamb, and then it's soccer...

So, how did I set up construction? What evidence did I use? Here is the thought process.

Let's start with the dress fabric or fabrics. We don't know for sure what fabrics were used. It could be cotton, and arguably might be. In Journal des Dames, just about all of 1814 is dominated by percale white dresses for promenade and morning. A few mousseline (a nice clear muslin) dresses appear -- they are sheer -- as well. The Napoleon and the Empire of Fashion exhibit’s Annette model wears a dress of percale and clear muslin that has several similarities. Although Vernet departs from norms in proportion and in accessories, he appeared to follow the mode in that he showcased so many percale dresses. 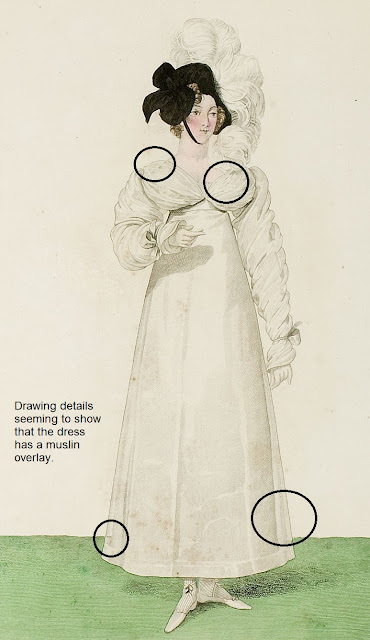 A previous thought of mine was that the styling with the large bust poufs is usually seen in full dress, especially in ball gowns. Christina Barreto Lancaster's Hillwood Manor exhibition model (shown further down in this post) is an example.

If our Vernet plate were a more formal dress, a crisp silk would hold the poufs nicely and the skirt body would hold well, too. Perhaps the silk was what has been known since as a silk ninon, although I was unable to track that fabric back to 1814. If it were, Vernet may have been playing with words, associating the fabric with Ninon l’Enclos.

Looking at the dress plate, and how strongly Vernet indicated the join between the bodice and the skirt, it's fairly clear that the overlay is not an entire dress set over a slip.  Instead, the bust poufs and the sleeves are mounted to the bodice.

We already know what I imagined about the embroidery, based on when the dress came out, at the end of Napoleon's dominance over France.

Here's another 1814 dress, just about covered in the embroidery with cutwork; the idea was quite popular, it would appear.

It could also have been something else. At one point I thought the little indication of decor could have been  a bit of gathered ruching, as in Portraits des Soeurs, 1814, by Jacques-Augustin Pajou, from the Louvre.

Or it may simply be the pulling of the thin muslin on the drawstring, as in this dress from the Met.

Yes, It IS possible to have a drawstring on a straight neckline. Here is Cecile from Natalie Garbett’s blog. The strings could be anchored at the straps.

Another dress, from Augusta Auctions, this one in a plain muslin embroidered at hem.

This sort of neckline just isn't very exciting, and Vernet enjoyed trendsetting fashions, as we know from his other plates. I went with the idea of embroidery. After all, I had evidence that decorated underpanels or underdresses were fashionable. Here are two from Natalie Garbett’s blog, in her post describing her first dress of 2012.

Note that in all the dresses shown so far, the shoulder straps are set very far to the edge of the shoulders. This is the norm for the entire year in both lower-necked dresses and high-neck dresses. I made sure that this would be a feature of the Vernet dress.

Their construction? We can see the bodice through the bust poufs just to the right side of neckline. This argues for flat panel to shoulders, which are set very far out, and very narrow straps on the underdress. They could be constructed two ways:

I threw out the latter idea as less likely.

The bust poufs, I thought, might be made most easily with one piece of fabric. Not being privy to the construction of any dresses with bust poufs, I made a guess. I would use a single piece of fabric, either rectangular or shaped like an horizontal oval pointed at the two sides, accordion-pleated and divided by very thin thread band at center. Wider bands dividing the poufs appear on ball dresses of the period (see Christina Barreto-Lancaster's Hillwood Manor exhibition example below). The outer edge of the poufs would be turned under and tacked down to the strap lining, then covered by the sleeve fabric and the strap fashion fabric. 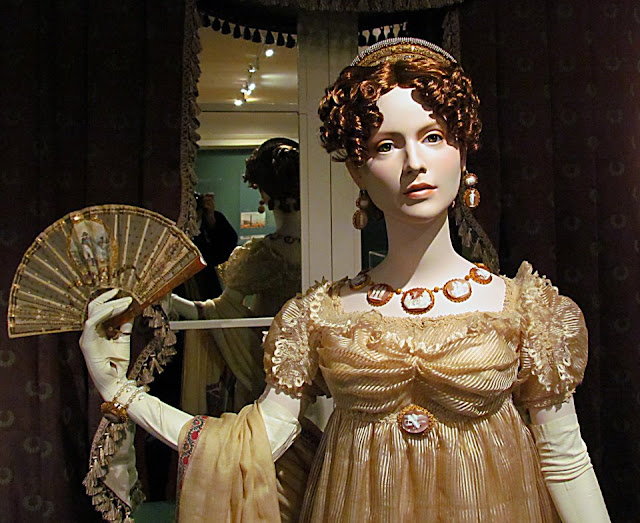 Here are far more tailored versions of the bust poufs (the same exhibition). 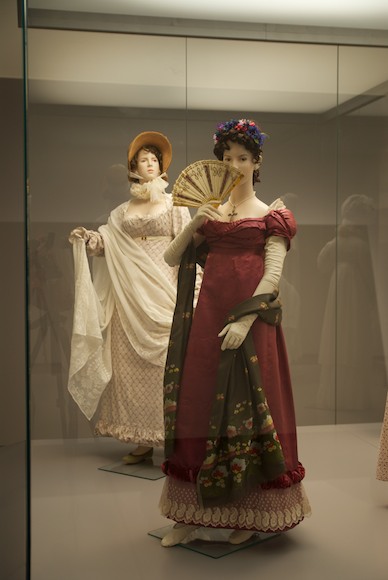 From earlier, a rudimentary bust decoration that later would become puffier.

Our Ninon wears her sleeves quite full, the diameter gently tapering to the fashionable elongated wrists.

The sleeves are worn twisted, with the twist held in place at the wrist by what appear from the paintwork to be substantial satin or taffeta ribbon, very wide, but folded so that the band around the  wrist itself is not wide, but narrow. Only the bow is wide. La Belle Assemblee in 1814 notes that white satin ribbons are popular in Paris. (Oh, for Pete's sake: where did my citation for that go? This is what happens when you write up your notes so long after the fact.)

Annette, in the Napoleon and the Empire of Fashion exhibit, wears a more tailored version of the very long sleeve. 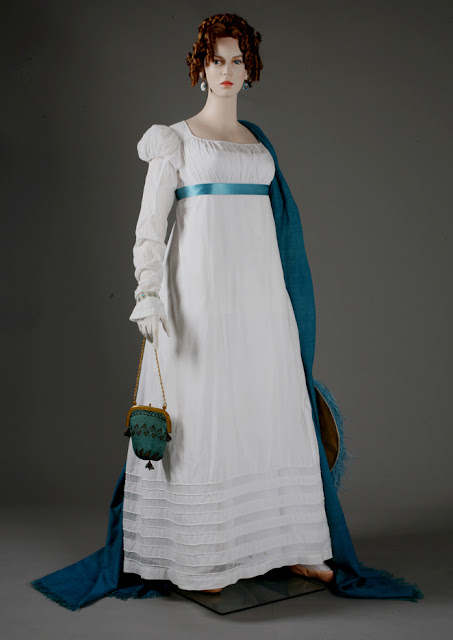 Another model from the same exhibit displayed more exuberant sleeves: 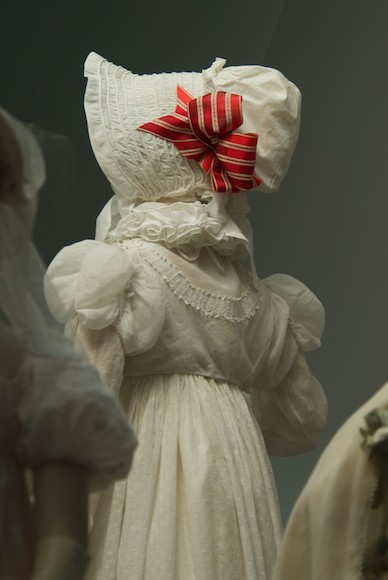 Dress Waistline and Back

In our fashion plate, the bodice waistline is plain: there is no narrow belt piece between bodice and skirt. The stress, then, would be taken by a lining, I would think. It is possible for unlined dresses to have a plain join too, though: witness Cecile on Natalie Garbett’s blog post about underpinnings in Napoleon exhibition. 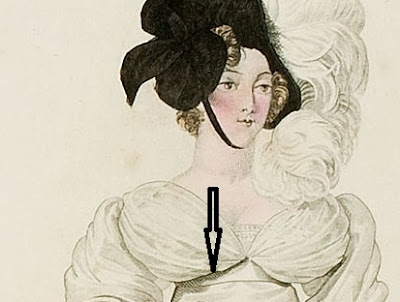 As so common with Regency dresses, and with earlier petticoats, too, the skirt's upper raw edge could be simply turned to the inside and the skirt whipped to the bodice.

At this period it was common for dresses to be back-closing, with two wide back panels hung on drawstrings that simply tied at the center, allowing for changes in fit. I went with the popular mode.

There is really not really much to remark upon here, except that the dress dress ends two inches or so above the anklebone. Rather a trendy length. Note too the rather significant hem on the overdress. I've marked it in the plate. The double layer would help the hem round out nicely, and almost forms a decorative touch, in that the doubled fabric will create a shadow effect. 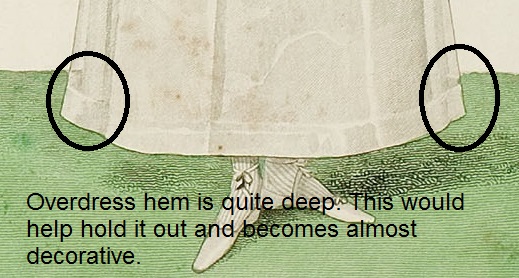 That's that. Next time, and really, I do mean it - construction. I figured out the construction and wrote it all out before making the dress. It was a good plan to do so, and it worked, even if I did spoil things by wearing bad stays. The roots of the dress are still good.
Posted by ZipZip at 10:01 PM 3 comments: