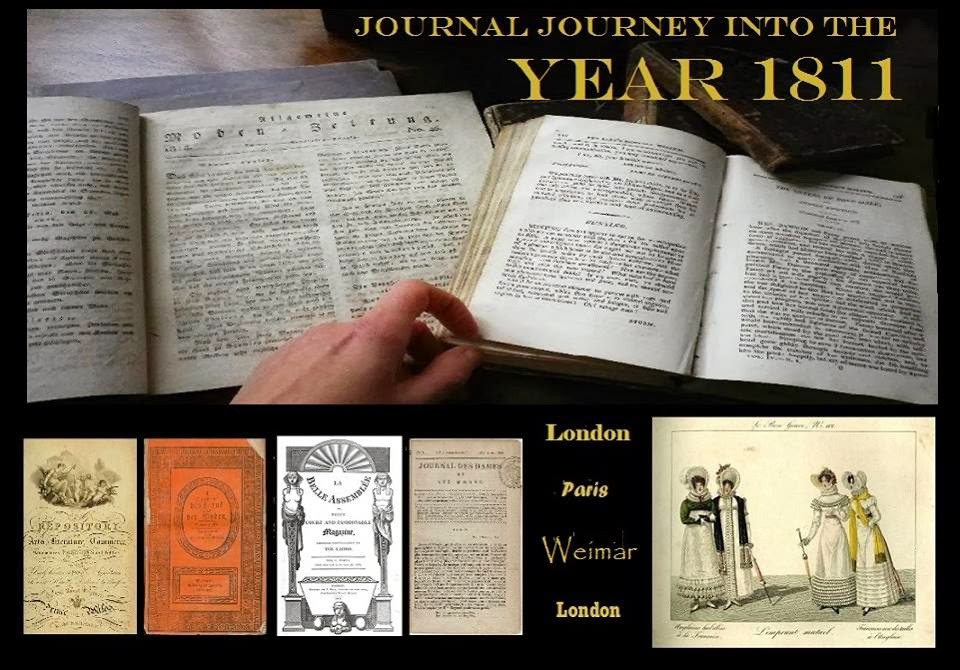 The August issue of La Belle Assemblée is here! This month please pretend that you've missed the July issue and are reading the new August number, flip to the fashion plate, and, excited with what you've seen, run to show the issue to your sisters. You three pass it around, examining and critiquing details, but then someone mentions another topic, and the magazine is forgotten until later. Today we'll look at the plate, and next time I'll present the rest of the text. Later we'll back up to July.

Now, as I always write, please don't forget to read the London report from Ackerman's, and those from Weimar and Paris.


The August issue contains just two pages of fashion news (p. 101-102), and only one plate, despite the title reading "prints" in the plural.

FASHIONS FOR September, 1811.
EXPLANATION OF THE PRINTS OF FASHION.

A large French bonnet, composed of fine India muslin ; the crown in the cone form, finished on the top with a bow of lace, trimmed round the face with a deep full frill of Mechlin lace, and lined throughout with a bright sea-green sarsnet. A short round dress of India jacconot muslin, cut round at the bosom, and ornamented round the bottom with a worked border, edged with small tucks. A short round French coat in green sarsnet, falling back from the shoulder, trimmed round the arm-holes with lace, confined at the waist with Margate braces. A beautiful long lace scarf cloak thrown over the shoulders, and caught up behind in a long loop of ribband, carefully suspended upon the right shoulder. Gloves of York tan. Shoes of white Morocco. Parasol of brown and green shot silk. 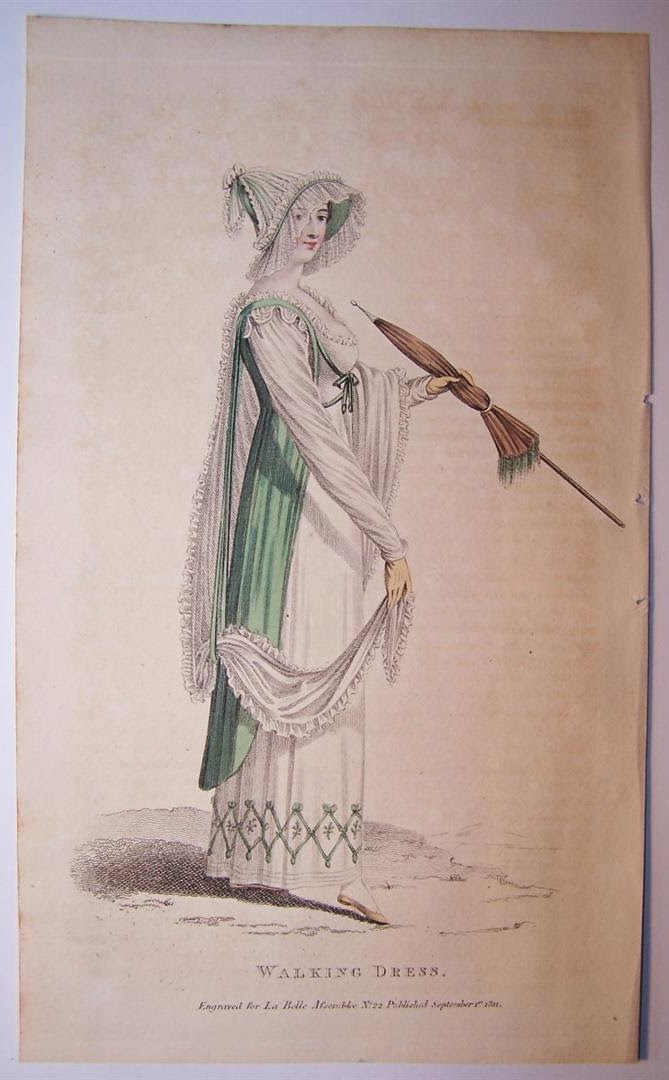 So, what do you think? I've been peering and squinting at the plate, and while I can make out that the scarf-cloak is lace, and that the dress is ornamented with embroidery, and the hat stands out only too well, the Margate braces just don't show up. The Eastern influence is apparent again in the pointy effects: the cone hat and the assertive diamond shapes on the dress border, a departure from the undulating floral embroideries so long in fashion. This would have been an expensive day dress. The lace is one key: real Flemish Mechlin lace was costly because it used fine threads and took longer to make than many other laces and dealers today put high prices on antique Mechlin as well. Wikipedia has a nice article about Mechlin.

Embroidery. Occasionally La Belle Assemblee made embroidery designs available. At the beginning of the 19th century they retain the attenuated lightness dominant through the last years of the previous century. Swags and airy vines and sprigs are common, and narrow borders. The exception is French imperial style, especially in goldwork, which feels positively encrusted, and heavy on the gold. As the years pass, the designs become fuller and rounder and more tightly composed.

Our own Maggie maintains a very good collection on Pinterest containing patterns from the first and second decades of the 19th century. Another Pinterest board titled "Regency Embroidery and Crafts" by Jeri Whitehorn Rtwr is useful too. A keen observer will see the differences between the offerings of different magazines. For instance, La Belle Assemblee was freuqently more conservative, while Ackermann's went for the really new stuff. The regency page on My Fanciful Muse, by EK Duncan, has a good collection too.

Margate braces. Apparently these were a trim you used to tie outerwear closed with, named for Margate, a seaside resort. Robert Louis Stevenson describes the an outfit in detail I think is meant to titillate, in his Weir of Hermiston, the chapter "Christina's Psalm-Book" although he could have lifted the description from a fashion magazine. In the plate all I can see is that the trim is rather thick and ties, since two ends hang down.

Okay, that's it for now.

I dare anyone to make that hat. In fact, I double-dog, no, triple-dog dare them. If you do, I promise to nibble, and swallow, a little bit of cotton gauze!
Posted by ZipZip at 11:14 AM

Labels: journal journey into the year 1811

so you would truly nibble and swallow a piece of cotton gauze? Hmmmmmm, maybe I should take an attempt on that cone hat then...joke!
But I think it's so unusual it would actually be fun to re-create it!
Oh and I found a better picture of that plate on the web - I think in the high-res it already looks much more pleasing...what do you think?!
http://media-cache-ak0.pinimg.com/originals/c9/cb/49/c9cb49c0fdf88884ac881374262eb81e.jpg