﻿ Over the last year or two I've been looking randomly, on and off, and not very hard, for a straight shoe last about the same size as my foot.

A few months ago I found one, hemmed and hawed for a few more months, and finally a few days ago took the few dollars and forked them over, fearing someone else would pick it up, fall in love with its gentle worn surface as I did, and purchase it.

Here it is, a straight last, hand-carved, in all its friendly, down-to-earth glory. Soft with the touch and grip of hands, roughened on the bottom with the prick of many nails, with interesting bevels from the work of the drawknife or whatever blades were used to carve it, that invite the holder to look at them and to think about the soul who created this handmade, entirely functional, and very human object. What about the soul or souls who used it to make shoes? What was that person like? Did ever a woman, perhaps, send in fabric uppers, already sewn, for finishing into slippers or boots, as we hear could happen? Did it travel West, or remain East? Was it perhaps European? What happened to this piece when the shoemaker no longer needed it or it fell out of fashion and was replaced by a model with a heel? Who before me was touched by its charm and saved it from the stove or fireplace or garbage heap?

From the style, I'd date it anywhere in the heelless era, from the Regency through part of the crinoline era, but perhaps someone has better or more correct information.

Yes, it is a straight last. Neither long side is completely, 100% even with the other, but there is no strong left-right shaping.

Really, it's a handsome thing, and will go on my desk as a paper weight. conversation piece, and remembrance of skills past, but I have other plans for it, too.

Plans or Dreams?
You see, I've been dreaming of two items.

I'd like bedroom slippers that are:
Enter the straight last. I already have Every Lady Her Own Shoemaker, and stash canvas, thread, an old sweater to felt for soles, and petersham. What I need is spare hours. Somewhere between now and June. I've already jettisoned plans to make a dress for an upcoming wedding as too much, and finishing the petticoat and spencer shan't take up every free-to-be-me hour, so...

After the bedroom slipper trial run, extremely pointy-toed Regency heelless slippers made from silk from my stash. When? Unsure yet.

About that rounded toe: I can add leather, or styrofoam (without damaging the last), to the front to add a pointed toe. Could be, will be fiddly, but I've looked at the toes of enough extants to think I might be able to squeak it out, especially in a fabric shoe.

If neither experiment works? No matter. I still have the neatest paperweight and conversation piece. It's just so friendly and it begs to be handled and admired!


﻿
﻿
﻿
Today I leave you with...small children! In a tree! With Flat Stanley! He's our visitor from Atlanta, sent to have some adventures with us, and with other folks, and to take the memories home with him as hand-written notes and photos pasted to his front. Noah and Christopher had him up a fir tree (yes, it's a hemlock, not a fir, long story) and then I hugged him on the way home as the wind tried to teach him to fly. One of the adventures resulted in a tear to his arm, but it's been repaired with a band-aid and he's still smiling. 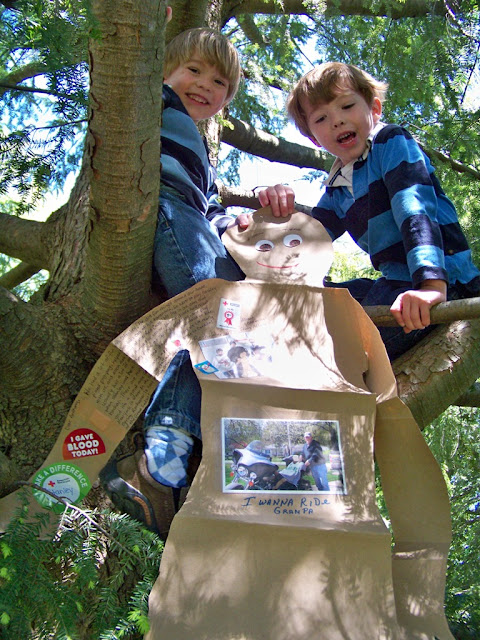 I had some 'custom' clogs made for me(The comfiest shoes ever). So the maker now 'has my feet'.
I wonder if in the future someone will buy my lasts and use them as a paperweight. lol!

I picked up a very similar last at a yard sale last summer for $2. I think it's about the same time period (1800 to about 1870). The last had dried flowers and ribbon hot glued to the top which I removed. I have plans (eventually) to use it to make a pair of 1812 era shoes. I just need to finish my 18th century ones first. :)
-Emily

LadyD, that's funny about "your feet" sitting with a manufacturer; it's cool to have bespoke shoes, but interesting to think about the future!

Vintagevisions27, so you found one too! Very cool; they just tend to pop up here and there. Will be interesting to see how your shoes turn out.

can't wait to see how your shoes turn out!
I wish i could find a last for myself to make some shies but alas i wear size 10 which was probably unheard off 200 years ago!

:} Giggle. You know that Sabine of Kleidung um 1800 made her own last, with the help of her husband...perhaps this is something you can do?

I'm so glad you've finally purchased this last! What fun! I guess (according to the rather square front) these are 1820s onward, but once you have a last you can turn it into any shape (with the help of adding cork pieces)...I can't wait for this project :)
It's lovely to see the signs of use on the wood and try to think about it's history, isn't it?

How fun would that be to make your own shoes using this? I think its a great investment whether you use it or not. Enjoy your piece of art.
Val

Thank you! I am excited about this project too: now to find those spare hours :}

Ah, the cork; that's what I needed to get. Forgot. Glad it's easy to remedy.