Over the last week or so the spencer's neckline was recut to a lower, rounded shape. Here is where we started, with a very square neckline, as like to the Met spencer example as I was able to draft it and with seam allowances added: which makes the thing look rather too large. The pieces have been basted to make fitting easier.

Reshaping the neckline was a matter folding the shoulder strap fabric into a pleasingly rounded shape, and then folding down the front pieces at the top to complete the curve, while folding up the bottom to shorten the spencer. Here are the rough folded results, pinned carefully. You can see that I have the image of the model spencer up on my computer to aid in the process.


The model spencer, Metropolitan Museum of Art, number  C.I.38.100.10, has been dated from 1800-1830, and it has a very high waistline. Since my spencer is late 1790s and I want to fit it to my cross-front dress, I kept the waistline a little lower. I also recut the center closure of the front pieces so that they would lace shut or hook-and-eye shut; I cannot overlap them and pin them as originally planned because of the neckline ruche trim.

I took off the lining, marked all the folds with blue tailor's chalk, cut the basting threads, and laid the pieces all flat. Then, using the rough marks as a guide, I drew clearer, truer curves with the chalk, then took scissors and cut the new shape. The rounding in the neckline continues beyond the shoulders to the back, so I had to cut new shoulder straps and reshape the back neckline to a more rounded shape as well.

Here is what the pattern pieces look like now. The backs of the shoulder straps are particularly wide, because the curve of the neckline really pulls in there. The seam allowances are still very wide, too, for "just in case". They'll be trimmed later.

Next up, reading for embroidering the fashion fabric in small sprigs, in soie ovale, silk chenille, and true gilt spangles! The sprigs I copied directly from that Met spencer. Here is a peep:


That's not plastic thread you're looking at, that's the fantastic shine of flat reeled (filament) silk floss, soie ovale from Au Ver a Soie. Like the silk chenille on the little rolls, way fiddly to embroider with, and a very different beast than cotton floss, spun silk thread, or crewel wool, but with experimentation, I will get the hang of it.

Today I leave you with a wish from the boys: they would really like a window seat, they say, and until I removed him for safety's sake, Christopher sat on the window sill to show me how pleasant window sitting is. 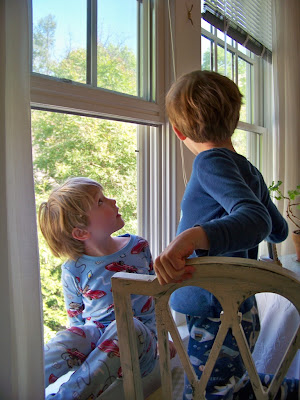