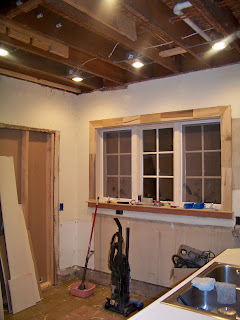 We are renovating our kitchen. Any thoughts of doing much else during this period have evaporated, pretty much. Sewing, blog posts...pouf. It's taken forever just to write this post; I 've done it in bits and drabs. Sans kitchen, and with a part-time job and 3-year-old twin boys, life must perforce simplify or Mama will collapse.

I rather like living without a real kitchen, because it forces creativity and also a visceral understanding of what it took great-great grandmothers to get meals to the table. I have few pots, limited heat sources, and as of today, no running water outside of the bathroom. Counter space is part of a table. I walk to to the basement to or to the fridge in a back room to get all but the most frequently used items. If I forget something, it's another trip. One learns to carry a tray everywhere.

Photo: A kitchen in transition: to the left, a door moved, to the right new windows, the old cabinets largely gone, the ceiling down and the new wiring and lighting in progress. Since this picture, the sink has gone bye-bye, too.

Most of the china, glass, and silver went to basement storage, and that has been a delight: it is very clear just how much mental effort went in, over the years, on selecting proper dishes and so on. Now the essentials are to hand on open shelves, and in the pretty, light-filled dining room that I've always enjoyed, so that table setting is a pleasure and dinners more elegant than in the family dining area in back, now taken over by drills, nails, and dust. 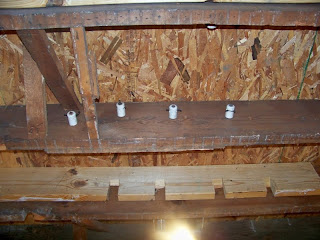 The blessed crockpot does its thing all day, and provided I have planned ahead and start in the morning, we have a relatively good dinner. A dinner not too far from the sorts that cottage folk would have provided nightly for their families. Read the early part of Lark Rise to Candleford and you will know what I am talking about. I have merely substituted stews and braises with pastas added an hour before serving for boiled meats and vegatables and puddings cooked in nets.

Photo: Household archaeology: the white tubes are ceramic spacers that neatly guided old fabric-covered wires carrying power to the original outlets, one or two per room. Houses were more dimly lit and more people used central overhead lamps hung from a chain. Curte had just removed the wires, in this picture; I rather wish he had left them for history's sake, for they weren't attached to anything. Curte's dad , a former contractor, says no one has done nice neat electrical work like that for fifty or sixy years.

The dark beams are the original 1923 beams; the gray lines showing on them are where the lath was nailed up, and the lines themselves are remnants of the innermost -- roughcoat - plaster, that was strengthened with horsehair.

The outdoor gas grill doesn't work for frying, as the gas is too far from the pan to heat it efficiently, but Curte's mother thoughtfully sent his Dad over with her mother-in-law's old electric frying pan recently and so now sautes and johnnycakes are back in the picture. My mother lent me a microwave, and I have had to play about-face with an old prejudice against them. We've not had one for seven years, and I distrusted them before that, and was always bold to tell Mom that I didn't like what came out of them. Well, guess who is eating her words, now it comes down to scratch? No, I am still not fond of them, but if we want separately cooked vegetables or potatoes or hot oatmeal, the machine does a nice job steaming the former and a gluey but edible job of the latter, and I am very thankful. 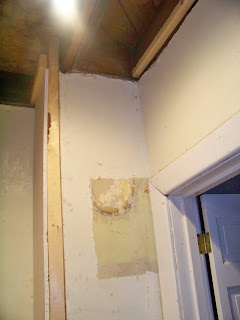 Now that the water source has gone today, it's out with the pail* and dipper. I've used one before: at the family cottages I grew up visiting on a pretty little lake, if you stayed at the red cottage you walked with your pail a minute or so to the square well, lifted the metal lid, which had a nice, scratchy-bell screech althat everyone knew, and dipped in your pail. An artesian well, the water bubbled inside in a three-cubic foot space, gravel and sand bottomed, visited by newts, and cooooold. The well would breathe a dank air in your face when you leaned down. I loved the smell. An outlet at the bottom sent the spillover running between the path's stepping stones and down a minute cress-lined stream to the lake. All of this shadowed in dappled woods. So beginning tomorrow, I have those memories every time I dip water to cook. I am looking forward to them, so long as the twins don't try to play water boy. Oh dear. Just thought of all the possibilities. How to keep them from thinking of them too?

Photo: More household archaeology. The bit of wall jutting out to the left of the door is the original brick flue. We discovered that the original wall color was a soft green then very popular for kitchens and other utility areas. That round mark? That's a portion of an old cover to a stovepipe. Now that was a discovery. We knew that the house was heated with coal, because the old coal chute it just outside the kitchen window. The coal man shoveled coal down the chute into a cellar bin. We did not, however, know that the earliest kitchen stove was coal-fired. I expected gas, for some reason. Between the kitchen stove and the coal chute nearby, no wonder there was so much old coal dust above the plaster ceiling!

(*Note: I live in Kentucky now and married into a Kentucky family here since this was Virginia. It's "bucket", in Kentucky. I've been saying bucket now for years, but when it's time to fetch and carry liquid, it's "pail" that I remember, just as "Did you check down cellar" or "The ash can's full" will come out once in awhile rather than "basement" or "garbage can". Curte has a good time with that, but he says "I reckon", so there. Once in awhile, staring at that thing we sit on together, I cannot recall any word at all except "davenport", when it's "sofa" everyone knows, or "couch", and when putting away laundry, it's to the "bureau" it goes, as much as to the "chest". And when I am dog-tired, darned if "broughten" and other strange past tense usages worm their way up from child-speak or the idiom of my birthplace, I don't know which.) 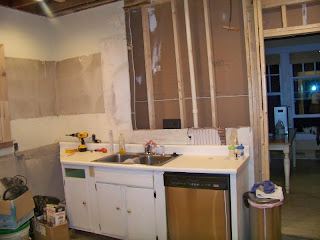 Light talk and funny talk aside, let's quit the cooking and get to the real cause of why I haven't finished documenting the dresses made for the Jane Austen Festival. Here's the dirt: it's dirt. Literal piles of it. First it was lath and plaster and coal dust when Curte took the old cracked ceiling down. Maybe if I am feeling chipper sometime I'll regale you with the coal dust caper. Then it was lumber dust and drywall dust, and soon it will be plumbing mess and who knows what. This is an older house, built in 1923, and the kitchen is in the middle of a three-rooms-deep layout (not original), and whether Curte or workmen enter from front or back, they are tramping through other rooms, and they've been working in the cellar too, where the clean laundry is, and my pantry.

Photo: the rest of the kitchen. The wall moves back, and it's sayonara to the sink for a new one goes in another corner, to save space. Later owners colored the walls lime green. It was actualy a really sunny, pretty color. The original floor? Resin pine, painted bluey-green around the edges, with a rectangle of linoleum laid in the center. Years of water trailing off the linoleum and later stains from floors tacked on top left the original strong, but too stained to refinish. So we are painting it once again, a bluey-green, but in a checkerboard pattern. The original ceiling? Apparently either a mustard (unless that was a primer), or a soft robin's-egg-blue, a gorgeous color. I saved a little piece. Our porch ceiling we painted that color, so it's good to know that the first owners liked that color, too.

At this juncture I think I have a pretty good grasp on what living in a town where coal fires heated homes, or on a farm during a drought, would have been like to those who had to maintain the house, whether mama or maid. It's good to understand this. I am going to understand it very well indeed when the two-three months this job will take is over.
Posted by ZipZip at 3:42 PM

You are so brave and patient! We got a man in to do ours and were only without for 4 days. But I can already tell it's going to be a gorgeous kitchen. Love the new window! I love American houses so much, they look so... English! hehehe

Thank you. Sometimes I do not feel so patient :} Our house is older and wasn't in good repair when we bought it, so much of what we are doing is rehab: jacking up floors, new heat and air, and so on. That's why it's taking so long.

Funny you should say our house looks English. Lexington is an Anglophile town, especially in its love of horses and horse-racing. To see what it looks like here, have a look at http://www.visitlex.com/.

Our house design is native to much of the American South, a story and a half tall, with a front porch all across the front and often ditto in back (ours included). There's a variant in Canada. In the 1920s such houses became quite popular and their like spread widely across parts of North America. They are marked by a largely symmetric front, with wide dormer, that front porch held by decorative columns, and tons of windows on all four sides. Downstairs, sadly, the builders went with a silly 1920s idea of convenience and forwent a central hall, so you walk right into the living room. Ugh: messy in winter, and no intermediate space between public and private parts of the house. We may change that someday. By the way, by central I mean that it splits the house in half front to back. In the front of the house, traditionally arches lead to primary rooms, such as dining room and living room, while further in back doors lead to more private rooms, such as a library or morning room, kitchen, or whatnot. In the south in very old houses, the kitchen is located in the basement or in an outside building due to fear of fire. In late eighteenth and early nineteeenth century houses, there was often a door in back leading outside.

However, upstairs we have made a wide central hall that runs front to back, wide enough, actually, to live in. This is a common feature of early and Southern houses as it carries lots of light and air, and aids privacy since there is space between each room's door. We dote on this hallway and spend much time in it. Eventually it will hold a library at the house front; already at the back it is a sitting area lit by the same sorts of windows as in the kitchen, only taller.

What sorts of houses are common where you live?