Late eighteenth cenrtury hair was big, wasn't it? First we had Marie Antoinette and her giant poufs topped with sailing ships and whole birds. Then we had giant boufs with tails in back, as if ladies had slept in the poufs for months and then just teased them out in frustration.

By the mid 1790s, fashionable women transferred their passion from big frizz to big, long locks. A spiral-curl lock or two might hang fetchingly over a shoulder and inspire plays like The Rape of the Lock earlier in the century, but now those curly long locks multiplied until the head was covered with them.

The locks could be pulled up into messy masses, or sometimes woven more carefully with ribbons,or headbands, or left au natural. For this era was the prelude to Romanticism, and what is more romantic than tendrils around the face and shoulders?

Here are two mid-1790s fashion plates from The Gallery of Fashion that show two variations on the look.

As alway, please click the images for larger versions.

Please also pardon any typos...for an experiment, I typed the whole thing on my Blackberry...excepting image code, which I set up earlier. Um, sore fingers ahead. 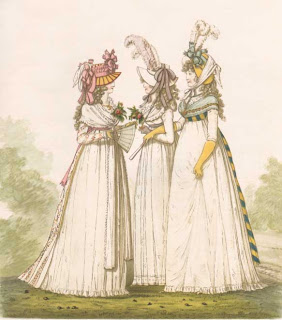 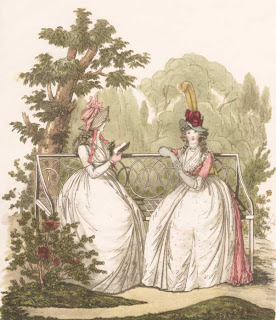 By 1796, high fashion began to take the hair high up onto the head again and while curls were still the rage, they became sparser, set closer to the head, and kept more controlled, more in emulation of the Classical than of Nature's Child. 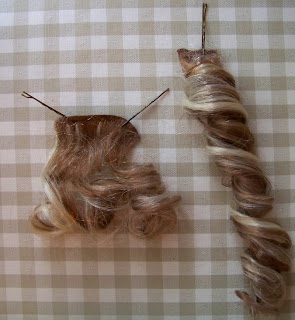 My problem for the 1790s picnic we held Saturday was translating this look onto a 21st century head of hair, bobbed and straightened. Not good "lockige" material.

Lauren of The Lady of Portland House and her friends at the Oregon Regency Society, who favor the same decade our group does, seem to have gone for full wigs as a solution. There are variations on the Hair Metal theme out there in wig world, with names like "Lionness". Teased and shaped a little, these do admirably.

I had neither the money nor the chutzpah to go for a wig, though; I like my own hair, and wondered if I could do a variation on Vivcore's Georgian pouf wiglet (Google it for a great tutorial). Then I could use my own front and back hair.

But midway through making it, it began to look too poufy, and I had a Eureka moment. Are you familiar with the Paris Hilton headband wiglet that some stores sell? Have you seen the Costumer's Manifesto tutorial for hair for the play Les Liaisons Dangereuses? I have, and, a day before the picnic, the lightbulb blinking on after months of intermittent mindless musing, I pulled out a Scunci 1.5-inch-wide elastic headband bought years ago, some brown thread and a needle, and 10-12 curled wefts of imitation hair some 22 inches long, from Sally Beauty Supply that I bought for 5 dollars, again years ago.

The wefts I had cut into slices some 2 or 3 inches wide early this summer. I had found a wooden dowel a half inch in diameter, and had, one by one, wound wefts around one end of it like one winds hair around a curler, pinned the hair ends in place with a bobby pin, and plunged the dowel and its hair into a pot of boiling water for about 30 seconds, enough to make the strands on the weft take a permanent curl. Once gently worked off the dowel and dried, each weft was now a long sausage curl. Left alone, the ingredients for any formal look that requires sausage curls -- mid-eighteenth century, 1830s, 1850s, 1870s. Pulled out with the fingers, loose long locks.

You can see the wefts above, bobby pins run through them.

Certainly you can just pin the wefts onto your head with bobby pins, mixing wefts with your own hair, I tried that and it works -- just think hair extensions.

An easier route, the one I ended up taking, is to sew the tops of the wefts to the headband. I set a weft to the outer edge of the band, and sewed it to the band with a few stitches. Then I set a weft next to it and did the same...repeating until I had gone almost halfway round the band.

Then I sewed another row of wefts on a half an inch in from the band edge. That proved to be enough hair for me, but you might add as much as you like.

You can sew how rough the sewing is, below.

If you wish, cover the sewing with shorter locks or a period head wrap: since I was wearing a hat, I did not.

Put the headband on, bobby pin it to your hair to hold it in place, and style it as you like: push some towards the front of your head, other parts to the sides, pile some of the locks up on your head and pin in place as I did... If thick enough and of a similar color to your own hair, it blends with your hair nicely.

Remember to pull your own natural front hair forwards towards your face and to spiral-curl it with curlers or curling iron or foam curling rods. Using setting lotion on dry hair, and blow-dry your hair to speed things up. When you take the curlers out, your front hair will be curly, too. Now you can blend it with your new locks. If you have long hair, looping some of it up for slightly shorter by-the-face face curls looks nice.
Use fashion plates and paintings of the era to help decide how to arrange it into a coiffure with hat, hair wrap, turban, ribbons, feathers. (See my Research Resources page...link in menu at blog top, to find fashion plates.) 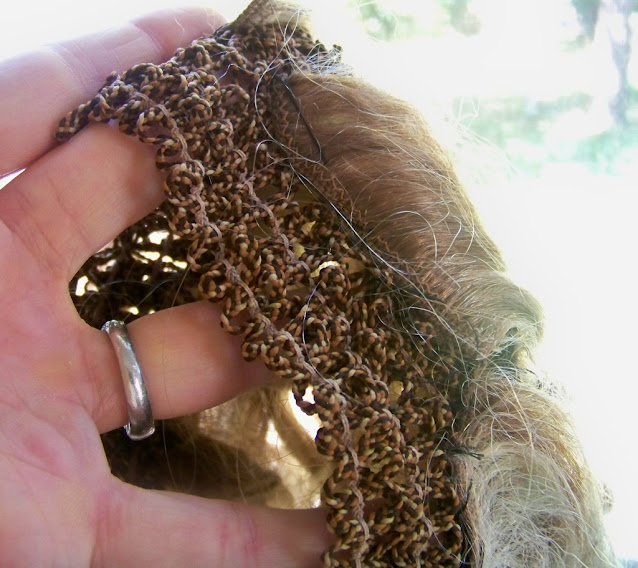 Here above is the sewing; rough, eh? 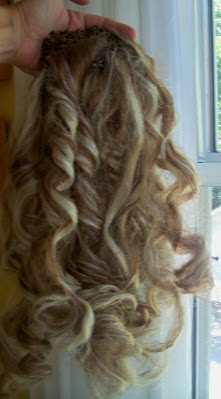 Here above is the completed wiglet.

This is just a precis, for the hat was very simple.

You see the fashion plate above in which the young woman is wearing a hat with a band around it, tied in a 3-way bow in front and with the fringed end pointing obliquely up, and a plume set behind the bow? That was my model.

I used a hat bought my freshman year of college and modified it. The base hat is a boater of sorts, the brim width the same all the way around, with and three-plus inch straight crown.

I sewed two lengths of millinery wire to the inside from crown out to the edge of the brim and bent the wire to bring the hat equally down on either side, which style was also popular in 1795.

Then I tacked a scrap of shot pink and cream silk-cotton around the brim, tucking raw edges under the scrap for a more finished look.

Next, another scrap was formed into a bow, and one end, longer than the other, brought up obliquely in back.Because the fabric frayed naturally, I took advantage of it and frayed the bow's sides for a two-tone effect. Again, an idea from fashion plates, and you see fringing in trim of the day.

The bow was pinned with a silver hatpin to the front of the hat.

Finally, I took two medium ostrich feathers, tacked them together with thread to make a single fluffier plume, and inserted it behind the hatband, tacking it into place. Should have tacked it more: it twisted. The plume should be set so the top cuves forward -- that means the back of the feather faces front. 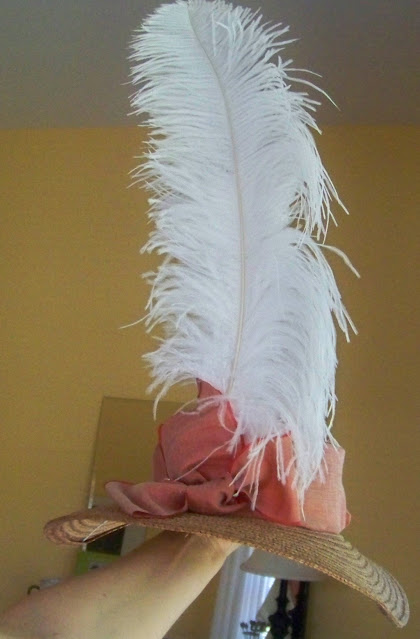 Here you go. A pretty 1790s look, with minimal outlay of construction time or funds. The research and thought time? Months and months. I have a slow brain. 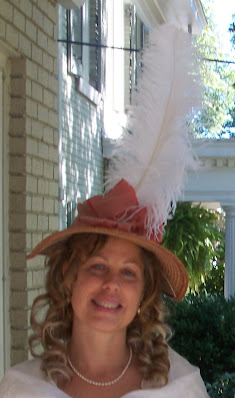 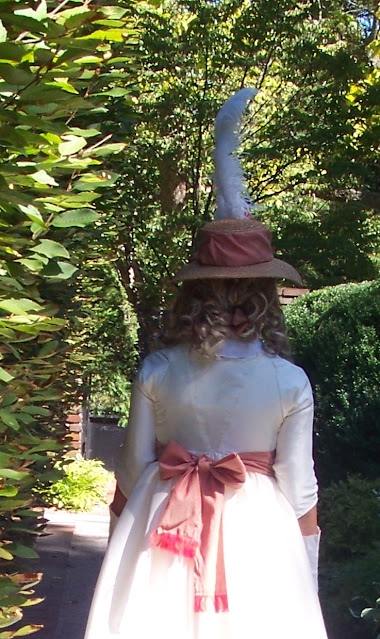