Three Snows in a Row: Unusual Here in Central Kentucky

Good portions of the United States have had a miserable and dangerous time this past seven or eight days and portions of Kentucky have been trashed by repeat rounds of ice and sleet. The Twitter account of Chris Bailey, our local weatherman, is full of downed trees and power lines, blocked roads and ice-sheathed everything, along with bizarre videos of sleet pouring off of roofs like barrel-fulls of ball bearings. Several friends were without power or power and water both, though the main damage has been to the east of us. The snow and cold will linger a few more days.

Outdoors, all is quiet except for the birds. Our street has been white and rarely traveled for over a week. 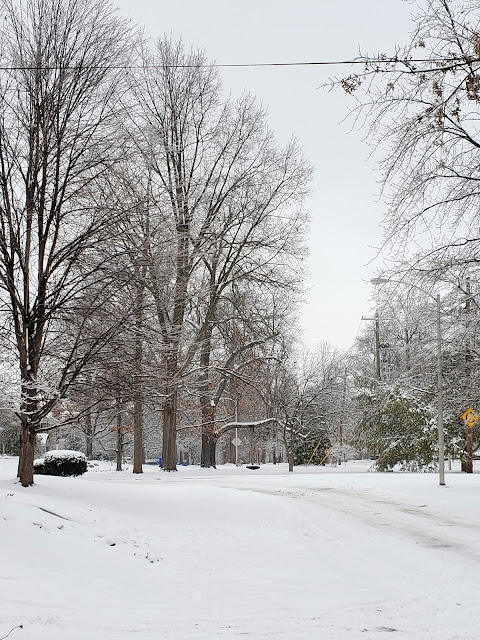 At our house, we avoided a power outage this time, and the main concern has been feeding the birds, because everything is covered thus: 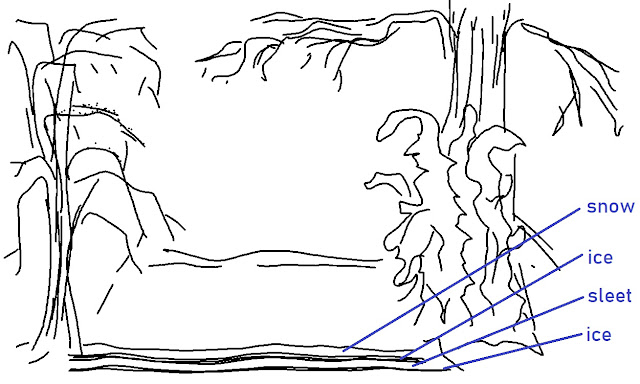 With two layers of ice on the ground, and most of the branches still encased, the birds can't get to food too easily. The below picture was at high magnification. The branches aren't blurry -- that's ice. 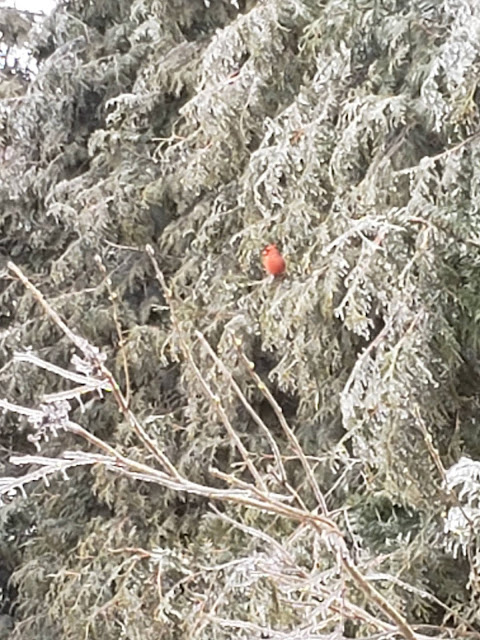 We put out multiple feeding stations: the hanging feeder for the titmice and finches, cardinals, chickadees and sparrows; pans under the porch overhang and sprinkled over the snow for the robins and starlings -- who fussed at each other until realizing there was plenty of food for all -- and bluejays, and crows. I spread peanut butter and seed on a pinecone and hung it next to the arbor vitae for the wee birds, but the bigger birds found it until driven away by a squirrel, who hung upside down on it and chomped away.

Here robins and a starling, feathers all puffed out against the cold, share the feeding pan in a protected spot next to the back door. 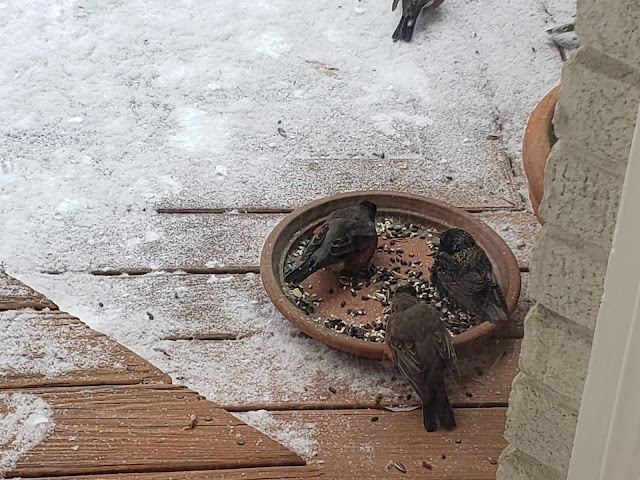 Inside the back door, the kitties watched and watched during most of the daylight hours, Nutmeg chattering and flattening herself, and sometimes pawing the door. Here they are after the first ice storm, when there was less white on the ground. The birds knew they are safe, so ate unconcernedly, and watched us all indoors as we watched them. It's a mutual watching society. 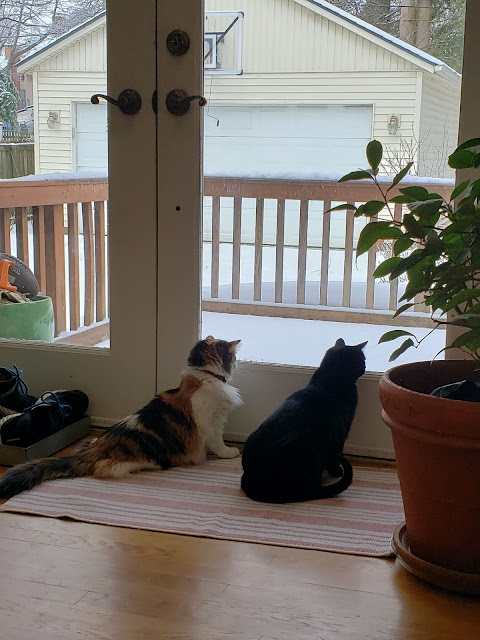 Over the week, some of the ice had not melted as much as evaporated in the cold, so the trees droop less, thank Heaven, and we no longer have 25 to 30 birds at a time. There is plenty of birdsong, so I think they are all right, or hoping so. Understand that ice storms can be really hard on the populations, although the spring nesting is usually highly successful, what with less competition. Oh my, the world is a hard place, even when it's beautiful.
In the evenings, I'd cup my hands around my eyes to shade them, and peer outdoors to see if it might be snowing again. Sometimes it was, although the flakes were often small enough that the camera didn't catch them. I thought this picture was atmospheric: inside we have windmill palm trees, and the shadow of one is thrown onto the porch ceiling. A warm-cold contrast, I'd say. 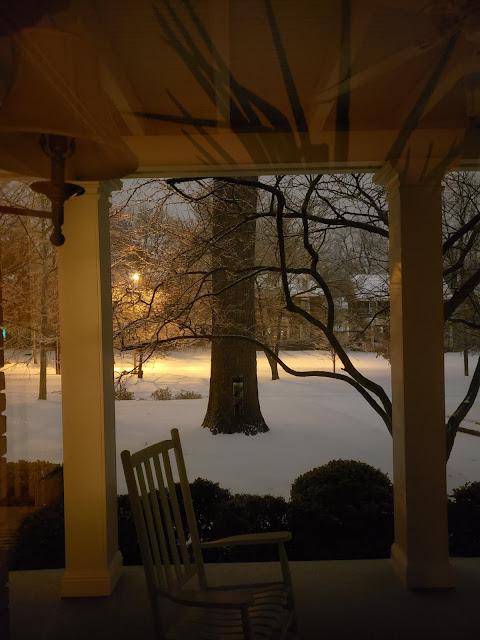 I took a walk this afternoon to take in the quiet and the sounds of the cardinals calling and a downy woodpecker somewhere up in a maple. Walking proved to be less than a silent affair:

With each step I'd sink into fluff, then the boot would meet a hard surface that would suddenly give way down into the next layer. Like walking on a giant block of peanut brittle that kept falling through onto marshmallow or something.
Then there was the sledding. The second-best day proved to be during the second storm, while it sleeted. That's not snow on the ground, those are ice pellets. The sledding was fast and furious, as one of our friends described it. Sledding on ball bearings would be :}
A sign of the times: masked sledding. The coverings did add warmth. And yes, one of our friends is filming the ride while sliding on a saucer sled, backwards. Fearless dude.
One of the joys of being with your buddies: 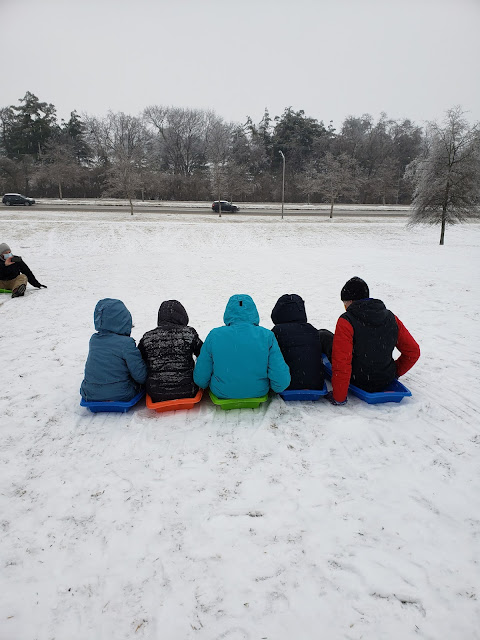 Yesterday's day on the slopes proved to be the best. The snow was thick and hard-packed -- the ice under cover now -- the temperature good and cold -- about 21 F when we arrived about 9:30 -- and our friends and a few acquaintances already there. Oh, did we have fun all morning! I was shaky-legged afterwards from walking up the hill so many times.
I was entirely and perfectly happily a kid again:
The thaw began this morning, Sunday. It's still thick in most spots, but the roofs are all dripping and where sunshine has warmed the surface, tips of grass are beginning to show. This was an historic week-plus, what with three storms. It didn't drop as much as we've had other years, but it's the longest lasting, and it was lovely to feel like I was in Ithaca once again, with the house bright with reflected light and the as bright with the prospect of playing or walking outdoors day after day in a world made wonderful. Once the animals were fed, that is.
May you be safe wherever you are!
Posted by ZipZip at 5:02 PM

Dear Natalie,
we've had similar weather the past week with ice and snow, very low temperatures, high winds, puffy and hungry birds and squirrels (and even a fox)...then on the third day it stopped ice-raining and snowing and we've been smiled at from blue skies...I enjoyed the walks in the white blanket, the silence, only accompanied by the steps in the deep snow (the sound we find when wringing silk with the hands)...it instantly sets me back to the winters of my long ago childhood days, which suddenly felt like happening only yesterday.
After years and years of bland seasons this winter brought lots of water for our dried out woods and maybe the cold helped to reduce the beetle infested trees to get rid of their plague...but most of all it spurs the longing for spring more than ever!

Oh my word!!! What a strange and beautiful and disconcerting time. I've been feeling hard for Texans in power outages. A massive fail in privatising amenities. :(
Thank you for looking after the birds. It goes to show just how warm feathers can be that they are getting through the cold!

I would love to have all those birds to feed in my backyard, but we have no trees, other than a couple small palms, which no self-respecting bird would hang around those. I know even my cat Chloe misses chattering to the birds in the yard at our old house.
I think your yard looks so pretty with all the snow and ice. I'd probably run out there and immediately fall on my butt, which I did on my Mom's front steps the first time I was there and she had some snow.
Val

Run outside and immediately lose footing and plop on the patootie? Oh yes. That's why Curte didn't want me out in the back yard today. It's thawing and the layers of solid ice are exposed in spots.

I didn't know birds wouldn't hang out in palms! How interesting. I guess the fronds won't bear their weight. Nuts...

Mrs. C., public utilities exist but in this area they're mostly in rural areas. We have electric cooperatives across Kentucky, and they're helpful organizations. They have banded together with other cooperatives in surrounding states to get fallen trees off roads and power lines in the mountain counties. In Jackson County I understand much of the electric grid is going to have to be rebuilt, and there's a pole, they reported in this morning's newspaper, that has been taken out three times so far by falling trees. The mountains are heavily wooded.

There are public water utilities, too, but many are very small, serving serving isolated and struggling communities in the mountains, and dealing with leaky pipes, mismanagement, people siphoning water off, and polluted water from the remains of coal and oil extraction.

Sabine, yes! That's very much what I felt out in the snow. Childhood came immediately back and I sledded just as hard as the twins and their boy and girl buddies. Some of the happiest moments in ages. In fact, I put a video Christopher took of me heading downhill on a sled made from tape-wrapped cardboard, string, and a discarded swimming board. It was as fast as the other sleds.

Hugs to all three of you,

The sledding looks like great fun! Despite having lots of snow here I haven't been sledding yet. I've been too busy with other winter activities. :) It's good that the birds, and the people, made it through the cold.

Let's see, there's skating and snoeshowing, and cross-country skiing, and tramping through the woods to enjoy the fairyland of snow-covered everything. And all of the indoor fun. You have all kinds of opportunities! I can get homesick for my snowy hometown of Ithaca...so am glad that you're taking advantage of it all.