Where were we? It's been a little while since I worked on this project. Oh yes, we're cutting the pattern to petticoat length and finally constructing the thing. The project has turned into yet another test of period materials and methods to see how they work. Nonetheless, if the petticoat works, it will give my cotton skirt the regulation -- to use the popular term of the time -- flare.

This time we're cutting and seaming, but the seams are not normal ones...

Cutting the Pattern to Petticoat Length

Petticoats are usually a little shorter than outer skirts. Therefore, I subtracted 1 1/2" inches (6.35cm) off the pattern, which is 40 inches/100cm in front. That works out to 38" long when finished, but leaving a 1/2" seam allowance in place. That allowance will be needed to seam the bottom facing and a hem binding to. Hem binding on a petticoat that doesn't touch the ground? What an oddity, but that's what's suggested.

So I copied the pattern pieces onto fresh paper (oh joy), and cut off the bottoms. This way, I have the original skirt pattern plus the petticoat pattern to go with it.

(In case you missed any posts in this very long petticoat series, you can find them on the 1890s: Costumes, Research, and Documentation page.)

The next, rather obvious step was to cut out the fabric pieces.

I used silk shantung from some old silk curtains I made years ago.

The silk fabric has body and resistance to wrinkles, although probably not to the degree that moreen has. The latter fabric was a favorite among dressmaking writers for silk petticoats (Davis, Mallon), as we have read. As it happened, the two larger pieces were cut on the bias, but not on the perfect bias and another was pieced, because I placed them puzzle-wise to conserve fabric.The bottom of the petticoat is to be faced, hence the 1/2 inch (1.27cm) seam allowance.

The side seams were cut with a 1/4 inch (.635cm) seam allowance. Note: I would have used all metric measures and forgone inches and feet, but the presser foot and markings on the treadle sewing machine are in inches, and they are wonderfully natural sewing guides.

The top of the petticoat has a 1/2-inch seam allowance, but the plan is to cut a yoke for the petticoat, so the extra is just in case I change my mind :}

Next, all the skirt pieces were seamed together, but watch out! The seams are emphatically not normal ones. Because just about every seam is on the bias and thus at the fabric's weakest position, we have to sew in a fabric stay on each one so that the fabric doesn't stretch at the seam and cause ripples and puckers and a poor skirt hang. Sophie Klug writes in the 1895 book The Art of Dressmaking, "Where two bias edges are to be joined in one seam, a stay tape or strip of lining must be basted at one side and sewed in with the seam to prevent stretching." (p. 35)

I was going to use bias tape for the job, but big thanks to Quinn of The Quintessential Clothes Pen for pointing out that using bias tape would have been bias over bias and therefore not much of a help. I looked back at documentation on an 1890s skirt in my collection, and sure enough, there's a straight-grain stay there. Why I'd forgotten such an interesting detail, haven't a clue.

Not only would the strip be a seam stay, but it would also bind the seam allowance for a neat, durable finish. Petticoats normally have nicely finished seams because they get so much wear. Twofer!

So, I cut 1" strips of thin cotton (from the old muslin curtain lining fabric -- why waste it?) on the straight as long as each skirt seam.

Then I ran the strips through a 1" bias tape maker widget (the Clover brand version; there are others).

It's pretty easy to use. First, you start feeding the fabric strip into the channel. 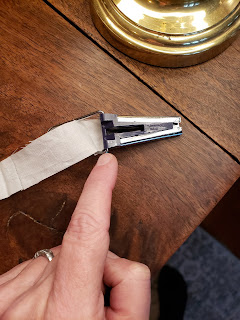 Help the fabric through the channel by sticking a pin into the fabric and pulling... 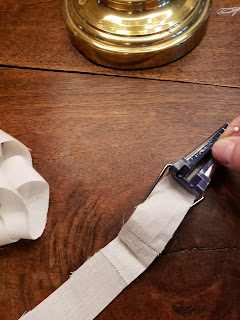 ...and pull at the tip to pull the fabric right out the end. 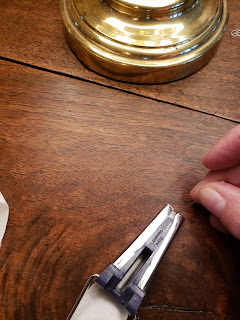 Voila! You have bias tape, or straight tape, in my case. 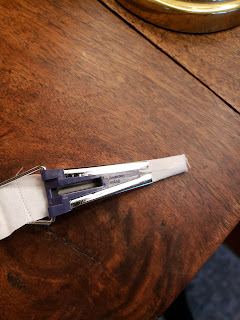 You will want to make sure the fabric strip is out of the way of the little wire handle.
After you start pulling the fabric through, go to your ironing board, pin a bit of the finished tape to the board, and heat your iron to steam heat level. Then slowly pull the gadget, feeding the fabric into it, and pressing the resulting tape immediately.
I found that the fabric wanted to go in wonky sometimes, so the pulling process was slow. Other times the steam from the iron was so hot that I just pushed the bias tape maker along in front of it, like so:

To create a seam, the two skirt pieces that were to be seamed were laid, right sides together, ready to sew. On top, I laid the prepared cotton binding with its pressed edge at the fashion fabric edge and and the rest of it open and ready to fold over the top of the completed seam to bind it. All three layers were carefully pinned together, trying to lift, handle, and tug the fabric as little as possible. Every tug can stretch the bias-cut fabric.

Each seam was sewn from skirt top to bottom in case the ends should get a bit out of alignment.

Immediately after sewing a seam, I folded over the prepared binding to wrap the seam allowance in it, turned in the already prepared fold so no raw edges would be showing, and sewed it down on the covered seam allowance to finish the seam.

Readers, I started sewing the seams with the Singer 28k handcrank machine. The 28k came out during the 1880s, so this was a logical choice. However, we all know silk can be no fun to sew by machine, and the long and slippery skirt pieces were determined to be naughty, and I only had my left hand to guide the fabric, because the right hand was cranking the machine! Here's a sample, videoed by my son, Christopher.

I even tested the antique Singer binder attachment. It worked; the attachments nearly always do -- alas that I don't have a video, because it's interesting! -- but again, trying to do all this with a hand crank on silk was annoying and error-prone. The process became so unfun that I chucked that idea, removed the first seam, and hand-sewed them all. The main seam I made in running stitch with a back stitch every five stitches or so, 6-8 stitches per inch. Then the binding was of course hemmed. I enjoy hand-sewing, so it was a relaxed effort.
Here is an example of a completed seam. The sewing thread blends in so well that it's practically invisible to the camera this afternoon. 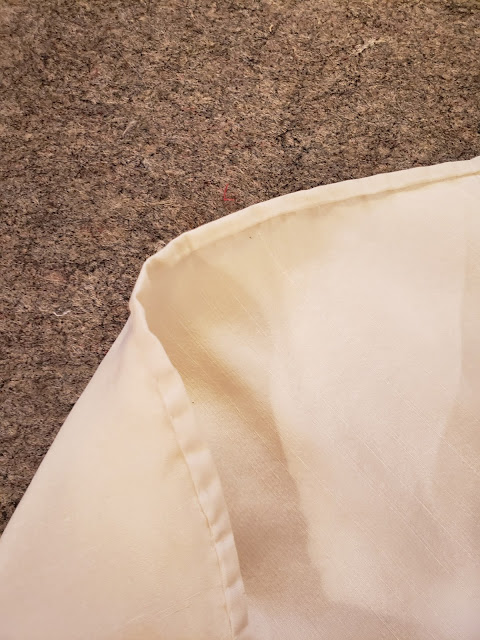 The hand-sewing makes sense within the context of undergarments of the day. Hand-sewn underthings were desirable as being particularly dainty.
I wasn't the only one relaxing. Nutmeg settled in, too. Here we have evidence that some kitties will sleep on just about anything. For some unaccountable reason, she found my sewing box to be a good pillow.

Interested...
(Yes, I made sure she wasn't into anything sharp.) 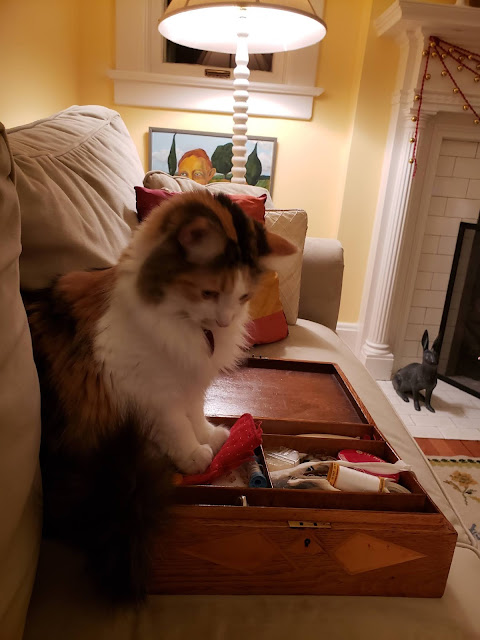 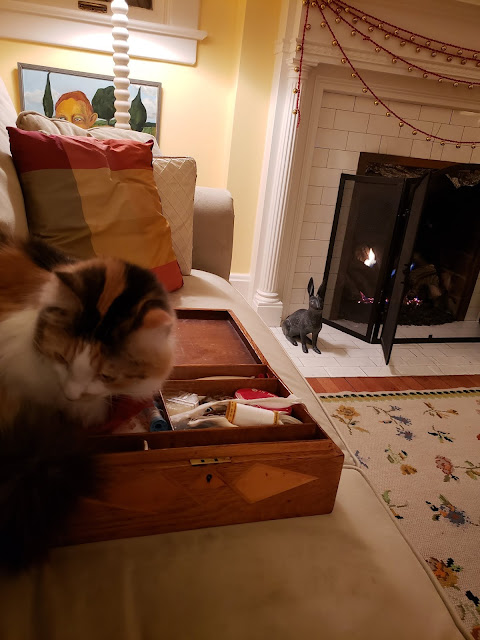 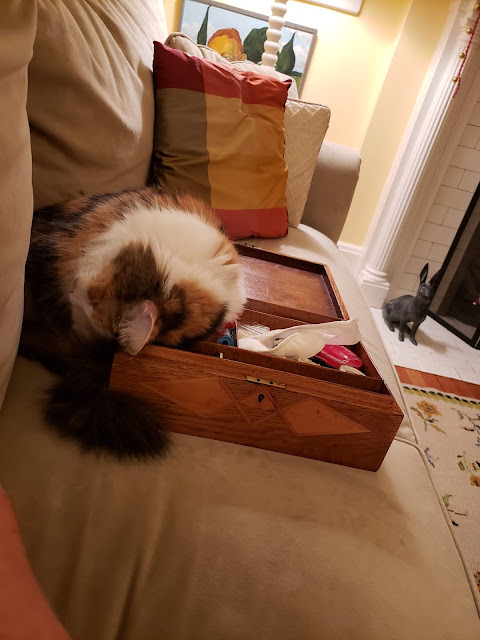 It's January. A good time for napping. Wishing you safety and many naps this month!
Next steps with the petticoat? Facing the bottom and inserting the surprise stiffening. Yep, a mid-winter surprise for you.
Posted by ZipZip at 9:20 PM

It's easy to forget details when there are so many to remember, in addition to the other things one has to remember in life! ;)

Neat! Sewing progress! It's fun to see the video of your machine! It does sound tricky... bias silk being guided with only one hand! I don't blame you for switching to the hand sew method. :) And you had such wonderful company!

Dear Quinn,
Sewing progress, yes! This project has been slower than pouring cold molasses. I forgot to add a picture of the final seams, but that's coming.

Meanwhile, the mid-weight hair cloth arrived in the mail the other day. It's meant for suit interlinings but will be used as the base for the frills, in line with multiple 1890s' magazines' recommendations. Am curious to see how much poof it creates. So did the vintage velvet ribbon for the decoration. If you're looking for pretty or unusual ribbon, I can vouch that VelvetandMetal on Etsy has good ones, fairly reasonably priced.

Hoping you're getting outdoors; probably too hard to cycle in winter there, but perhaps you've traded that for other treks. Here we're walking every evening, bundled top to toe.