An 1895 Petticoat With Boning and Stiffened Frills: Draft Correction and Pattern Cutting

Never trust your first draft, right? Edits are always necessary, and the truism held here, too. Only, for once it wasn't my fault, but a typo on the original 1895 Illustrierte Frauenzeitung draft! Despite the extra work, it's nice not to be saying, "Oh, noooooo".

(Oh! (In case you missed any posts in this petticoat series, you can find them on the 1890s: Costumes, Research, and Documentation page.)

Anyhow, I cut out all the pattern pieces, and laid them on the floor, folding in the seam allowances where needed so I could check the fit.

Something wrong with the side-back piece, which, in action, actually forms part of the back and gives enough fabric to allow the godet flutes or organ pleats to take shape. Or the back piece.

Thinking I could have mis-measured, the next eon was spent in running a meter stick along all the seams, measuring them, and checking them against the numbers on the draft. I couldn't find my mistake.

Frustrated, and wanting to get the draft right so that we could see what a godet petticoat cut is really like, I went to bed. And thought about it, and thought about angles. That side-back piece was the one that confused me when drafting it, for the original draft of the piece had two different measures for the line that would be used to create the side-back seam angle. The top of the draft read 90, and the bottom, 99. What if one was wrong and it created a bad angle on the pattern piece?
Urr, thinking about pattern pieces is just what I should be doing instead of falling asleep. On the other hand, I could be thinking of far darker things. Our poor, hurting world... Perhaps a quiet geometry problem before bed is what the doctor ordered. 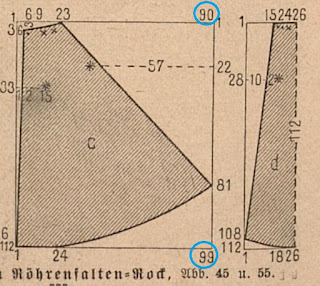 Now, if you have compared the cut pattern pieces with the draft, you may already have guessed which measure was the correct one and which was the typo.
The bottom measure -- the 99cm -- was the culprit. The FrauenZeitung typesetter may be having his little joke on me, all these years later, and you know what, it happened right at Halloween.  OOOoo...
By drawing out the draft's bottom measure to 99cm, the back seam on that piece strettttched out. When the pattern piece was cut out and its right side laid up next to the back piece, its right side was too long.
Good thing I caught the mistake, or we would have even more fabric in the back than we meant to!

Pulling out the meter stick and ruler and pencil -- and eraser -- I redrew just the mistaken draft line, this time 9 cm less than before, and that changed the angle and made the right side seam shorter, as hoped. Problem solved. Phew.

Oh, and the little gap between the side front and side back piece length? Fudging it. A cm or so is not worth it.
Rohrenfalten-Rock skirt pattern piece completed! Now I have a master pattern any time I want to make this sort of skirt.

This next step isn't illustrated.
Petticoats are usually a little shorter than outer skirts. I am going to need to cut 2 1/2" inches (6.35cm) off this skirt that's ~ 40 inches/100cm in front, or 2 inches shorter with 1/2" seam allowance that I will need to seam the bottom facing and a hem binding to. Hem binding on a petticoat that doesn't touch the ground? What an oddity, but, that's what's suggested.
So I will copy the pattern pieces onto fresh paper (oh joy), and cut off the bottoms. Then we'll be ready to cut the fabric, at long last!

...the boys and Grandmother carved a pumpkin for Halloween, and the boys made Pan de Muerto for Spanish class to celebrate Dia de Muertos, which has a bit of similarity to our church's All Souls Day but which has, to my mind, more joyful elements. Our pumpkin's looking forward to noshing on some of that semi-sweet, orange-and-lemon scented yeast bread, and so am I.

Thank goodness it showed up in the pattern not after you cut it out :) and YUMMY bread!

At least your C piece would have been too long rather than too short! And you solved the mystery! Congratulations!

Thanks to the both of you. It's so tempting to just cut and go, but I *really* want to see how the cut affects the way the godet plaits work, so I gritted through double-checking everything. This project may end up taking forever because of it.