Etsy, oh Etsy, what a treasure box you are. A Pandora's box, too, on occasion, but definitely a treasure box. Sometimes I do extant costume research by searching through the listings, and sometimes extant pieces turn up unexpectedly. A crush collar did turn up recently, and boy, was I pleased to see it.
Here it is.
Last fall -- last fall! Has it been that long? -- I made a crush collar with one of those super-popular neck bows, following the instructions from a number of women's magazines. It turned out decently, given the plain cotton voile from which it was made.
However, I found the front closure a little heavy-looking. Examining the photo I made while wearing it, part of the issue is that it needs more hooks and eyes, it might be a trifle wide, and it was cut from a straight piece of fabric, not from a curved piece, which would hug the neck better.
I'd like to make another collar at some point, this time with rosettes, rather like the extant collar, and cut like it, too. In the meantime, let's learn what we can about the nature and construction of the extant collar.

Anatomy of a Collar

The collar, says its Etsy listing, is 14 inches long. Its width varies from 2 inches high at the ends to 2 1/4 inches at the center. We don't know how the width is measured: is it based on the width of the backing, or the slightly variable width of the fashion fabric, which has been puffed into a crushed look on the front? I don't know if the 1/4" change is really visible at all.
I made a pattern based on the measurements from a scrap of paper, but without adding a curve to the cut, and tried it on. The extant collar would be about half an inch too small. However, it has a pleasing width. I compared it to a collar from July 15, 1894 issue of Illustrierte Frauen-Zeitung (p.159), which I featured in About Interchangeable Trims, and Especially Collars. The extant collar is a little narrower than that one.
Here is the paper version of the extant collar.
In the mid-1890s, a collar like this one often featured the rosettes to either side of the neck, although there is a small chance that the rosettes were worn front and back. Here are several examples of collars with trims to the side: they were quite the thing in the middle of the decade.
I wanted to see if I could determine if this collar would be worn with the rosettes to the side. I set up a Google slide, and inserted the Etsy photo of the collar from the back. Knowing the collar was two inches across, I drew a line from top to bottom of the collar. Then I copied the line, which became a sort of 2" long ruler, rotated it until it was parallel to the ends of the collar, and set a copy next to the little pile of wide stitching at the end of the collar, and then again twice from the collar's right end to the little pile of wide stitches marking the other rosette.

Finally, I transferred the markings to my paper collar, and tried it on. Well, given that the collar is a bit small, it's still a bit hard to tell, but the rosette positioning does seem to work better when they are set to either side of the neck. The collar would be much easier to attach and detach that way, anyhow.
Let's look at  several more pictures.


I find this last image very, very interesting, when taken in combination with the view of the lining. The lining doesn't show any tacking stitches from the folds of the fashion fabric. I suspect, then, that the construction is as follows. The fashion fabric piece, a very wide rectangle cut on the bias, was laid on a table, front side down. The worker pinched lush folds, some of them on an angle, and made tacking stitches where the folds joined up. She may have had the pattern template or the lining nearby so she could get the dimensions correct -- remember that the pattern itself is curved, not a straight band. She may have doubled the fabric into a tube, or just turned the edges of the sides and ends inward. Once the folds were in place, she overhanded the piece to the lining, which had already been finished and the hooks and eyes attached to it. She may have very lightly pressed the front so that the folds weren't overly puffy, but not flattened. She then attached the rosettes she had made. Voila - collar.
Today I leave you with a little silliness to brighten up a pandemic-beleaguered world. Our table in the den has a tail... 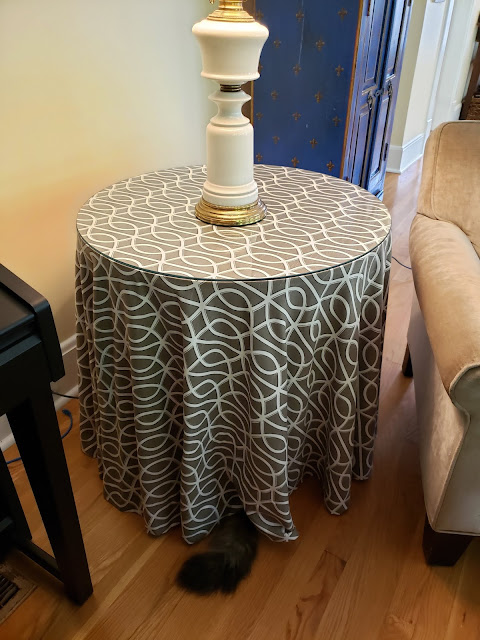 Nutmeg kitty thought she was well hidden.
Posted by ZipZip at 5:14 PM

I enjoyed your tour of the crushed collar and the table-with-tail. I've seen other cats also think they're hidden with tails poking out. Interesting behavior! :) It does seem that this collar is intended to have the rosettes to each side--that would allow the curviest part of the collar to be under the chin, which seems like appropriate shaping for comfort.