Updated April 24, 2021
Where are we in this research? Getting towards the end, really. Here is the entirety of what has been published so far:

This time, let's talk more about the extravagant skirt held out by the underpinnings. An interlining wasn't the only way to help give the outer skirt the proper set. Oh no, modistes had more to add to the game.

Skirt Fluting and "Godet Plaits": Making A Skirt Flare in Back with Pleats and Elastic or Ribbons


Skirts with "flutes" in the back, or "godet plaits", or "organ plaits", or "funnel plaits", were a popular way of giving the back of a skirt a handsome fullness, in the shape of undulating folds.

Godet plaits apparently first appeared in the latter part of 1893, just when skirt circumference was beginning to increase. I find first mention of them in fall newspapers, such as The Progress:


I love how the newspaper compares godet plaits to organ pipes, but ones that get wider at the bottom. In this early definition, the godet plaits are held with "straps on the under side" of the skirt. So far as I can tell, these pleats were held to their funnel shape by some sort of interior tapes/straps/elastic, and were often interlined with haircloth or grasscloth, etc. to keep the plaits from collapsing.

Mentions of godet pleats occur repeatedly in all the magazines I consulted, and they appear repeatedly in American newspapers. Along with the name of the pleats, the number varied: there could be two, three, or more of these pleats, and there would have to be ties/straps/elastic for each pleat.

The Ladies Home Journal, in January 1894, (p.21), explained how godet plaits should be constructed:


Make the back of the skirt in three organ or godet plaits, which are simply single box plaits, an inch and a half wide at the top and spreading at the bottom to five or six inches; they must keep a rounded look, so cannot be pressed, but must be kept in place by inside tapes. Gathered backs are still in favor, though the plaited ones are newer.

As the text makes clear, these are emphatically not flattened box pleats like we make for skirts of other eras.

Demorest's Family Magazine (December 1894, p. 121), stated that the box plaits at the top flow out into the godet folds: "the back fullness held in box-plaits at the waist, rounding out into godet folds below. These plaits are held in place with elastic bands."

Ladies Home Journal specifies in the "The Skirt of Today": "the back laid in three or four godets or narrow round plaits, which are held by elastic straps five and fifteen inches below the belt" [my emphasis]. (Ladies Home Journal, "Gowns for Occasional Use", January 1895, p. 22)

Important note: look at the interior frill or balayeuse with a pinked lower edge at the bottom inside of the skirt! Here's another tool for the toolbox.

The Ladies Home Journal offered another solution in April 1895. The pleats were tied in place by ribbons. The ties would lie on top of the exterior of the petticoat, and hold the exterior fabric in its funnel shapes. 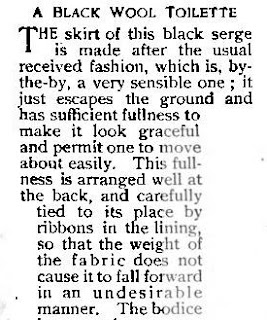 The pretty fluted effect could also be attained without box pleating it. The Kirkland skirt, illustrated below, was gored as most skirts were, and "the fullness [was] held in graceful flutes" using the elastic straps, per normal. However, the making-up directions directed the seamstress to gather the back of the skirt, not pleat it. The illustration shows a back that is clearly gathered.


In June 1895, The Ladies Home Journal described another way to handle fluting. It sounds rather hot to wear, especially in June under duck fabric, white or not!

Yes, you read that right: "The skirt has the usual fashionable flare, and the organ plaits which are in the back are stuffed with cotton over a quarter of a yard below the belt, so that the round shape is preserved" (my emphasis).

Here's the image of the outfit involved. You can see that the skirt at front is relatively narrow. It's only at the sides and back that there is much width.

We will never know if Mary Colver's patent underskirt was ever manufactured, but her US patent 559,681 remains in government records to this day. The patented underskirt was "to enable the outside dress-skirts of ladies apparel to be draped or shaped according to a desired style or fashion without applying to such skirts themselves, as a part thereof, the heavy and expensive linings and trimmings, such as haircloth, chamois, or other stiffening or Shaping materials". 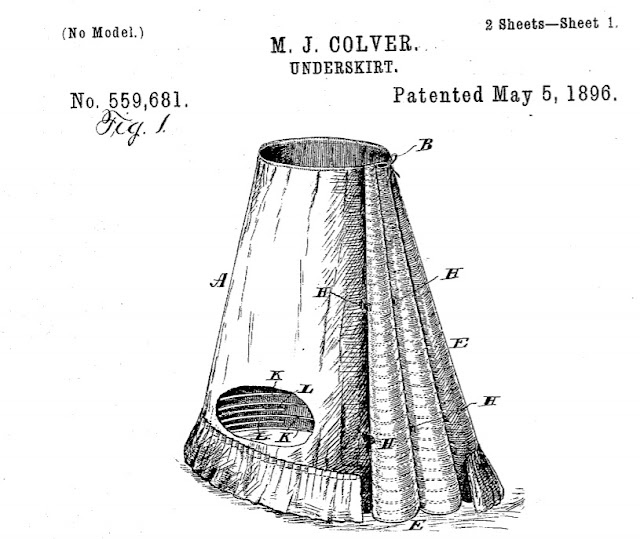 An Alternative to Godet Plaits


Not everyone wanted the back side of their skirt to fall in large rounded shapes, especially if those godet plaits were stuffed or one had to worry about the shape of their skirt while traveling. In May of 1895, Mrs. Hooper wrote of an alternative, "rival" style that would be effective for women who preferred a less bountiful effect. In this skirt the godet plaits were dispensed with in favor of just two box pleats that have simply been pressed into position, not held by tapes "caught into place". The skirt is still interlined, though...at the end of the quotation below Mrs. Hooper warns her readers to avoid extra long skirts, because they are "to heavy to lift comfortably". Egad. The New Woman still had to contend with carrying a burden around with her. 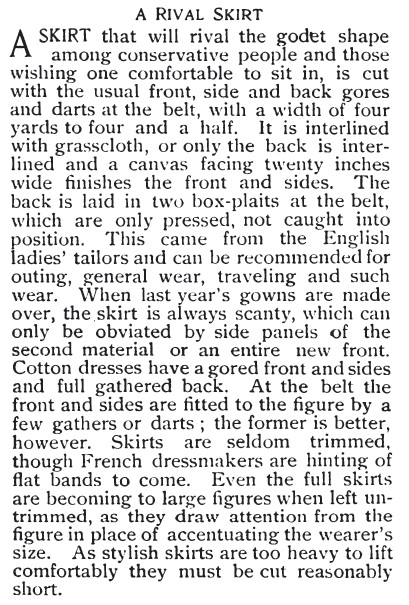 
Let's review. To give a skirt handsome back fullness in the form of fluted folds, popularly known as godet plaits, we should:
Another costuming note: Truly Victorian's Ripple Skirt from 1895 features the godets and the interior tapes.

Amid all this thinking and writing, meteorological spring has arrived in the Bluegrass. Snowdrops have been blooming for a while, and Lenten roses, and crocus, and witch hazel, but those are the very earliest harbingers, and they handle snow and frost with aplomb, although not ice.

Now, the -- well, it's name escapes me, but it's an invasive bush -- is just beginning to put out wee leaf buds. 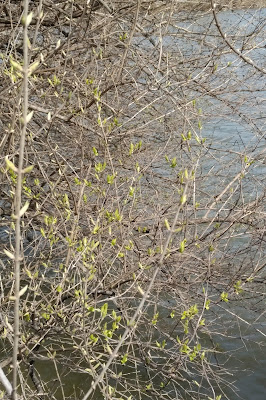 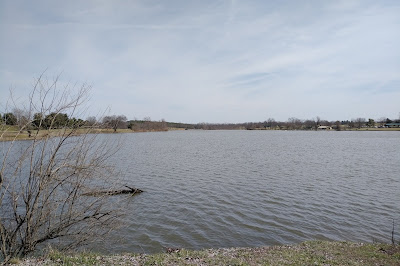 I am standing at one of our local lakes, a previous reservoir hand-dug at the turn of the 20th century to provide water for the town. Fishermen and women are casting lines, the Canada geese are honking, and somewhere there are herons blending in with the shoreline, fishing. Nearby, there are probably kingfishers doing the same thing. The waters are patting against the shore in that pleasing way they have. The road nearby is a bit of a distraction but doesn't spoil the feeling of aliveness and the knowledge that the next six weeks will green our landscape once again.


Next time we will continue our exploration of the forms of stiffenings that made mid-1890s the architectural shapes that hold our attention today. Hint: think wire and rattan.
Posted by ZipZip at 8:10 PM