All of the sources so far have been from women's magazines. What about real people? What types of collars did they wear?

Of course, the photographic record is going to have some biases:
Nonetheless, here is an unscientific offering of women of the 1890s, showing the collars they wore day to day. A good point to remember is that wearing a collar was the norm and the general social expectation during the daytime; only for evening formal events might someone dispense with one.

Let's start with an lovely portrait of a young woman named Mabel Payson, at the top of this post. She is wearing what appears to be a double collar: what I think would be a plain "stock" collar, like a man's collar turned around so the opening is in the back, with lace folded over the top of it, and a handsome bow in the back.

Here is one of my favorite pictures of people from the era: this group of women is on an outing and the lady in the middle is carrying an early camera. The photo may be from the late 1890s, because the sleeves are narrow, while the jackets are of a style familiar since the earlier years in the decade, and the hats are larger and the hair fuller than at the beginning of the decade. Because they wear their jackets closed, we cannot see if the fronts of their bodices are bloused: if they are, that's a sure sign of the decade's end. The lady in the middle is sporting an extra tall collar. 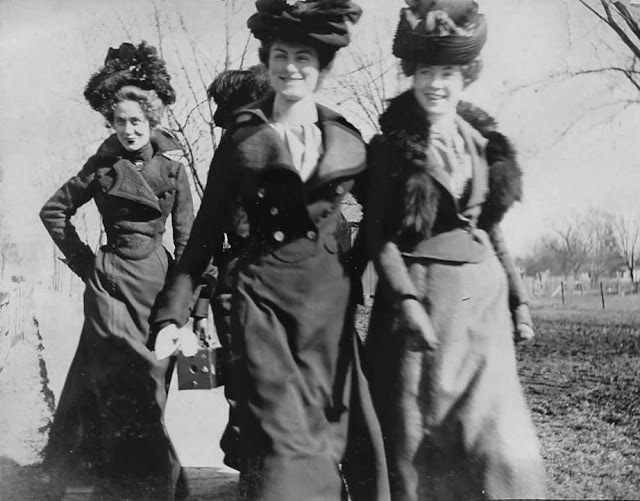 Here below, Mrs. Cowman, wears a collar perhaps of velvet given its texture and lack of shine, with just a hint on the left side that there is a bow in the back. Velvet trims were very popular during the period.

Crush collar without a bow. The collar folds are so clear that I included the photo so you could see.

The girl or young woman below wears a simply cut shirtwaist with a turned-up collar. It appears she has tied a ribbon around it into a bow in back. Given the family's simplicity of dress, and especially the man's lack of a coat, which normally was worn in all except the most informal of occasions, the family likely has limited means.

Below, A double collar. Lace on top in the popular standing flared style, and probably velvet over it, with what appear to be folds -- thus, a crush collar.

This person wears a crush collar with what appears to be a low bow in back. The collar is in a different fabric than the bodice and it may be, in fact, ribbon.

This young woman's collar is apparently of the same fabric as her bodice, and it may be integral -- that is, there is no added collar at all.

I find this last photo poignant. Everyone is sitting on a wooden porch with the clapboard walls and wavy-glassed windows behind them, plain ladderback chairs and rockers around them. Do I know such surroundings! They're cross-legged, scorning the seating, at their ease on the porch floor. Some of them are working on fluffy I-don't-know-whats, while the woman at right is draped in ribbon. The young woman on the left's shirtwaist has a ruffled yoke liked by the young, a ribbon pinned just at the close of her collar. The third young woman from the right, a bit hazy because it looks like she was moving when the camera shutter snapped, is wearing an unfitted dress, perhaps a "Mother Hubbard". It looks a little frowsy: was she ill? The lady on the right is wearing a waist with a small print and frilled collar, with a striped skirt. Wonder what the little boys are doing? No one, by the way, is wearing a crush collar.

That ends the little view of the variety of collars that can be found in photographs. Next time, we're actually going to make one!
Posted by ZipZip at 3:31 PM