After so long waiting for this dress, gracious, nearly 1 2/3 years, why not see it being worn for a first try and a first critique at the Louisville, KY Jane Austen Festival before we dig into the construction?

From top to toe, then, here we go.

A Shocking Bad Hat -- No, A Strikingly Good Hat 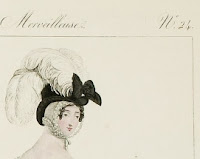 There's really no getting around it: I do not make hats well. Having found a vintage dressage hat of real beaver, I'd thought success pretty likely if I added my best plumes, held them in place with thread to applied antique velvet ribbon across the top and around the crown's base, their bottoms camouflaged with a composed silk ribbon knot.

I was after minor theme running through the Vernet plates, the Chapeau Anglaise.

The result was heavy and amateurish, the black emphasizing the circles under my eyes, the plumes overlarge and always tending to sway too one side rather than over the top of the hat, and the knot too floufy, rose-like 1790s to fit the tailored base. I hadn't dared to use a large satin bow. If you too lived through bow-head time in the 1980s, you'll forgive me. I had some massive ones, including a red silk satin so big that its red tails stuck out to either side of my head -- get the image? --  like a devil cat's ears.

Moreover, the hat, designed for equestrian wear, was sturdy and heavy, and it squashed my ears until they complained nearly incessantly.

So, about the darling hat in summer sky blue and grain-gold (my fancy name for mustard) in the top image?

The hat was not a planned purchase...but, follow me into Rebecca Burnham's shop, Shocking Bad Hats, and see why it was foregone that it'd end up toppling the other topper.

My friend Polly found the shop first. We walked past the camp and crew of the HMS Acasta, and I eyed their tiny, primping and prancing rooster Nelson with amusement, and there was the shop, set up in a former smokehouse.

I thought the shop assistant, who's neat and I now know is named Megan, had an awfully good as well as unusual hat...and look at those on the table. Ooh, nice design. We're lucky at the Jane Austen Festival to have several good millinery choices: The Bohemian Belle and Lydia Fast among them. This shop was new.


Inside stone walls, whitewashed, it was pleasant after the brute heat outside, and so a courtesy stay lengthened into a real examination of what was on offer.


It wasn't long before the blue hat against the wall had me over looking at it, then trying it on, then going all pink-faced and sparkle-eyed, and forgetting a self-imposed no-buys injunction. Then out came the reticule and the payment for Promenade, as the design's called, and a little light-headed maybe, I bid everyone goodbye, head high. The rest of the day went delightfully, and really, some of the credit goes to the hat.

Besides, this hat fit: no ear squishing :}

The Vernet 1.0 Summertime Dress: A Critique


The Vernet Robe à la Ninon was designed for springtime, I am fairly sure, not for deep, deep summertime in a sultry riverside city in America, where humidity can hang in the air until it almost forms a haze, unless a stray breeze should travel through.

Therefore, the dress' first outing was in an abbreviated style: short puffed sleeves replacing the long ones and no bust poufs. Really, can you see me wearing those full-size poufs in company outside of a show?


Wearing this dress was a pleasure. It moved easily, armscyses and sleeves did not bind. It did not drag the ground; 1814 dresses didn't, as a rule, so it was practical. The embroidery looked very pretty. The percale wicked away perspiration and the silk gauze overskirt and sleeves hid any perspiration stains: providential when it's 92+ and feels like 95% humidity. The white reflected the light rather than absorbed it, and it gleamed in the sunshine due to the silk gauze. The neckline was flattering. I could see wearing it with a ruff on another occasion, or using the original sleeves, or in fact, many another type of sleeve to create multiple effects. You know already that I like a multi-functional dress.

On the other hand, this was truly a 1.0 outing, for the fit needs work. Because I don't sew too frequently, and because this blog is all about essays, trials, learning, and learning by mistakes, the below looks at what went wrong and how it might be improved.

Here is the original dress plate, below. Compare it to the photos above. Just take yer eyes off that gargantuan bust and giraffe proportions, will you, and stop laughing? 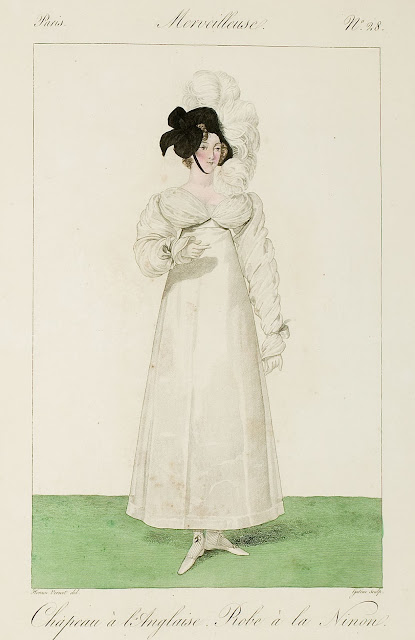 There was also another neckline issue. Our Ninon wore her dress without a handkerchief. However, she was French. I felt undressed outdoors at a British-style festival without some sort of coverage, although this dress is modestly cut. Funny that I've internalized the concept of covering up: not only was I following contemporary British custom, but as I age, nowadays I cover up in real life, as well, for social reasons as well as to avoid further sun damage to the chest, a thin-skinned spot prone to wrinkling and skin cancer.

I'd planned a ruff and chemisette, but time ran out, so a small gauze handkerchief stood duty instead, soon as I found one at the festival, anyway. It worked fine although it lacked panache. Next time I wear the dress short-sleeved, it's a wuverly ruff of antique lace and silk gauze over a mull base.

Hair: Emily did my hair, and it was beautiful: a crown of curls behind, and side curls before to keep the face looking elongated and the cheekbones highlighted. More curls to the side appeared as the day went on, so next time pomade will help keep them patched to the head, but overall the look is attractive and so simple.

The gloves worked well, and are the over-the-elbow length popular in 1814, though they're not kid. I am not going to spoil kid by exposing it to high humidity. Ninon may have been a fashionista willing to sacrifice her duds in the name of gorgeousness; I played her frugal French housewife cousin, instead. The gorgeous embroidered wool shawl, the gift of a sweet friend, was just right. The black shoes and their tied-ribbon straps were functional fakes, the earrings good for the period.

JaneFest 2016: a Feast of Lovely People

Janefest was, as always, mostly about the people. This year Polly, Jenni, Emily and I stayed over, had the beloved night-before girl-talk fest and last-minute costume prep session, and shared the festival's formal tea together. You must understand that Bonny Wise, who with JASNA Louisville created and manages this festival and has made it the terrific success that it is, understands how to put on a proper afternoon tea better than most people in the U.S., and pulls it off -- at a museum, out of a catering kitchen. With vintage bone china. Bingley's tea. Handmade everything. Beautifully and gracefully served. There's a reason it's famous among American Janeites.

Then the all-important visits with Janeites and costumers I so forward to seeing. It seems a little much to name everyone here as if I was composing some sort of list, but let me say that it was a joy to see so many of you again, and to meet some you for the first time, especially after having followed your blogs, in some cases for 7-8 years.

If you want to see what the festival was like and you're looking for pictures, check Facebook, but also The Pioneer Times.

So it's over, and the dress is to be spot-cleaned and all the accessories freshened, and now it's on to describing the dress construction, as long promised for the Vernet project, and then it's time for a break until the dress calls me to complete it in its original vision.

What a pleasant read...I truly enjoyed every line!
The summertime edition of the Ninon dress looks very charming and with the new hat it gives a complete different picture than the "heavy" orginal...still I can't wait seeing the poufs all on and even if it just would be for one photo :)
Very much like you I do prefer the version you've shown at the Jane Austen Festival. Indeed the dress is very versatile and you can match it with a whole lot of beautiful accessories to follow the fashions around mid 1810s.

Thank you for sharing.
Sabine

Dear Sabine,
Thank you! With the alterations for better fit, the base dress can be used all kinds of ways. I have already designed two variations, one featuring additions to the gauze and small bust poufs plus floufier sleeves, and the second featuring a spencer, a ruff, no gauze layer, and added cutwork near the hem. Think I like the base design so much that will reuse it.

Never thought I'd look well in mid-teens fashions but at this point in my life these fashions may look better on me than others. Huge thanks for edging me that direction!