Edited September 8, 2020
Wheeeee-ooooo! It fits with no tweaks needed. [Wipes brow before perspiration mars the bodice.] I was worried it might be too tight, or would gap above the bust, or there'd be some other awful problem. The worries were allayed. By plenty of grace and good fortune it worked out. I love Truly Victorian patterns.

When my arm isn't raised, the bodice is smooth across the front. There is the inevitable loose wrinkle at the underarm, courtesy the extra seam allowance I couldn't fold under enough for the second fitting as well, as the aging bust issue that padding will correct, but otherwise, to my eye it's nice.

I may raise the waistline a little bit, but not by much: left a last hook and eye undone in case shortening was needed.  Mmm, what do you think? Allowing for a 1/2" hem allowance, is the bodice short enough for the slightly raised 1870 waistline?

Sewing -- and Basting -- the Seams

Below we have all the pieces laid out. I had numbered each piece when I made the toile, so I'd lay it out correctly. Too often have I played the dork card and gotten pieces mixed up, so the one minute it took to label them saved me potentially hours.

Following Heather McNaughton's and Harper's Bazar directions, the backs were sewn together first, then each side back was sewn to the back. Curved seam...always fun. It helps to pin and baste carefully. Then each side to each side back. What about the fronts? Read on... 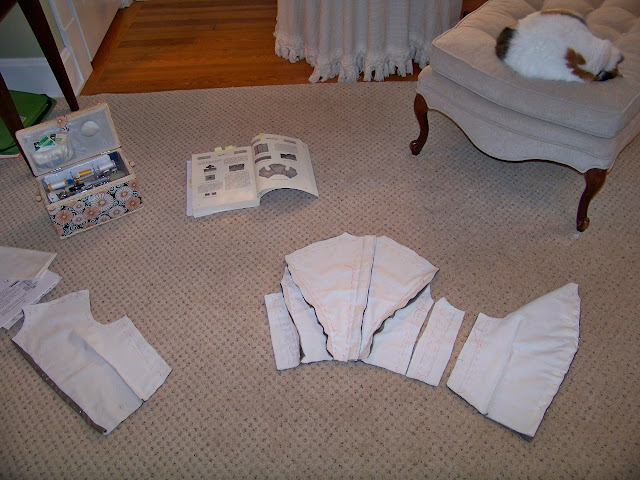 Detail of pinning. The red threads? That's the basting holding lining, interlining and fashion fabric together. The penciled lines? The seam lines. I drew them so I'd be sure to get the seams right, having a premonition that if I didn't nothing good would follow. 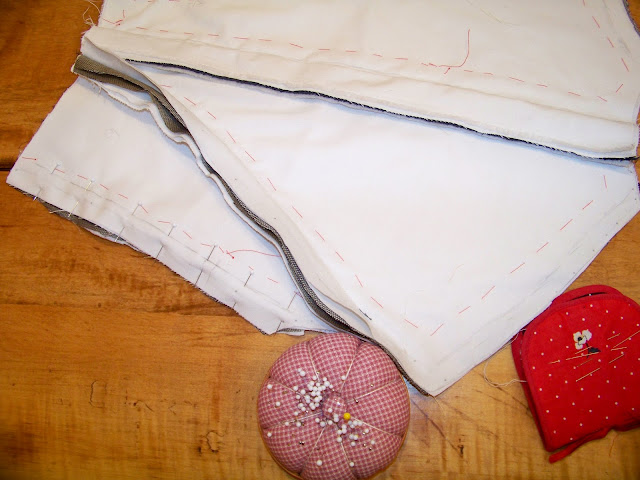 All machine sewing is done on this circa 1911 Willcox and Gibbs treadle below. The dear girl is pretty beat up, her gold trim paint worn off, drawers mended, wood trim missing, even a piece of her top broken off, but as my friend Johnny says, she sews a dream more than 100 years later, so the consistent use she's had means she is a peculiarly good machine.

How do you like the environs? That's the roughed-in master bath she sits in. I haven't the faintest clue where my poor girl goes when it's finished out. There's scarcely room for her anywhere. 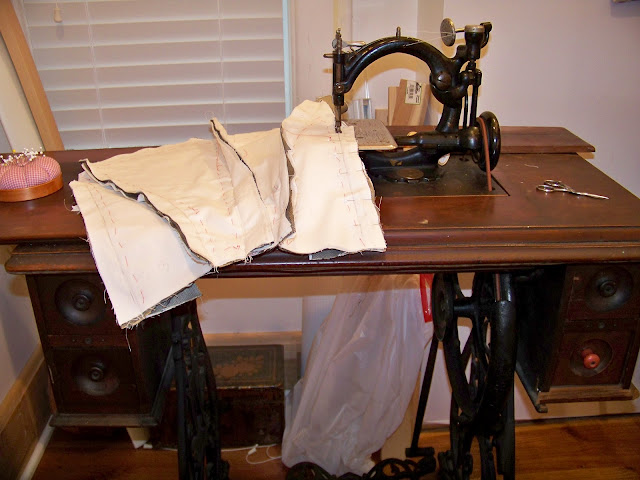 After sewing all of the seams except the side to side front, it was time to baste the front-side seams and the shoulder seams. That way if I had goofed the front closure, I could adjust the front-side seams by moving the front piece. Remember, Heather says I am to leave that side piece's seam allowance alone.

Oh, day of reckoning. In the two images below, the side seams are basted...oops, no picture of the shoulder basting, but really, that's overkill. 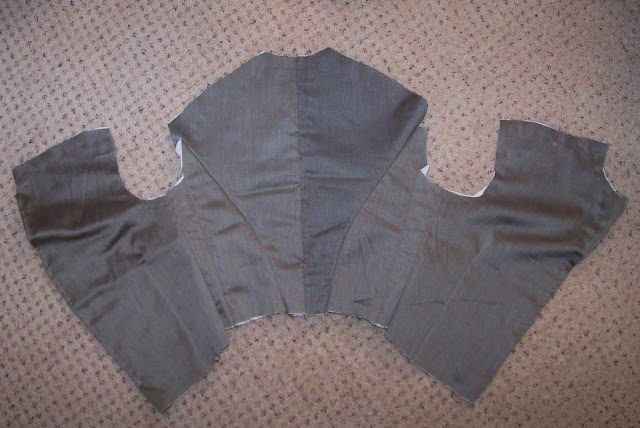 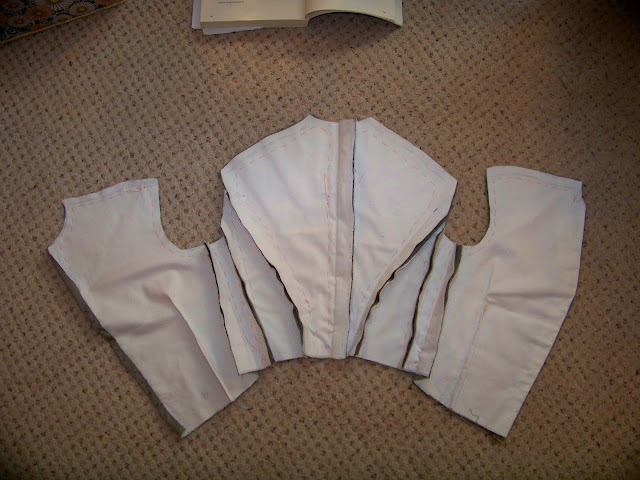 Then the fitting. On with the corset. Do up the hooks and eyes with shaky fingers. Uh-oh, is it too tight? Oh dear, oh.....phewwwwwww. We're okay.

Mirror, mirror, on the wall, is my pride in for a fall? Stern reminder to self: reign in any tendency towards hubris and retain proper humility after this lucky fit, or something horrible is likely to happen to the sleeves. 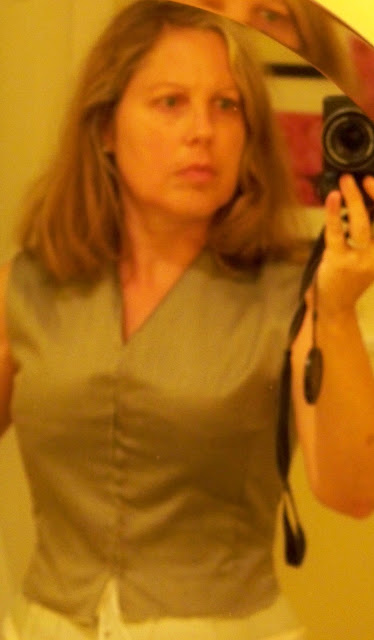 No, that's not a model pose. That's me thinking I needed to move to allow the camera
to see the entire bodice, not move the camera. Silly girl. Besides, what model would display
her double chin? 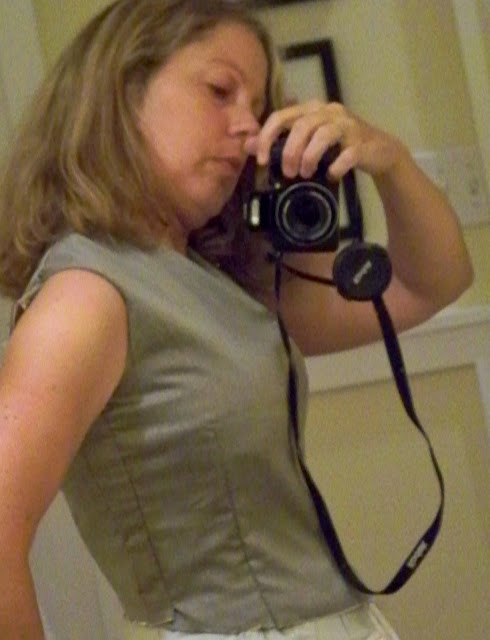 Yup, that's snug all right. It will stretch a bit. 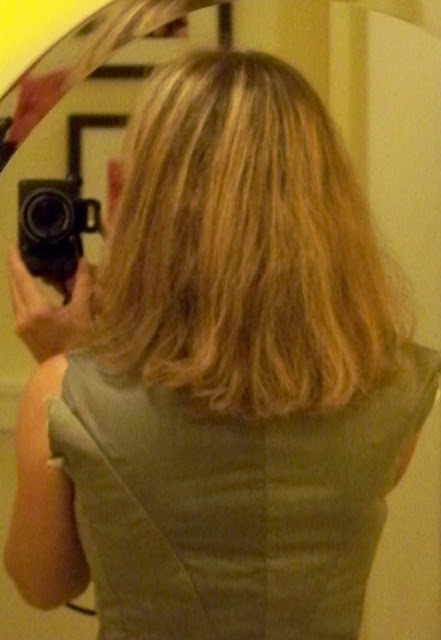 The fit is good enough and the lining-interlining-fashion fabric combination sturdy enough that I shan't bone the bodice. I'll do the channels, of course, but no, no boning, not for now. (Fall 2020: I should have added the boning, and connected the bodice and skirt with a series of hooks and eyes, too. The bodice would have fit better and the connection with the skirt would keep the bodice from riding up. Live and learn...and take a lesson from it!)

Next up? Sleeves and finishing the neckline and the waistline in rapid, sensible period fashion...but without cording!  So sorry Harper's Bazar, but I shan't cord either neckline or waistline after all, just the armscyes.

Why? I have an 1869 silk dress in my collection. It was altered at least once during the nineteenth century, and appears to have been used as a costume later...that's where the hook and eye tape came from that you see in the second image below.
(Fall 2020 edit: Cassidy, a dress historian and costumer, now owns the dress. I sent it to her, along with a number of other garments from my collection, as she would be able to understand and share much more about their design and construction, and conserve them, far better than I could. Recently she analyzed the dress in a post titled Ca. 1866 Brown Gown - A Close-Up Look and video. I urge you to watch it, because she points out much that I entirely missed, while confirming some of what I found. Note that she dates the dress to 1866-1867. Am in agreement, having spent some of the summer reading Peterson's Magazines from 1866-1870. Finally, she plans to create a pattern from it at some point. Crossing fingers!)

In the first photo of the outside of the dress, we see thread in giant running stitch. What does it hold? 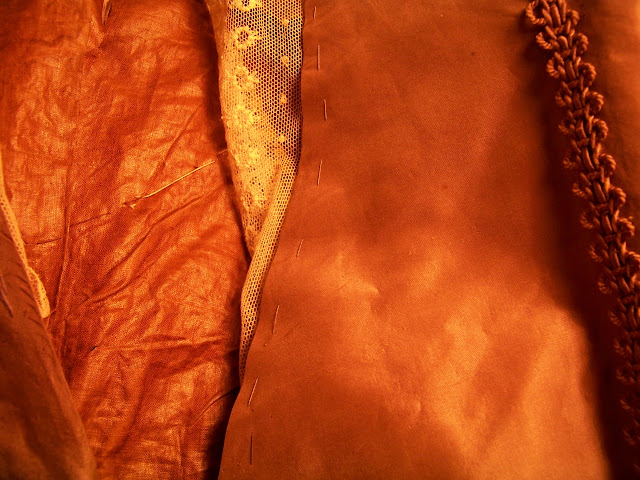 Turns out, it tacks the net lace collar into place. (By the way, that collar is a much later addition, I have learned) The collar is sandwiched between the lining and the fashion fabric. You can't see it from the outside because the collar covers the stitches.

So how are the insides finished? The fashion fabric raw edge was turned in, the lining was turned in, and the lining was hemmed to the turned in allowance of the fashion fabric. The stitches are tiny, but there aren't very many of them. No stitch shows on the outside of the dress. (Edit: Cassidy says the neckline treatment dates to a much later alteration. The original neckline would have been piped. Sigh. I should have piped mine. A pitfall of using an extant dress as a model, when you aren't aware of the effect of later alterations!)

Nota bene: more on that collar later. It's just a length of lace, whose ends have been trimmed and finished off... 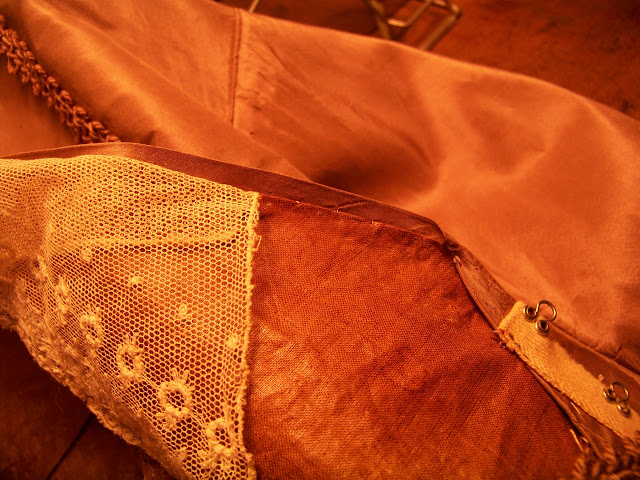 Until next time, Ciao.
Posted by ZipZip at 9:05 PM

What an adventure! You are doing a splendid job here. I can't wait to see the final results!

Good morning to you in Maryland! How is it up there? We miss you.

Yes, it's a fun adventure, and I am enjoying the change from Regency seriousness. The dress is going to be all fluff and puff and pouf!

Hugs to all of you,

It's looking fine and the colour really suits you too. Looking forward to the extravaganza to come!

The fabric is really interesting. It was sold by Hancock's (big box store) as cotton broadcloth, but the saleslady was suspicious of the fabric content labeling, and so am I.

The weave is a complex tiny jacquard (?), with tiny triangles in black and white-gray. The triangles show white on one side, black on the other.

Part of the threads feel cottony, while the others feel more like silk. The hand has no synthetic feel to it.

I am thinking it's actually a light suiting of some sort, or tie fabric. Who knows. It's really neat stuff and has a great drape. I've had it for at least 5 years.

I enjoy your blog, I love seeing the details of your projects. Currently I am not brave enough to try, but by watching, I feel likemI am getting some classroom training. I enjoy seeing the antique clothing, and of course your sewing machine could not be any sweeter!

I may not comment often, but I sure enjoy checking in!

Dear Donna,
So glad you feel like you're getting some vicarious experience :} One of these days you may just decide to plunge in and sew, come what may.

That's what I did: lurked and lurked and finally said, "Oh well, here I go".

Meanwhile, it's good you're having fun and dropping in!