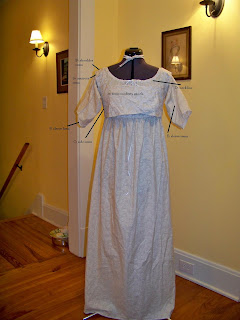 Let us start our tour with the bodice, the first part of the my mockup dress to be sewn. If you haven't read Part 1 of this series of posts, have a gander to find about what I am doing and the sources I used.

As always, please click on the images to see much larger versions of them.

Photo: front of dress, viewed inside out

Back Seams
When I started the dress, the first thing I did was to seam up the back piece with the two side back pieces. Since the back of the bodice would get a great deal of stress, I used a two-part seam, called the flat-fell seam, that was used during the period for women's garments that took great stress. Most of us who have done period sewing are familiar with this seam, as it's endlessly useful, and I found it made sense for this area of the bodice. 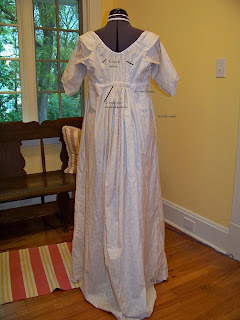 First, I attached a side back piece to the back piece, right sides together, and backstitched the seam with a half-inch seam allowance (per Sense and Sensibility pattern instructions). Each backstitch measures between 1/16" and 1/8" long. Guided by Frances Grimble's translation of period French sewing manuals in The Lady's Stratagem (p. 311), I basted the pieces first, to hold them steady, then drew the seam line with pencil, and then stitched. It is exceedingly difficult to backstitch a perfectly straight line without such helps.

Photo: back of dress, viewed inside out

Then I trimmed off one seam allowance to 1/8". On the wrong side of the fabric, bit by bit I finger-pressed down the remaining seam allowance 1/4" to cover the trimmed raw seam allowance, and bit by bit, hemmed it down, each stitch about 1/16" from the next. I kept the stitches as small and even as possible so that the dress, which would be considered a plain wash dress, would wear well and so the seam would sit smoothly. Because of the curve of the seam, I had to ease this hem in, but in hand-sewing that's easy to do because when you make small stitches, your fingers can manipulate the fabric into place. As I hoped, from the outside the double seam stands out just a wee bet and gives a faint shadow line, the curving in of the seam making the back look small. (See the photo above, plus the photo of the neckline interior for seam details.)

Photo: back of dress. If you look at large version of image you can see the bodice back seams. Note that I am not happy with the gathering of the back of the dress...the stroked gathers is discussed in the post after this one. 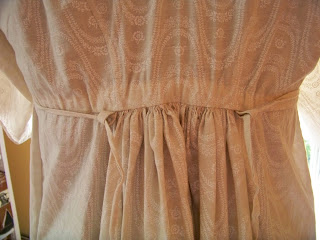 I did the same for the other back piece.

Notes:
Photo: dress shown inside out, and displaying the interior flaps. 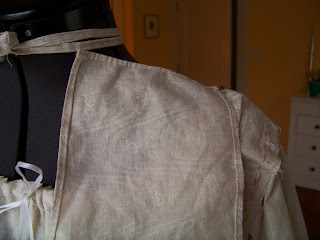 The drawstring dress is constructed with the exterior fabric gathered into a drawstring, but inside, there are also two separate flaps, sewn to the side seams and the shoulder seams, that when the dress is donned, lay across the bust, each lapping the other, and pinned shut. These flaps help the exterior look smooth and help hide stay lines from showing through flimsy fabric.

Because Regency seamstresses were as practical as their forebears in finishing raw edges, I forewent hemming the raw edges of these panels an instead, making a tiny 1/8 hem, running stitched it. Stitches measure 1/8" to 1/16" long. To keep the running stitch from catching on anything or puckering, for every 4-6 stitches, I inserted a back-stitch. This was easy to do, as I ran my needle through the fabrics and loaded it on to the needle for those 4-6 stitches, then pulled the thread through, and right after, made the backstitch. Then repeated. It created an easy rhythm. 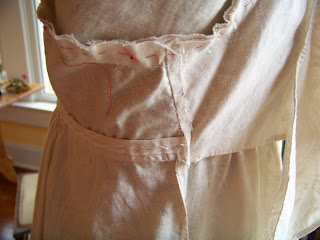 The side seams were treated the same way.

Photo: side seams: flat-fell seam constructed of backstitch, one allowance trimmed and the other hemmed down over it. Armscye is also visible, with the basting stitches still left in it. Underneath those stitches you can see the back-stitching...the backside of backstitches look like continuous overlapped stitches.

Neckline
The Sense and Sensibility pattern called for a front facing to be cut on the bias, seamed to the raw edge of the neckline, and then turned in and hemmed down. The result would not only finish the neckline but also serve as a channel for the neck drawstring. 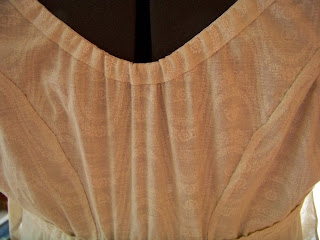 Having read Costume Close Up, and knowing this dress design dated to 1795, not long after the garments examined for Costume Close Up, I assumed that the makers would probably not cut the facing on the bias, but on the straight grain, as bias cuts waste fabric. As Linda Baumgarten had written, "[c]ertainly th extreme waste of material that results from cutting bias binding would have been unacceptable in the 1700s. In fact, it may not have occurred to eighteenth century seamstresses and tailors to try it." (p. 7)

So that's what I did. Easing the facing round the sometimes steep curves of the dress was not easy, but again, because I was going stitch by stitch by hand, I could vary the tension on the fabric and manipulate it into place. Nevertheless, there are 2-3 places where there is a pucker.

What to my surprise to learn from Jennie Chancey through Your Wardrobe Unlock'd, that the original dresses she has seen have facings cut on the bias! There went my theory, pouf.

Jennie said that certainly some dressmakers might have cut straight of grain, so my method was conceivable, but even by 1795 folks were cutting bias...I am guessing that they saw just how much of a pain it was to ease the facing around the curves, and then try to gather the dress, and found that bias worked better. Oh, for a scholarly treatment of this change, for it portended great changes in dress cutting down the road! 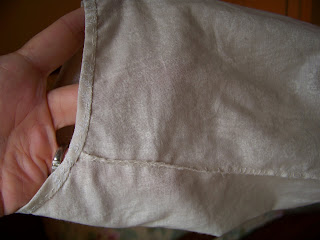 The sleeve ends are hemmed with a very narrow hem, each stitch about 1/16" apart for durability. You can see this easily in extant dresses. Before I set the hem, I basted it together, and left in the basting stitches.

Photo: sleeve seam and sleeve edge hem. You can see the basting stitches left in the hem, and the overcast stitch used to finish the sleeve seam is also clear.

So there we have the bodice. Next up, the skirt portion of the dress.

Other Regency Garment Documentation
Before I leave you, here's more information on where you can get useful documentation on specific stitches used in Regency garments. Gloria, author of In the Long Run ("Empire Waists? Nothing better!") blog, has documented the stitches she has used on her black velvet spencer and red open robe.

She notes, among other things, that Past Patterns'
"Circa 1796-1806 Lewis & Clark Era: Empire Gown" has excellent documentation. I have got to get that pattern. Saundra Ros Altman's patterns are superb. The dress that pattern is taken from is a simple day dress and so the documentation would be very useful. Although, like any individual dress, it has its quirks, like the back construction.
Posted by ZipZip at 9:34 PM

Really helpful! I'd love to see more pictures of the whole garment to understand where the details fit in though.

Dear AlohaAroha,
I am glad the information is helpful, and you're right, I do not have enough photos of the complete garment. Hmmm...how about this? In the next post I will include a picture each of the full front and back, and add numbered markings showing the spot where each detail shot comes from...then I can number the detail photos so you can match them up.
Very best,
Natalie in Kentucky